Trumble, Turnbull, Bernardi and the future,

Robert Menzies had already served as Prime Minister of Australia (1939-41), but he believed that the non-Labor parties should unite to present a strong alternative government to the Australian people.

They shared a common belief that Australians should have greater personal freedom and choice than that offered under Labor’s post-war socialist plans.

Yes, the Liberal Party was formed as a drive against Socialism.


(From Wikipedia) Cory Bernardi (born 6 November 1969) is an Australian politician and former rower. He has been a Senator representing the state of South Australia in the Australian Senate since 2006 and is the leader of the Australian Conservatives, a minor political party he founded in 2017.
He is a former member of the Liberal Party, having represented the party in the Senate from 2006 to 2016.

Malcolm Trumble Turnbull went against Menzies’ movement away from the socialist side of politics. He moved this former conservative party into the same arena as the socialist Labor Government and so disenfranchised many of the party’s conservative base.

This will be interesting to watch:

Climate Doomsayers Can't Get It Right 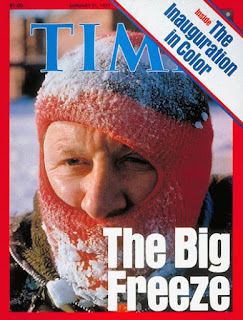 Larry Bell for Newsmax (link) looks back on "the good old days."

Remember that "other" climate change catastrophe . . . the one where we were warned (even before SUVs) about how we were prematurely bringing on the next Ice Age?

Yeah, even back in the chilly 1900s that was our fault also.

Scientists worried that deforestation was increasing Earth’s reflectivity, causing too much sunlight to reflect back into space rather than warm the surface as it was "supposed to."

The alarmists want to forget that they had predicted doom and gloom. AND not once! The alarmists try to throw doubt on this by saying that it was only one careless report.

Go to Popular Technology and you will find (link)


As Larry Bell points out, there had been previous icy climate scares.

On Oct. 7, 1912, the Los Angeles Times alerted readers, "Fifth Ice Age is on the Way: Human Race Will Have to Fight for Existence in Cold." By Aug. 9, 1923, the situation had already become desperate, causing the Chicago Tribune to declare on its front page, "Scientists Says Artic Ice Will Wipe Out Canada."

Of course, anyone with an ounce of sense knows that temperature trends are cyclical and, after the cooling 70s, the planet began to warm again.


Yup, those same CO2-belching smokestacks which were previously causing hell to freeze over were now setting the planet ablaze. The only salvation would be to shut them all down, immediately pass the U.N.’s Kyoto Protocol to cap carbon, and subsidize lots of windmills and sunbeam collectors underwritten by hedge fund carbon offset trades which later made him a very wealthy guy.

Now the Russians are saying we are heading for another Little Ice Age - or Worse.

Larry Bell is an endowed professor of space architecture at the University of Houston where he founded the Sasakawa International Center for Space Architecture (SICSA) and the graduate program in space architecture. He is the author of “Scared Witless: Prophets and Profits of Climate Doom”(2015) and “Climate of Corruption: Politics and Power Behind the Global Warming Hoax” (2012).