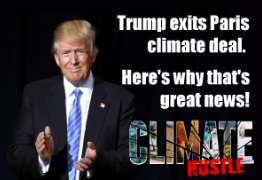 Get ready Australia!
CFACT will soon be on the way, and we’ll be unleashing our secret weapon ... Climate Hustle.
Yes, we're pleased to announce Marc Morano and I will be heading Down Under to several cities where theaters are now booked for the Australian premiere of Climate Hustle …
Seats are already selling out!

Why is CFACT going to Australia?
For starters, Australia has a large number of freedom-loving folks, just like you and me, who are fighting the good fight against climate extremists. In fact in many cases, they’re fighting against the same radical, power-hungry Green groups we’re fighting against here in the U.S.!
Our Aussie friends tried to break free from the UN treaty process, and almost succeeded when they elected Tony Abbott prime minister a few years back. But then Australia's Big Green Empire struck back and removed him from power.
Now they're ready for the return of sane climate and energy policies. They’ve been asking us for years to come … and next week CFACT will answer that call.
Will you help us take the fight to the Greens in Australia, and even further broaden our global battle against climate radicalism?
You know the drill. CFACT”s got what it takes, but nothing happens without you. Our friends make our work possible. You have never let us down. We're counting on you once again now.
As you know, Australia is one of America's staunchest allies and dearest friends. The continent teems with unique flora and fauna and is blessed with abundant energy resources. How ironic is it that Australians are bracing for energy starvation amidst such plenty.

Would you believe that last year South Australia was stricken by a massive blackout?

That's right – those expensive, inefficient wind turbines the government planted across the land were not up to the job of keeping the lights on. CFACT’s good friend in Australia, Joanne Nova, reported last summer that some 90,000 people went without power in sweltering Australian heat wave. Unbelievable!

Little wonder Australians have launched their own petition demanding their government join the United States and make a clean “CLEXIT,” a climate exit, from the UN’s disastrous Paris climate pact.

This is important. WE must support them.

If both Australia and America can work together to oppose a UN climate alarmist power-grab and promote smart energy policies, the greater part of two of the world's continents will light up like a beacon of hope for all mankind.

Don't be tempted to let Australia fail. The climate cautionary tale their negative example would provide is just not worth it. (Besides, we've got Angela Merkel’s Germany for that).

The time is perfect right now to strike a blow for, freedom, science and a bright energy future for Australia.

The only factor needed is you. Will you step up right now and help CFACT shine a light Down Under?
America and Australia have long been in it together. Let's stand together now.
For nature and people too,