Seven things that National Geographic is confused about Climate Change

National Geographic has a link:


7 Things to know about Climate Change

However, it looks more like Seven things that National Geographic is confused about Climate Change.

NATGEO 1: Earth's temperature goes up and down from Year to year.....

Yes, so far, so good. However, they continue:


But over the past half century it has gone up a lot.

Above is the lower troposphere temperature as produced from the RSS data set. Note the two peaks at 1998 and 2016 with much lower temperature between the peaks. This is definitely not shown in the
NatGeo's FAKE graph:

The Wood For Trees graph (Figure 1) is from satellite data. Again National Geographic is wrong in saying:

Satellites probing the atmosphere have documented a clear warming trend.

A new report on the State of the Climate in 2016 authored by Professor Ole Humlum which is based exclusively on observations rather than climate models was published last month by the Global Warming Policy Foundation (GWPF). (LINK)

Among the key findings of the survey are:
Prof Humlum said:

“There is little doubt that we are living in a warm period. However, there is also little doubt that current climate change is not abnormal and not outside the range of natural variations that might be expected.”

NATGEO 2. Carbon Dioxide warms the planet and we've increased the amount in the air since the 1960s.

IN the Laboratory this may be true, however, in the atmosphere, there is the logarithmic affect of CO2 (LINK) 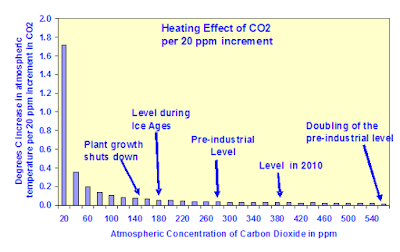 As can be seen from the graph, the most warming comes from the first 60-80 parts per million. NatGeo says, and we have no reason to disbelieve them, atmospheric CO2 has increased from 316ppm in 1960 to 404 in 2016 (although an independent source tells me the current atmospheric level of CO2 is 397 ppm.)

NATGEO 3: We're sure. More than 9 out of 10 climate scientists agree.

Oh! NO. Not the old unscientific appeal to authority. And not the old discredited 97% of scientists (from several false studies) These figures have been debunked so many times (eg here, here, here) it is amazing that alarmists like NatGeo are not embarrassed to still include it in arguments.

Really? As far as Antarctica is concerned, NASA (LINK) says this is not true.

A new NASA study says that an increase in Antarctic snow accumulation that began 10,000 years ago is currently adding enough ice to the continent to outweigh the increased losses from its thinning glaciers.

The research challenges the conclusions of other studies, including the Intergovernmental Panel on Climate Change’s (IPCC) 2013 report, which says that Antarctica is overall losing land ice.

What about melting Arctic Ice?

According to NOTALOTOFPEOPLEKNOWTHAT (link)

The Superhot Arctic Refuses To Melt!

We know that Arctic sea ice extent has been at relatively low levels this past winter. However, most of the deficit has been on the periphery, mainly in the Barents Sea, or way outside the Arctic anyway, areas which would soon melt away anyway.

The natural consequence of this reduced ice coverage is that enormous amounts of heat have been escaping from the oceans during the Arctic winter, a phenomenon that is part of the Earth’s thermostat.

However, largely as a consequence of this low ice extent, the spring melt has been slow to arrive.

Normally, the Arctic reaches maximum extent on Feb 28th, yet this year extent was still above that day’s level on 13th March, and in the last week has actually been growing again.


OK, OK, I hear you say, what about Greenland?

Again from the above link to NOTALOTOFPEOPLEKNOWTHAT:

In the meantime, Greenland continues to blow away all records with the expansion of its ice sheet.

Shame on you, National Geographic, Weather is not climate. And even NOAA said extreme weather events are not caused by man-made climate change.

As explained by James Taylor (link):


According to NOAA’s new publication, Explaining Extremes of 2013 from a Climate Perspective, there is no discernible connection between global warming and 2013 extreme weather events such as the California drought, Colorado floods, the UK’s exceptionally cold spring, a South Dakota blizzard, Central Europe floods, a northwestern Europe cyclone, and exceptional snowfall in Europe’s Pyrenees Mountains.


Coverage of Extreme Events in the IPCC AR5

NATGEO 6.  Extinction of Animal and Plants.

Wikipedia is not a very reliable source, however, their link on extinction of African species (link) reveals:
Nothing unusual happening here, folks, let's move on.


Well, it may be the fastest growing cost of energy. The only renewable energy source that can provide permanent base-load power is hydro. In Australia, lunatic devotion to wind and solar renewables has caused South Australia into periods of black-outs. The state of Victoria has this week closed down their last coal-fired power station and will follow South Australia into the era of power outages.

Sorry National Geographic. Your alarmist report has been exposed as flawed.