The role of women as described by female Muslim activist 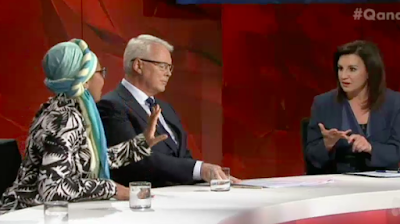 On a recent Q&A program Muslim activist Yassmin Abdel-Magied had a heated exchange with senator Jacquie Lambie. Magied maintained Islam treated women well and was compatible with Western democracy. Lambie strenuously disagreed with Magied who has just been on a taxpayer funded trip to the Middle East promoting her recent book. Magied went to the Muslim nations shown in the following map published in an article written by Caroline Overington:


Women in Saudi Arabia live under an iron fist male guardianship system, whereby women cannot participate in various activities without male permission and/ or supervision. They are not allowed to obtain a passport to travel abroad without such permission; they are not permitted to drive, or swim in public pools or beaches, or compete in sporting events without male supervision. Women who venture outdoors must wear the abaya (the full body covering) and often the face is covered, too. Punishments for sexual ‘crimes’ such as adultery and even rape include flogging and stoning (for the woman, not the rapist.)

Women live under a male guardianship system similar to that which operates in Saudi Arabia. Women require the permission of a male relative to re-marry if widowed, and Emirati women – as opposed to low-paid foreign nannies and domestics – generally do not work outside the home. The first woman minister of state for the UAE, Maitha Salem Al-Shamsi was appointed as recently as 2004. She appears in public fully veiled. Flogging and stoning for adultery, pre-marital sex and prostitution are commonplace, and it is illegal for Muslims to marry non-Muslims. Human rights lawyers in Abu Dhabi have expressed concern over what they regard as the criminalization of sexual assault victims.

The international human rights organisation, Human Rights Watch, recently warned expatriate woman intending to live in Dubai – in compounds, since Western women cannot live freely outside the Western compounds - to educate themselves about the lack of rights for women and girls under a Sharia-inspired legal system, which may mean that reports of domestic violence will not be prosecuted. Women, including foreign women living in Dubai, can lose custody of their children to their former partners, who are then able to prevent mothers from seeing their children. Also, the Sharia-inspired courts often apply an interpretation of the law, under which ‘it’s permissible for a husband to physically chastise his wife and it is a crime for a woman to work without her husband’s permission’ according to Human Rights Watch.

Sharia-inspired law actively discriminates against women in Qatar, where the deplorable state of women’s rights is comparable only to Saudi Arabia. Under Qatari law, women, unlike Qatari men, cannot pass on their nationality to their children. There are no women in Qatar’s Shura Council and sex without marriage is punishable by flogging or death. Marriages for women are generally arranged. Women are generally required to wear the abaya in public, and in many cases reveal only their eyes. The men, too, wear traditional dress, such as white cotton robes and either red or white head scarves, of the type rarely seen on the ABC’s QandA
.
Kuwait:

Women in Kuwait are among the most emancipated women in the Middle East. The level of education for women is high, and Kuwaiti women were granted the right to vote in May 2005. Four years later, four women were elected to the Kuwaiti parliament for the first time. Many of these changes have been encouraged or inspired by American human rights agencies, as part of a rebuilding effort in Kuwait after Iraqi forces were repelled.

A strong women’s rights movement has existed in Jordan for many decades. While marriages between Muslim women and non-Muslim men are not recognized, and honour crimes still occur, Jordanian women have a high level of education and workplace participation.

A 2015 report by Amal Syam, Director of Women’s Affairs Center in Gaza, says Palestinian women live within a “strong patriarchal culture” where gender stereotypes “limit women’s rights and gender equality.” A quarter of the women surveyed reported physical violence, and more than 10 percent reported sexual violence, with the majority of perpetrators being husbands and other male family members. Families give preference to boys’ needs over girls’ in education, inheritance, and other rights. Early marriage constitutes a major area of concern.

A western-style parliamentary democracy and the rule of law extends to the women of Israel, which is the only country in the Middle East to ever elect a female prime minister (Golda Meir.) Women sit in parliament and vote in elections. Israeli law prohibits discrimination based on gender in employment and wages. Israeli women serve in the military and participate in all areas of public life. Orthodox Jewish women cover their hair in public, and Orthodox men are able to refuse a woman’s request to divorce.

Female genital mutilation, honour killings and rape are the most serious issues facing Egyptian women, who also endure forced marriage, and live under a brutal regime of laws based on Islamic Sharia. A man can divorce his wife for any reason while a woman needs grounds to file for divorce, and polygamy is legal for men only. Women inherit half what a man inherits.

Female genital mutilation affects upwards of 90 percent of women, who suffer lifelong health problems, including potentially fatal birth complications, as a result. Conflict with neighbouring Somalia has forced many women and girls into refugee camps, where security forces use sexual violence as a method of control. A 2015 Human Rights Watch report suggests that women in Sudan have few rights to property and almost no agency over their own lives. The abaya is required for women venturing out in public.

In a comment attached to the Overington article Daniel notes:


Islam and sharia know no separation of Mosque and State. Fact. Sharia law is theocratic - made by Allah and unchangeable - interpreted and applied by religious authorities (Ayatollahs, fatwas etc). To say otherwise is apostasy (shirk) under sharia – punishable by death. Fact. By contrast, Australian law, and our legal and political system is democratic. It is based on popular sovereignty where our secular law (not mandated by Christianity or any other religion) is changed by peoples’ Parliaments. Sharia law is therefore fundamentally incompatible with Australian law and Western democracy.

The Muslim ummah is divided into a majority that are sharia compliant and a reformist minority that renounce sharia law for democracy - technically apostates. Fact. Therefore, only reformist Muslims can abide by their citizenship pledge to abide exclusively by Australian law and Australian values. Fact.  Quran 33:36 and many other Ayat say very clearly that Muslims must obey sharia law in preference to any other law. Anyone who says otherwise is simply lying (taqiyya - sharia mandated deception) or ignorant.  '...It is not for a believing man or a believing woman, when Allah and His Messenger have decided a matter, that they should [thereafter] have any choice about their affair. And whoever disobeys Allah and His Messenger has certainly strayed in to clear error...'. Q 33:36.

Sharia law is fundamentally incompatible with Australian law and the core cultural values it embodies for the systemic reasons set out above but also because of its abhorrent content. Fact. This is because sharia law punishes with death or barbaric punishments (death, stoning, amputation, whipping, confinement until death, immolation, and crucifixion): apostasy, blasphemy, adultery, homosexuality, drinking and gambling, and ‘making mischief’ (insurrection Q 5:33); and punishes theft by amputation. Sharia prohibits religious freedom. It permits slavery.

Sharia does not allow equality before the law (non-Muslims are inferior - Q 3:110 and 5:51 and 98:6). It employs barbaric lex talionis  - ‘eye for eye tooth for tooth’. Sharia discriminates against women (women are inferior Q 4:34) and non-Muslims. It enables underage marriage and thus child rape, rape in marriage, wife beating, honour killing, polygamy, female genital mutilation, first cousin marriage, gender segregation and seclusion and forced veiling (niqab and hijab). Women must prove rape of suffer punishment as an adulterer. Divorced women are not entitled to an equal share in marital property and lose child custody after divorce. The man can initiate divorce without fault by saying talac three times (‘triple talac divorce’). Muslima get only a half share in inheritance (Q 4:11), their testimony is worth only half and cannot marry non-Muslims.

Very dangerously, sharia law mandates Islamism (Q 33: 36 and 9:111 and 2:216). Islamism is the sharia mandate that all sharia compliant Muslims must use all forms of jihad to subjugate all people to sharia law.  Jihad has many forms - word, speech, dawa (proselytising), money (Halal taxes and banking and jizya), hostile immigration and demography (hijra) and subversion (infiltrating Government, universities, media and judiciary - see the Muslim Brotherhood ‘strategic plan’ captured in the Holy Land Foundation terrorist funding trial in the US - stealth jihad and civilizational jihad).  The worst of all forms of jihad is violence and terrorism (Q 2:191-3; 8:12, 8:39; 8:60; 9:05; 9:29, 47:4). Sharia is therefore terroristic, supremacist, imperialistic, genocidal, Jew hating and fascist. Therefore all moral, sensible Australians are very rightly opposed to sharia law and see its spread as an existential threat.

To the extent that sharia is moderate it is because its tenets are not enforced not because sharia is moderate in its tenets. But many people simply will not address this by learning what sharia law is by independent study of the Quran, Hadith (Sunnah) (sharia’s two primary legal sources), Sira (Muhammad’s biography) and Tafsir (explanatory notes on the Quran). See for example the Team B II report of the US Center for Security Policy or Wikiislam. They choose to remain deliberately ignorant for fear or because it would destroy their multiculturalist Utopian fantasy. Those that support sharia through their deliberate ignorance betray their fellow Australians including reformist Muslims (that renounce sharia, jihad and Islamism) that Australians welcome and strongly support.