One Thousand Years of Summer Temperatures in Northeastern Canada 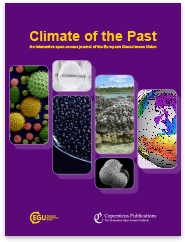 M. Naulier, M. M. Savard, C. Bégin, F. Gennaretti, D. Arseneault, J. Marion, A. Nicault, and Y. Bégin.
Abstract. Climatic reconstructions for northeastern Canada are scarce such that this area is under-represented in global temperature reconstructions. To fill this lack of knowledge and identify
the most important processes influencing climate variability, this study presents the first summer temperature reconstruction for eastern Canada based on a millennial oxygen isotopic series (δ18O) from tree rings. For this purpose, we selected 230 well-preserved subfossil stems from the bottom of a boreal lake and five living trees on the lakeshore.
The sampling method permitted an annually resolved δ18O series with a replication of five trees per year. The June to August maximal temperature of the last millennium has been reconstructed using the statistical relation between Climatic Research Unit (CRU TS3.1) and δ18O data. The resulting millennial series is marked by the well-defined Medieval Climate Anomaly (MCA; AD 1000–1250), the Little Ice Age (AD 1450–1880) and the modern period (AD 1950–2010), and an overall average cooling trend of −0.6 °C millennium−1. These climatic periods and climatic low-frequency trends are in agreement with the only reconstruction available for northeastern Canada and others from nearby regions (Arctic, Baffin Bay) as well as some remote regions like the Canadian Rockies or Fennoscandia. Our temperature reconstruction indicates that the Medieval Climate Anomaly was characterized by a temperature range similar to the one of themodern period in the study region. However, the temperature increase during the last 3 decades isone of the fastest warming observed over the last millennium (+1.9 °C between 1970–2000). An additional key finding of this research is that the coldest episodes mainly coincide with low solar activities and the extremely cold period of the early 19th century has occurred when a solar minimum was in phase with successive intense volcanic eruptions. Our study provides a new perspective unraveling key mechanisms that controlled the past climate shifts in northeastern Canada.
CO2 Science explains:
According to Naulier et al. (2015), the latest IPCC assessment report shows that "northeastern Canada is poorly represented among existing millennial temperature reconstructions in the Northern Hemisphere," and as a result, they say that "better knowledge of regional past climate variations registered in natural archives is needed." Thus, it was the objective of this team of eight researchers to fill this data void by developing the "first summer temperature reconstruction for eastern Canada based on a millennial oxygen isotopic series (δ18O) from tree rings.

In accomplishing this objective, Naulier et al. examined both living and subfossil trees from a boreal lake, Lake L20 (54.94°N, 71.40°W), ultimately producing an annually resolved δ18O series that served as a proxy for summer (Jun-Aug) maximum temperatures.
And what did the proxy show?

As shown in the figure below, the millennial record revealed a cooling trend over the length of the record of 0.6°C, which they report is "in the same order of magnitude as the decrease of summer-months mean temperature reconstructed using pollen in the North American tundra," citing the work of Viau et al. (2012), as well as in other northern regions of high latitudes, citing the additional works of Kaufman et al. (2009) and Esper et al. (2012).