To view the whole article plus images click:
http://carbon-sense.com/wp-content/uploads/2016/12/mines-love-greens.pdf


The Labor/Green coalition in Australia has declared war on coal, oil and gas and industries that use them. So why is Big Mining not fighting back?

These companies employ competent geologists, physicists and chemists who could tell them that CO2 is not a pollutant, that it is not the primary driver of climate and that climate has been changing since time began. They must know there is no scientific justification for the green war on hydro-carbon fuels - but none of these big miners speak out against this baseless war on their products. Some even waste shareholder funds producing glossy brochures promoting the green agenda – the BHP Billiton document “Climate Change: Portfolio Analysis” reads like it was produced by the Greens.

Big Mining is not that dumb. Their climate “concern” is more motivated by self-interest - they see long-term profits flowing from the silly green agenda. They are also political cowards wanting be loved by guilt-stricken billionaires, business haters from Hollywood and the green mob controlling the ABC/BBC.

Wind and solar power are indeed “free”, but to extract electricity from them is not free – it needs turbines and solar panels, generators and transformers, transmission towers and power lines - all of which boosts demand for metals like steel, copper, zinc, nickel and rare earths.

Moreover, wind and solar are very diffuse power sources and need large areas of land together with webs of access roads and power lines in order to collect significant power. The heavy machinery needed for construction, maintenance and replacements in these green power networks provide ongoing demands for petroleum and mining products. Before one watt of green electricity is generated for consumers, green power has boosted demand for most products of Big Mining. 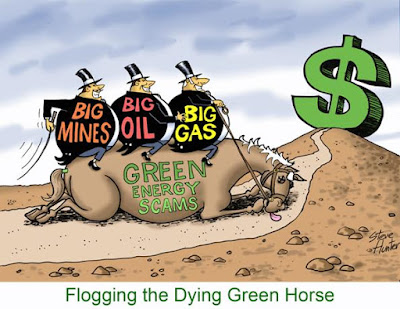 Green power also needs back-up power ready to swing into action immediately the wind drops (or blows a gale) or clouds, fog, snow, rain, dust or night-time obscure the sun. This is great news for reliable energy suppliers capable of rapid backup, which usually means gas. So Big Gas loves Big Green - it is secretly delighted by the war on coal and the force-feeding of Green energy, as this will cause a boom in gas demand. Lead, nickel, cadmium and lithium miners are also delighted with the soaring demand for energy-storing batteries.

Intermittent energy producers like wind and solar also cause destructive fluctuations in electricity supply and prices – prices can fall to zero on a sunny, windy afternoon, but soar during still, sunless periods. Coal power stations cannot adjust quickly to this destructive variability in electricity demand and prices and will be sent broke, thus providing even more markets for gas.

Big Gas is thus delighted to secretly support the war on coal as it will do wonders for the demand for gas; but they fail to understand that once Greens have destroyed coal power, they will then turn their green guns onto gas.

Uranium producers love the greens. They know that if coal and gas are banned from power generation, and all hydro-power sites are “world-heritage protected”, all that is left to stabilise the electricity grids of modern society is nuclear power.

Even coal producers see short-term benefits in supporting inane green ideas like carbon capture and burial. This would greatly increase the amount of coal needed to generate the electricity consumed to collect, separate, compress, transport and bury exhaust gases as well as to refine and fabricate all the metals needed for gas collectors, compressors and pipelines. Even more silly is the academic dream to burn coal using oxygen, not air, for combustion to reduce the huge quantity of exhaust gases to be handled (mainly by removing nitrogen). This will consume even more energy and metals. Long term, the main beneficiaries of this industrial silliness will be nuclear power and uranium miners like Rio and BHP.

So Big Mining can extract benefits from green energy while earning political credits. And their PC executives can polish their green credentials in their posh suburban circles by supporting the silliness.

On the debit side are the usual victims - taxpayers and consumers of coal, oil, gas, electricity and metals; and employees and shareholders of industries being forced to close or emigrate because of expensive and unreliable electricity.

BHP’s green sympathies bite them back in South Australia, when their big Olympic Dam Mine was affected by blackouts:
https://wattsupwiththat.com/2016/12/05/dash-for-gas-green-south-australian-government-throws-in-the-towel-on-renewables/

There is little new about batteries – battery powered cars were running on British roads over a century ago - they were pushed out of the market by petrol power.

Batteries just store energy made elsewhere and all have a finite life. Every battery needs primary energy and resources for production, recharging, replacing and recycling. Every step produces its own emissions.

Even wind and solar are not emissions-free once construction, maintenance, and life-cycle replacement are fully accounted for.

Greens think everything can be solved by “recycling”. But recycling batteries, like so many green dreams, may not save energy or emissions. There are real costs in collection, de-construction, separation and refining of the sometimes complex mess of metals and plastics in the hundreds of batteries we use. This recycling process may consume more energy than a well-organised mining/refining/fabrication operation using just one or two primary mineral deposits feeding an efficient battery factory.

Batteries have an important place in our lives. But they are not “emissions free”.

Nobody today is making a viable battery-powered vehicle:
http://breakingviewsnz.blogspot.com.au/2016/12/bryan-leyland-things-you-know-that-aint.html#more

Disclosure:
Viv Forbes has Tertiary qualifications in geology, physics and chemistry and experience in coal, oil, gas, investment analysis and mineral economics. He holds shares in a small Australian coking coal exporter which will benefit if the war on carbon sends more Australian industries to Asia.
www.carbon-sense.com,