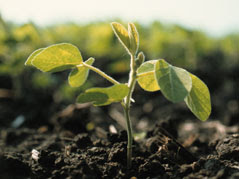 Soybean (Glycine max) is one of the top 15 crops grown worldwide. It is a highly prized legume appreciated for its many agricultural and industrial uses. Compared with other major staple food crops, it is exceptionally nutritious; it is high in protein content, calcium, thiamin, dietary fiber, iron, manganese, phosphorus, vitamin C, vitamin K, and several B vitamins. In the future, soybean production is expected to increase. Thus, there is much interest in learning about this important crop and how to increase its seed yield without expending additional costs and resources. And to this end, many scientists continue to study the impacts of rising atmospheric carbon dioxide (CO2) concentrations on soybeans.

In an important work that recently caught our attention, James Bunce -- a USDA researcher from the Crop System and Global Change Laboratory in Beltsville, Maryland, USA -- reports that seed yield increases have been observed by many scientists in soybean plants grown under elevated levels of atmospheric CO2. However, he notes that there are often large response differences among cultivars, the reasons for which "are not clear." In a search for answers, Bunce (2015) therefore set out to conduct his own study to investigate the impacts of elevated CO2 on soybean seed yield. More specifically, he grew three soybean cultivars (Fiskeby V, Ripley and Spencer) from seed to harvest in indoor controlled environment chambers at either 380 or 560 ppm CO2, as well as three cultivars (Mandarin, Holt and Spencer) in an outdoorenvironment at either 451 or 659 ppm CO2 using free-air CO2 enrichment (FACE) technology. Measurements were made during the course of the growing season in an attempt to determine the cause of seed yield variation among cultivars at enhanced levels of atmospheric CO2.