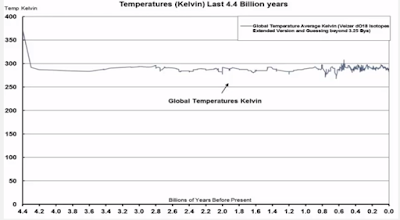 1000Frolly analyses statements made by prof Brian Cox on "our" ABC's QandA.

He probably meant a temperature rise of 2ºC???

Scaremonger Cox replies: "There are some shocking predictions....."  "Absolute Absolute consensus!" (Consensus is not a scientific term, Brian. It is a political term. Ed)

1000Frolly then points out that Brian Cox brought out an entirely fraudulent GISS graph and continues to annihilate Brian Cox' "evidence" whilst also pointing out some minor blemishes in Malcolm Robert's case.

Perhaps 1000Frolly is being a little pedantic when he says that Malcolm is wrong referring to NASA when he actually means GISS (Goddard Institute of Space Studies) Actually GISS is an arm of NASA and mostly is written NASA:GISS. (Brian also referred to NASA and not NASA:GISS.)

1000Frolly points out that millions are dead because of "climate action" - in particular ethanol is mandated in many countries; depleting food supplies and forcing up the price of food. 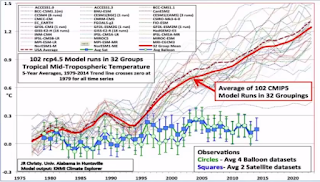 Malcolm says: "The models have all been proven wrong - hopelessly wrong."
Brian: "Well, no. You cross check them with the past and they do quite nicely."

Brian, do some research. You are out of your field. The models failed to predict the past.

Although Brian Cox says the opposite, CO2 is not the cause but the effect of both changes in sea surface temperature and changes in air temperature.

Fairfax is second only to the ABC in its witless support for alarmism and belief in man-made global warming (AGW). The 20.8.2016 edition of the Newcastle Herald featured 2 particularly stupid alarmist articles.

The first was by Wendy Squires and it was squalid in its sneering and vapid insult of recently elected senator Malcolm Roberts who recently made mince-meat of the darling of the alarmist groupies, professor Brian Cox.

Squires said Roberts bleated, was a climate change denier and a climate change conspiracist. She also said Roberts was presented with evidence of AGW by professor Cox when he produced his NASA temperature graph. I suppose if professor Cox cannot understand that the graph he produced was rubbish we can hardly expect a second rate journalist to have the intelligence to understand.

The evidence of tampering is even more plain when one looks at the adjustments by NASA in this graph from Steve Goddard. The 2014 version is the one the poseur professor Cox used.

Squires ends her petty article by claiming Roberts will drown in the alarmist shibboleth of rising seas. As we see the seas around Newcastle where Squires regurgitated this rot are not rising; sea level fell to 1983, rose to 2000 and has been stable since:

Government support for renewable energy in Australia runs to 10s of billions. Every cent of that vast expenditure is wasted because renewables do not work; they cannot supply grid power at a base load or peaking level. That fact hasn’t stopped the ALP because Industry Super Funds invest heavily in renewables. They do so because of ALP government mandates. These investments have turned out badly. It is a huge financial churn with government subsidies and union controlled super masking the complete uselessness of renewables. Given this it is hardly surprising for an ALP, ex-union hack like Conroy to come out and vilify a genuine politician like Roberts with no skin in the corrupt renewable process and who is exposing the only reason for renewables, alarmism.

Conroy’s article is a litany of the usual arguments alarmists throw around: comparing sceptics to cigarette advocates, using appeals to authority, censoring, the science is settled. It is complete junk and Conroy is revealed as just another ridiculous politician.

The serious aspect of Conroy’s rubbish is however the vast money his party will waste if re-elected.

Conroy says the ALP will seek to commit Australia to net zero pollution by 2050 and a 45 per cent emissions reduction on 2005 levels by 2030, consistent with the advice of the Climate Change Authority.

This level of delusion will destroy Australia. In 2010 a bunch of green zealots called Beyond Zero Emissions proposed, like Conroy, zero emissions of CO2. This plan was examined by 2 engineers, Peter Lang and Martin Nicholson who agreed it could be done at a cost of over $4 trillion (in 2010) and a reduction in electricity use of over 60%. That’s 4 times Australia’s total annual GDP and going without electricity for over 4 days of the week.

Despite the ulterior motives of alarmists like the fools Squires and Conroy their madness is that they actually believe this destructive and deluded nonsense. If they get their way, the Australian economy will be destroyed. The fact alarmists like Squires and Conroy and Fairfax are so stridently attacking Roberts shows they realize he is a danger to their belief in alarmism. This is why Malcolm Roberts, an engineer, must be supported.
Posted by Geoff on August 21, 2016 2 comments: