The alarmists never rest. Despite UNESCO giving the Great Barrier  Reef (GBR) a clean bill of health alarmist scientists have increased their doom and gloom propaganda. Members of the James Cook University centre for excellence for coral reef studies, Andrew Baird and Terry Hughes have declared the reef has been all but destroyed by man-made global warming. When professor Hughes advised his students of the parlous state of the GBR there wasn’t a dry eye in the lecture theatre.

This current bleaching has been a bad one. The El Niño which has caused it was as big as the 1998 event. This 2016 bleaching event from the El Niño was expected. Despite this coral extent on the GBR has been increasing in most areas:

Baird and Hughes and fellow hysteric Hoegh-Guldberg have been sweating on such an event to justify their professional pessimism for some time. In their definitive 2003 paper the group stated:

Projected increases in carbon dioxide and temperature over the next 50 years exceed the conditions under which coral reefs have flourished over the past half-million years.

This is not true in a number of respects. Firstly the models which the alarmists rely on to generate such doom and gloom predictions have been proved to be wrong and inadequate.

Secondly, recent past conditions on the GBR have been shown to be warmer than current conditions.

Two papers which were published immediately before the alarmists’ 2003 paper plainly show that in the 1700s temperatures around the GBR were 1.5ºC higher than today’s temperature: 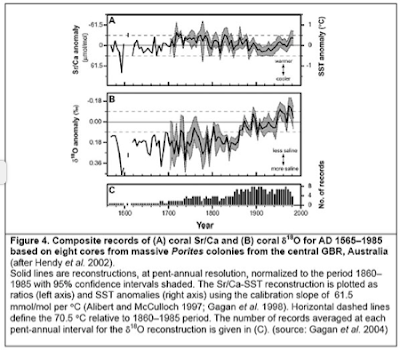 Hoegh-Guldberg and his fellow alarmists should have been aware of this historical perspective.

Instead they have resorted to base alarmism which as usual the MSM have lapped up. So instead of a natural cycle we have the imminent death of the GBR caused by humans and their CO2.
Posted by Geoff on April 22, 2016 No comments: