Last year the shrill were proclaiming 2014 to be the hottest year ever. But when pushed, they umm-ed and ahh-ed and said they were only 38% sure.

Those same shrill are at it again. 2015 the hottest scream the headlines, but the data show that it was nowhere near the hottest ( and the previously claimed 'great 2014' is even further from the truth.) 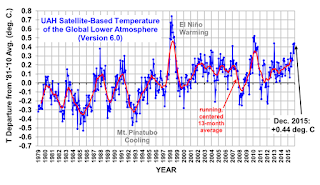 But we are only talking of the era of satellite data.


“As with any cult, once the mythology of the cult begins falling apart, instead of saying, oh, we were wrong, they get more and more fanatical. I think that’s what’s happening here.”

“Seventy percent of the earth is oceans, we can’t measure those temperatures very well. They can be off a half a degree, a quarter of a degree. Even two-10ths of a degree of change would be tiny but two-100ths is ludicrous. Anyone who starts crowing about those numbers shows that they’re putting spin on nothing.”

The Late Great Professor Bob Carter, in the book TAXING AIR, spoke of the range of temperatures in Australia.

Over about the last 150 years, this represents a range of temperature across Australia of 73.7ºC.

These and similar local statistics represent climate extremes and their impact is as rare weather events. More typical daily temperature ranges are usually less than half of this, varying between as little as 5º in the maritime tropics in summer to perhaps as much as 30º in arid inland regions in winter.

"A range of temperature across Australia of 73.7ºC."

The shrill are worried about a small 2ºC rise in Global temperatures.

This blogger, this week walked from his kitchen onto the deck outside and experience a 2ºC rise in temperature. Fortunately it was not catastrophic.

As far as those shrill reports "Warmest Year  EVER" how wrong can they be?

Looking at the longer term in history (again from TAXING AIR) 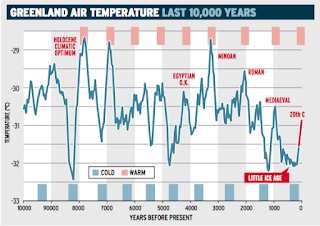 Going back in history, getting warmer as we go,
I think I am beginning to see a pattern here.... 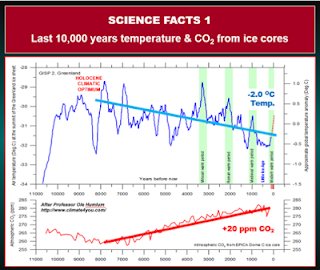 As Professor Carter put it:

The graph reflects regional Greenland and not global temperatures, but that does not make it a cherry pick, because many other lines of evidence are consistent with the Holocene Climatic Optimum (HCO) being marked by temperatures 1-2 deg. C above those of today.

And what about the future? You can bet the shrill will claim this year, 2016, to be the warmest year ever.

You say: "They Wouldn't Dare!"

NewScientist disregards the MWP, and all the other warm periods including the Holocene Climate Optimum and has already declared 2016  (yes, this current three week old year) to be

– the hottest year ever 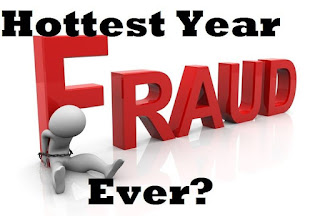