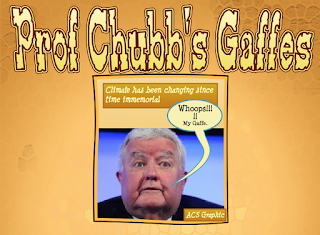 Professor Chubb will this week end his 5-year term as Chief Scientist.


"I can only say to scientists: don't flinch. Do your work; do it according to the trusted methods of ethical science and talk regularly to the public ... their support, and the weight and quality of evidence, must always trump make-believe."


However, the shrill (including presumably Prof Chubb) have turned the " trusted methods of ethical science" on their head and reversed the Scientific Method.


Here the study begins with a proposed theory (man's CO2 emissions are causing catastrophic global warming) and the investigation consists of an attempt to find observations and make experiments which might confirm the theory.

Really? As Climate had changed since the beginning of time, I don't think that there could be many who "don't believe the climate is changing..."  Is Professor Chubb confused? Does he mean people who have not been fooled by the CAGW Hoax? Has the good Professor kept up with the science? Is he not aware that, although atmospheric CO2 keeps rising, there has been a ~20 year plateau in the warming?

Thank Heaven there ARE scientists who "do it according to the trusted methods of ethical science" countering the government scientists pushing the falsified AGW hypothesis. 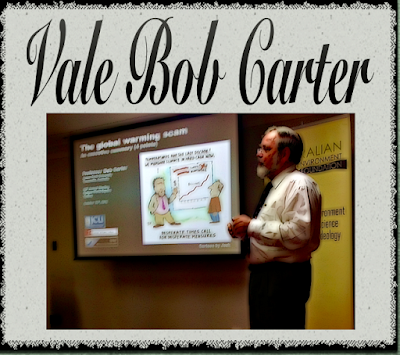 This is just a repeat of the misinformation in their Global Warming and Climate Change Myths. These "myths" have all been debunked by this blog's SS Myths debunked.

CO2 is NOT a pollutant. The EPA over nearly a decade sought legal vindication for its claim CO2 is a pollutant despite relying on discredited IPCC ‘science’. The final Supreme Court verdict in 2014 gave the EPA the right to regulate existing large scale emitters of CO2 but not the vast number of small ones.

More importantly the Supreme Court specifically resisted the EPA’s intention to interpret statute according to its bureaucratic criteria. The Supreme Court strongly advocated the EPA was bound by Congress. The upshot of this is if a Republican sceptic gets into the Whitehouse when Obama’s term ends with republican majorities in both houses this decision will change if new legislation that CO2 is not a pollutant is introduced. In short currently CO2 is a pollutant by virtue of the EPA’s ideological position and political fiat not the science.

But aren't the shrill trying to claim 2014 and then 2015 were the warmest years? Anyhow:

The Truth:It hasn’t warmed since 1998. Longer according to McKitrick’s peer reviewed paper. Again, the IPCC agrees there has been a pause since 1998.

So does the MET (LINK)


With the release of the 2014 HadCRUT4 data by the UK Met Office, and the previous release of global temperature data by Berkeley Earth, Nasa and Noaa, the main conclusion to be drawn from the data is that 2014 was a warm year, but not statistically distinguishable from most of the years of the past decade or so meaning that the “pause” in global annual average surface temperatures continues.

Although SS claims humans are the dominant force behind change, this is not so.

All the lies "Myths" cited by SS have been debunked. Perhaps they will now take down this post of falsehoods?

The Truth is that Bob Carter was the informer and UNSkeptical UNScience (SS) were misinforming deliberately.

Bob Carter will be sadly missed. 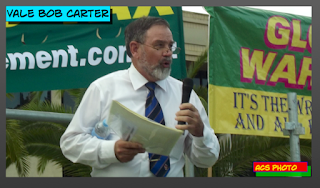 
The world would be a much better place if it were a world with more Bob Carters.


We will remember him. He was our clearest voice of truth