Malcolm Roberts and Q & A

The recently elected senator, Malcolm Roberts was invited onto Q & A. Q & A is the ABC’s premier current affairs program. Like the rest of the ABC it is implacably pro alarmist. So at first blush having a declared sceptic on this program would seem to indicate some balance by the ABC.

Unfortunately, this was not so. On the rest of the panel were 4 devout alarmists. Linda Burney clearly was out of her depth and contented herself with scorning and insulting Malcolm Roberts.

Lily Serna, the described mathematician, gushed and fluttered her eyes at professor Brian Cox, surrounded herself with hyperbole and moral platitudes and Greg Hunt was his usual unctuous self.

The real revelation was professor Brian Cox. Some assumed Brian Cox would present a reasonable viewpoint. This was quickly contradicted by his first speech on climate change. The facts were shocking he said. In fact, they were so shocking he said shocking again.

Not one word that come out of Cox’s mouth had any verisimilitude. The temperature was rising, and not just rising but accelerating he said. Malcolm quickly referred to the Central English Temperature [CET] record and the verified temperature pause and data corruption.

The word corruption enraged Cox who at this early stage was producing graphs of temperature and CO2 quicker than James Hansen gets arrested. Jones piped in with another glowing description of Cox’s prestige as a premier scientist and Lily gushed in Cox’s direction.

So it went with the usual ABC balanced audience consisting of dangerously intelligent young people, according to Greg Hunt, laughing vigorously at Malcolm at every opportunity and calling professor Cox a legendary scientist. And Hunt embellished Cox’s arguing from authority and consensus with examples of his government’s support of consensus such as the Paris accord debacle.

Generally, Malcolm was diminished at every opportunity. It often became absurd with Burney concerned with sinking islands and young people swimming in August.

One cannot do justice to every cliché of alarmism which was trotted out by the alarmists on the panel. Every one of these clichés can be dealt with and repudiated with just minimal recourse to facts and figures. The myths of alarmism are listed here.

The take away point from the Q & A is the abysmal ignorance of the general public and the political class which allows people like Cox getting away with outrageous falsehoods. Cox was not selected for nothing to appear on this program. He is photogenic and fluent and charismatic. Frankly it didn’t matter what he said because he said it with such panache and charm he could have been reading the directions to change a light bulb. He is after all an ex pop star. (see below -Ed)

That is why it is so important that Malcolm Roberts is now in parliament. For years he has been bashing his head against the brick world of money, vanity and ideology which is alarmism. Now he has a cache of authority by his election. What he should do now is arrange for some of the world’s leading climate scientists who can match the likes of professor Cox to come to Australia and give talks at parliament under his auspices. People like Judith Curry, Roy Spencer, Ryan Maue and Ross McKitrick and in Australia Stewart Franks, Peter Ridd and Mike Asten. Prominent sceptics need to be supported and given exposure. If Malcolm can achieve that he truly will be a success.

All in all Malcolm did well. He said some great things none better than what he said about education and the difference between teaching kids what to think rather than how to think. The Q & A set up was a failure and it will be interesting to see if he is invited back to the ABC.
- - - - - - - 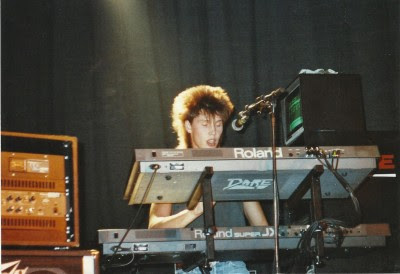 Brian Cox was in two bands - d-ream and Dare.

Perhaps his support for the falsified Man made global warming hypothesis can be explained by the Dare Song - We don't need a reason.