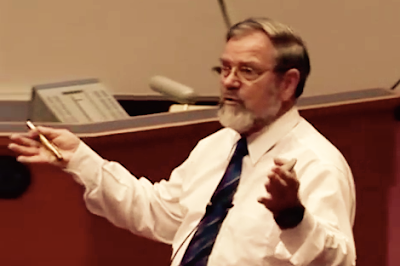 Revisiting a 2011 address by Professor Bob Carter  on "Climate Context as a basis for Better Policy", given at the University of Southern Queensland, Toowoomba.

The main theme of Bob's address was that Governments should not waste money on trying to stop climate change, but rather should use funds preparing for Climate Caused Disasters.

Some of the main points:

There is no such thing as a Global Climate. It doesn't exist. It's an imaginary construct for the scientists to think about and play with. Nobody lives in a Global Climate. We all live in a local climate and those local climates have risks; and it's the job of the government to assess those risks and have a policy to deal with them when they eventuate.

......aside from tsunami-risk, Australia’s greatest environmental hazards are all climate-related. Droughts, floods, cyclones and large bushfires — Australia has them all in spades.

It must be recognised that the theoretical hazard of dangerous human-caused global warming is but
one small part of a much wider climate hazard that scientists agree upon, which is the dangerous natural weather and climatic events that nature intermittently presents us with — and always will.

It is absolutely clear from, for example, the 2005 Hurricane Katrina disaster in the US, the 2007 floods in the United Kingdom and the tragic bushfires in Victoria, Australia in 2009, that the governments of even advanced, wealthy countries are often inadequately prepared for climate-related disasters of natural origin.We need to do better. 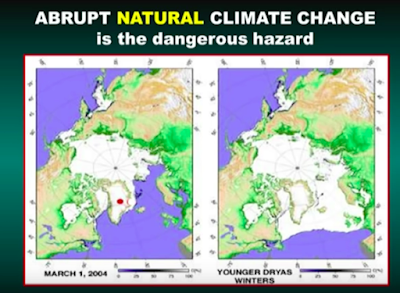 The Younger Dryas is clearly observable in paleoclimate records from many parts of the world.

(Bob now speaking as if a third person) Doesn't (Bob Carter) know that weather is short term stuff and climate is these long trends over thousands of years. So, is this a weather event? Or is it a climate event? Well, of course, it's both. Because the processes of weather and climate are the same. 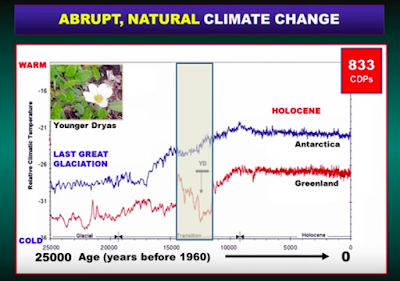 If you have a really cold winter, you will grow sea ice. A perfectly feasible climate hazard....you will have sea ice advancing way down the North Atlantic.....yet not a single government that I know of, in countries that surround the North Atlantic Ocean is considering this as a climate hazard. They are all running around like chooks without heads worrying about speculative, dangerous global warming; totally ignoring the real climatic risk that their citizens are subjected to.

NZ does this better than us. They have a natural hazard centre.

“That is as statistically accurate as CSIRO’s computer models. That is a result of chance and that is what the computer models also produce. No proven skill.”

“The money we are squandering at the moment, and it runs into billions, on hypothetical global warming” could be directed a climate caused disasters." 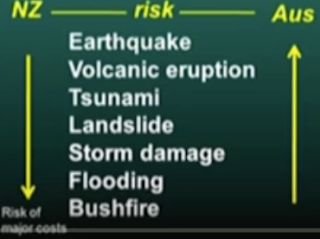 Comparing Australia and NZ, the order of risks is reversed. NZ's biggest climate caused risk is Earthquake whilst Australia's is Bushfire.

Australia’s greatest environmental hazards are all climate-related. Droughts, floods, cyclones and large bushfires — Australia has them all in spades. (P252)

Do we really need a national climate policy, then (P255)

You bet: for climate events and change are Australia’s greatest natural hazards.

The appropriate response to climate hazard, then, is national policies based on preparing for and adapting to all climate events as and when they happen, and irrespective of their presumed cause.

Every country needs to develop its own understanding of, and plans to cope with, the unique combination of climate hazards that apply to it alone.The planned responses should be based upon adaptation, with mitigation where appropriate to cushion citizens who are affected in an undesirable or uncontrollable way.