The (Watered Down?) COP21 Agreement explained 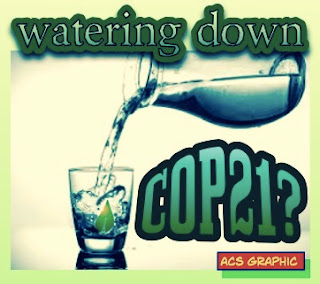 Various people have examined the COP21 agreement including

* nothing coming out of Paris will have any impact on the climate
* whatever new commitments the agreement contains are not specific or enforceable
* still no requirements for transparency and independent confirmation of emission reductions
* goals are far in the future, long after current politicians are gone
* this is more about income redistribution than climate

All worth reading, but perhaps the easiest quick read was by

1. Everybody gets to do what he wants to do, without repercussions other than official notes in the media of progress vis-a-vis what he said.
2. Nothing has to be done that “threatens” food production. Not “reduces”, but threatens. This should allow cutting down forests and the slash-and-burn style of agriculture, and exempt agricultural practices, including beef production, from carbon-taxes, fuel surcharges or the need to make them less CO2 heavy.
3. Financing is neither fixed, nor firm, but voluntary and without a timeframe. Financing is still at the stage of ‘determining’ what others may need. There is no “SHALL” involved with collection or redistribution of funds.
4. Developed countries have to produce data on what they are doing as to emissions reduction. Developing countries don’t have to do so, only if they want to.
5. No tracking of emissions claims is permissible if the host country finds the questioning intrusive or offensive.
6. The Convention is going to appoint two “Champions” for 2-year terms (overlapping 1 year) to run around the world and talk to others about doing their bit. My bet: Obama and Merckel, once they are out of office.
7. The next global “stocktake” will take place in 2023. I couldn’t find a date for the next COP meeting of equivalence to this December 2015 Paris meeting.
8. The Agreement will come into ‘force’ after 16 April 2016 OR when 55 Parties accounting for at least 55% of global emissions sign the agreement. China is at 28%, India at 6% and the Rest of the World small Parties at 30%. The ROC have no reason not to sign. All they need is China.http://cdiac.ornl.gov/trends/emis/tre_coun.htmlhttp://cdiac.ornl.gov/trends/emis/tre_coun.html
9. Cheating has been big. Anti-“double accounting” rules, whereby British firms pay the Brazillians to plant trees of carbon-offset credits will no longer allow Brazil to claim those same trees in their emissions reduction claims, have had to be imposed because there was cheating everywhere and you couldn’t believe the numbers.
10. Surprise! Surprise! After signing any Party can bow out in 3 years, effective 1 year later. Shorter than the Kyoto Agreement! By mid-2020 anyone can be out prior to the next big conflab.
Summary:
Do as you plan on doing or end up doing. No sweat. No money committed or flowing for the time being. We’re gonna get a couple of celebrities to talk it up and have grand photo-ops. Don’t worry about measuring performance success officially until 2023. If you or your electorates or other power groups get really annoyed, you can opt-out in three years, long before you are held to account for what you said today.
Except for the half-billion dollars these jokers just spent (of our tax money), and the social licence they gave each other to raise taxes and redistribute economic activity within their countries, there is nothing in this to provide comfort for the alarmists. No sense of urgency, no sense that the world is about to die/fry. The “last chance to save the planet” is now 2023.
Posted by Geoff on December 15, 2015 1 comment: