In order to support the man made global warming hoax, the shrill have to push the false idea that each year was hotter than the previous year and each year they say that year XXXX was the hottest on record.

Last year, 2014 has been described as the hottest year: eg


2014 has taken the title of hottest year on record.

How accurate are these claims?

With the help of Marc Morano's CLIMATE DEPOT, these claims are debunked.

Should the COP21 delegates base billion contributions to the Green Climate Fund on "science"  from these clowns?
Follow this trail:


The year 2014 ranks as Earth’s warmest since 1880, according to two separate analyses by NASA and National Oceanic and Atmospheric Administration (NOAA) scientists.

But Were they sure?


The Nasa climate scientists who claimed 2014 set a new record for global warmth last night admitted they were only 38 per cent sure this was true.

In a press release on Friday, Nasa’s Goddard Institute for Space Studies (GISS) claimed its analysis of world temperatures showed ‘2014 was the warmest year on record’.

The claim made headlines around the world, but yesterday it emerged that GISS’s analysis – based on readings from more than 3,000 measuring stations worldwide – is subject to a margin of error. Nasa admits this means it is far from certain that 2014 set a record at all.

So, does the plateau in global warming exist? BEST says that there has been at least 10 years hiatus.


Numerically, our best estimate for the global temperature of 2014 puts it slightly above (by0.01ºC) that of the next warmest year (2010) but by much less than the margin of' uncertainty (0.05'C).'Therefore it is impossible to conclude from our analysis which of 2014, 2010 or 2005 was actually the warmest year.

Even so, the highest year could not be distinguished. That is,of course, an indication that the Earth’s average temperature for the last decade has changed very little. 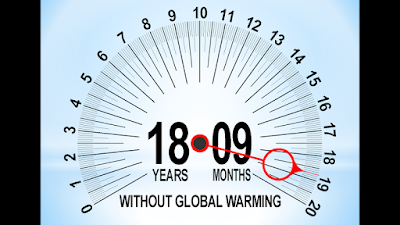