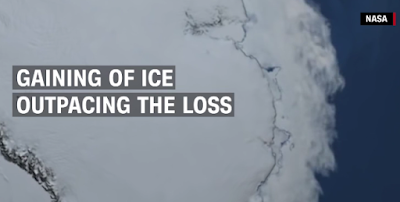 “The good news is that Antarctica is not currently contributing to sea level rise, but is taking 0.23 millimeters per year away,” Zwally said. (LINK)

Good news for the COP21 delegates too. They do not have to worry about Sea Level Rise.

The Paper by Zwally et al was published in the  Journal of Glaciology published by: International Glaciological Society (link)

Mass changes of the Antarctic ice sheet impact sea-level rise as climate changes, but recent rates have been uncertain. Ice, Cloud and land Elevation Satellite (ICESat) data (2003–08) show mass gains from snow accumulation exceeded discharge losses by 82 ± 25 Gt a–1, reducing global sea-level rise by 0.23 mm a–1. European Remote-sensing Satellite (ERS) data (1992–2001) give a similar gain of 112 ± 61 Gt a–1. Gains of 136 Gt a–1 in East Antarctica (EA) and 72 Gt a–1 in four drainage systems (WA2) in West Antarctic (WA) exceed losses of 97 Gt a–1 from three coastal drainage systems (WA1) and 29 Gt a–1 from the Antarctic Peninsula (AP). EA dynamic thickening of 147 Gt a–1 is a continuing response to increased accumulation (>50%) since the early Holocene. Recent accumulation loss of 11 Gt a–1 in EA indicates thickening is not from contemporaneous snowfall increases. Similarly, the WA2 gain is mainly (60 Gt a–1) dynamic thickening. In WA1 and the AP, increased losses of 66 ± 16 Gt a–1 from increased dynamic thinning from accelerating glaciers are 50% offset by greater WA snowfall. The decadal increase in dynamic thinning in WA1 and the AP is approximately one-third of the long-term dynamic thickening in EA and WA2, which should buffer additional dynamic thinning for decades.
DOI: http://dx.doi.org/10.3189/2015JoG15J071