COP21 Cop this! A big "nothing-burger." Both standouts gone, BUT the SHRILL will not WIN! 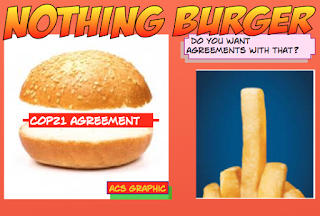 The second standout has fallen. COP21 here we come.

In October 2014, Lord Monckton warned of the TWO STANDOUTS:  THE SECOND - the push to get rid of Tony Abbott.

Sir David King from the Climate Task Force, chief scientistic adviser to the UK Government  was asked whether all the nations of the world were now, in principle, ready to sign COP21: (link)


....there are two standouts. One is Canada. But don’t worry about Canada. They’ve got an election in the Spring of 2015 and we and the UN will make sure the present government is removed. He was quite blunt about it.

In that post we noted Ezra Levant's word where he called the MSM The media Party:

I call them the "Media Party", because they’re campaigning full-tilt. You just can’t trust them to give you the straight news.

Take the CBC. Thomas Mulcair has promised the CBC a $115 million bonus if he wins. Justin Trudeau has outbid him. He says he’ll pay the CBC $150 million if he wins. So CBC journalists are campaigning against Harper like their own jobs depend on it.


Justin Trudeau just won a majority government. Get ready for the pain.

He promised to raise taxes, raise spending and put our country back into debt.
He said he'd abandon our military mission against ISIS terrorists, and take in 25,000 Syrian migrants by Christmas.

His ideas will be a disaster. Government will grow. Personal freedom will shrink. Our national security will be weakened. And our foreign policy will tilt far left. Trudeau is the candidate who said he admires China for its “basic dictatorship”, and promises to normalize relations with Iran.

Meanwhile, in an upcoming article to be in American Thinker, one of the most venerated climate scientists has said that COP21 (like COP conferences preceding it) will be a big "nothing-burger."

Remember China has agreed to keep INCREASING CO2 emission until 2030!

Many nations do not accept the new COP21 agreement.

And the climate itself has not heard of, nor been signed onto, the "consensus."

No global warming for ~20 years while the "rascally" carbon dioxide keeps rising.

The MSM will hail the results of COP21 but it will be a big "nothing-burger."