Pope Francis: A conversation or a Lecture? 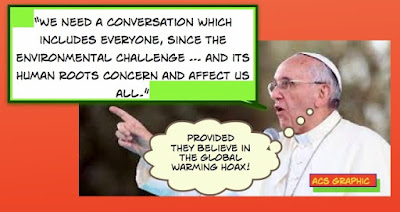 A Conversation … or a Lecture?

We must “enter into dialogue with all people about our common home,” Pope Francis recently told the US Congress, frequently quoting from his Laudato Siencyclical. “We need a conversation which includes everyone, since the environmental challenge … and its human roots concern and affect us all.”
I couldn’t agree more. Unfortunately, the pontiff seems more interested in a lecture than a conversation on climate change, energy and economic development, and improving the lives of Earth’s poorest families.
The pope’s advisors believe humans are destroying our planet and dangerously changing its climate. Instead of seeking dialogue with those who disagree with them, they denounce and try to silence contrarian voices. They dominated the Vatican’s April 2015 summit, while experts who question claims that climate change is manmade or dangerous were not invited or permitted to speak, or even ask questions during the summit; nor was their input considered during the encyclical’s preparation.
Many of those advisors (Jeffrey Sachs, Hans Schellnhuber, Peter Wadhams, Naomi Oreskes and others) hold views that can best be described as extreme: on energy use, climate change, population control, and how much poor nations should be “permitted” to develop. They are deeply involved in and profit greatly from a $1.5-trillion government-funded climate crisis industry that owes its continued existence to perpetuating the manmade global warming narrative and silencing those they vilify as “climate deniers.”
They have little knowledge of the enormous complexities of Earth’s climate system – and little concern about the impacts their policy prescriptions have on US or EU working classes, or Third World poor. Those people may be protected against climate risks created by computer models; but their livelihoods, living standards, upward mobility, health and welfare are gravely impaired by policies imposed in the name of preventing climate and weather events that are no different, more frequent or more extreme than those which have affected and afflicted humans throughout our presence on this miraculous planet.
Read More at TownHall.com
Posted by Geoff on October 05, 2015 1 comment: