Another debunking of one of UNSkeptical UNScience -SS's- so-called "Myths." This time debunking their #34

"Unquestionably, the U.N. Intergovernmental Panel on Climate Change (IPCC) was formed to build the scientific case for humanity being the primary cause of global warming. Such a goal is fundamentally unscientific, as it is hostile to alternative hypotheses for the causes of climate change."

He starts by suggesting something highly questionable isn’t open to being questioned. What he seeks to do is suggest, by inference, that the IPCC has an agenda, and this distorts the reports they produce. In other words, Spencer (and others) suggest that the IPCC exaggerates what the science says in favour of anthropogenic global warming. It is perfectly legitimate to question this assertion, since Spencer and others offer no evidence to support it.

However,  SS is wrong when they say Spencer and others offer no evidence to support it.. The IPCC in their PRINCIPLES GOVERNING IPCC WORK (Para 2) and again on their page on Organisation History:

"...to assess on a comprehensive, objective, open and transparent basis the scientific, technical and socio-economic information relevant to understanding the scientific basis of risk of human-induced climate change, its potential impacts and options for adaptation and mitigation 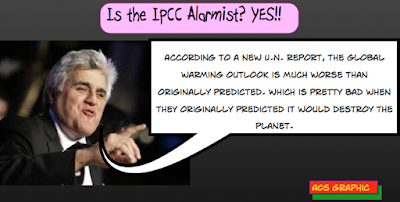 But seriously alarmism is exactly that: exaggerated, hyperbolic, emotional, half-true, not true.

Schneider set the tone with his infamous advice about selling the message. His double ethical bind doesn’t exist; as a scientist if he has to think about telling the truth he isn’t a scientist; he was an advocate full stop.

They’re all advocates with their dreadful, always wrong predictions like Flannery, or their odious comparisons, deniers are worse than Nazis from Hamilton.

Alarmists think anyone who disagrees with AGW is insane and needs to be treated.

Alarmists have to invoke “scary scenarios”, to quote Schneider, because their solutions to this non-existent problem are themselves so alarming.

In technical terms the alarmism of AGW is seen in its estimates of climate sensitivity (see items 7, 34, 101).

Because alarmists use the wrong statistical methods they conclude temperature can go up forever (see items 30, 73, 91, 110). This is wrong.