The Shrill are ramping up the rhetoric as COP21 Paris nears. To scare people not taking day to day notice of the details, they sometimes create alarms that will really spook people, like the debunked mass extinction of species. 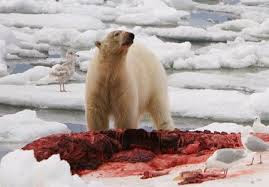 They try to pick a species that looks cute to the populace. That's why they settled on the polar bear.


Not what you would think if you were being attacked by a Polar Bear.  (Grim photo below from http://nynerd.com/polar-bear-attack-survivor/) 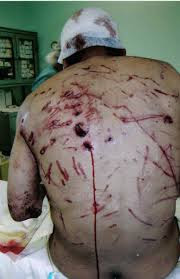 But don't worry, the cute Polar Bear population is increasing.

So the shrill looked around and sought something even cuter than the polar bear.

AH, the sea otter (see top photo.) But how to scare the population after many false alarms? Why, the shrill decided, we'll hand out condoms.

Condoms for humans could mean salvation for critters

An environmental group is handing out free condoms in Washington to save endangered species.

No, these are not special condoms for northern pike in an attempt to ward off a threat to struggling salmon stocks.

The condoms are ordinary "rubbers" in packaging that stresses the impact human population growth has in crowding species off the planet.

On Saturday, as part of World Population Day, the Center for Biological Diversity says it distributed 10,000 free Endangered Species Condom in 27 states where the group says species featured on the condom packages are most endangered.


And the Shrill say that; "Scientists say Earth is undergoing its sixth mass wildlife extinction."
Unfortunately there is no link to back up science.

In our debunking of UNSketpical UNScience's fake "Myths,"we addressed the SS myth that Global warming will cause mass extinctions of species and included a link to internationally recognised expert David Stockwell's piece in Quadrant:


The lesson of the ‘climategate’ emails, the ‘hockeystick wars’, and the recent ‘pause’ is that the IPCC reports have a tendency to be self-serving. Blind faith in the IPCC projections shows subjectivity, if not outright naïveté.  To the degree that studies base their estimates on a rate of warming far greater than observed, published extinction estimates from climate change should also be down graded. (Link)

Is the sea otter threatened? Well, not according to Defenders of WildLife:


Fortunately, the number of sea otters deaths from human conflict is slowly decreasing as a result of their protection under theEndangered Species Act and increased regulation of fishing nets.

Another failure by the Shrill!