Too Many Wild Cards in the Climate Game

Too Many Wild Cards in the Climate Game

Another Issue of "Carbon Sense” prepared for The Carbon Sense Coalition
by Viv Forbes and volunteer helpers. 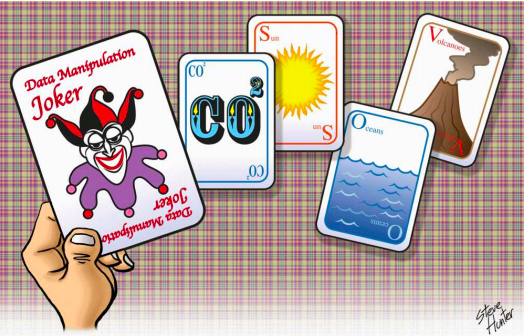 Climate alarmists claim incessantly that all bad weather is caused by man’s use of hydro-carbon fuels - oil, gas and coal.

They insist that man-made carbon dioxide is the trump card in the climate game. Their computerised models of doom assume ever-rising levels of carbon dioxide which will trump all natural climate controllers.

Unfortunately for their credibility, since at least the year 2000 global temperatures have trended level despite significant increases in atmospheric carbon dioxide.

The sun is the primary source of almost all of Earth’s heat. It is becoming increasingly clear that this gigantic heat generator, with its varying cycles and emissions, is an Ace in the climate game.

Then there are the massive oceans, whose vast heat capacity and ever-changing currents and oscillations also regularly trump the steady but tiny influence from man’s industry.

In order to explain the failure of their carbon-centric forecasts, the alarmists have thrown several other wild cards into the climate game. These include heat losses into the deep oceans and unexpected variations in earth’s cover of ice, snow, soot, particulates and volcanic dust.

Finally, they have created their own friendly climate Joker – data manipulation. They deal this card from the bottom of the pack onto the climate table to create artificial warming trends and heat wave “records” on demand. 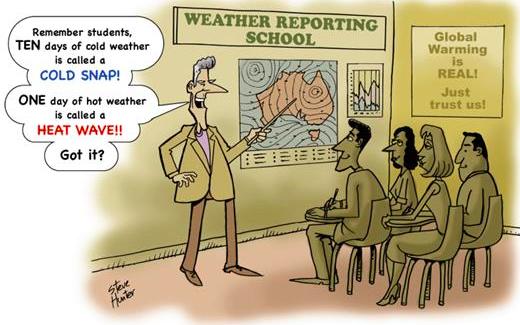 Obviously there are too many Jokers and Wild Cards in the climate game for one simple carbon-centric theory to win a forecasting game, except by cheating or chance.

This is why warmists have not won a “Forecast-the-Warming” game for at least 15 years.

We should spend Earth Hour giving thanks for warmth.

Just thirteen thousand years ago, Earth was in the grip of a deathly ice age. Sea levels were indeed much lower but much of the land surface was covered by thick sheets of ice. Life struggled to survive and many species were extinguished by the sterile suffocating ice.

Without any help from humans, Earth escaped from the ice. And as the oceans warmed they expelled part of their dissolved carbon dioxide which nurtured an enormous increase in plant and animal life.

But the ice still lurks near the poles, and Earth has suffered several cold relapses. The most recent “Little Ice Age” just released its icy grip about 150 years ago.

The modern warming phase ceased around the turn of this century – there are teenagers today who have never lived in a phase of rising global temperatures. And our sun is showing disturbing signs of reduced activity, which may presage a new cooling phase.

Earth is on a climate see-saw between a warm green globe and a frozen white wilderness. Unless you are a penguin or a polar bear, you should spend Earth Hour celebrating today’s warmth and giving thanks for our cheap, abundant hydro-carbon fuels which will help humans to survive any return of Global Cooling.

There is another scare in the unrelenting war on coal – “carbon monoxide”?

The carbon dioxide scare has proved baseless – it is difficult to maintain a scare against the benevolent gas that keeps the world green and supports all life. So some alarmists think that a carbon monoxide scare will fly?

Carbon monoxide gas is generated naturally by volcanoes, bushfires and some animal metabolisms, and traces are always present in the atmosphere of Earth and other planets.

It is indeed a scary gas at high concentrations – it is poisonous to air-breathing animals, inflammable in air and can cause explosions. But it oxidises easily and naturally to form a totally different gas - carbon dioxide, the gas of life.

Carbon monoxide can be produced by burning any organic matter in a confined place with insufficient oxygen. The exhaust pipes on older vehicles are the major man-made sources, explaining their use in car suicides. It was also produced from wood as a fuel in “gas generators” used to power motor vehicles during the petrol rationing era in WW2.

Carbon monoxide can be an unseen danger whenever wood, gas, coke, coal, dung, kerosene or cigarettes are burnt in stuffy closed rooms. This danger was once common in Warwick winters when, on really bitter nights, all doors and windows were shut tight and big logs were burnt in open fires. It is generated even now in NSW schools foolishly heated with un-flued gas heaters in poorly ventilated classrooms.

At the remotely-located power stations, the main gases released to the atmosphere are the two essential gases of life – water and carbon dioxide. This aerial fertilisation is noticeably encouraging plant growth on Earth.

Carbon monoxide is unlikely to be found above trace amounts in flue gases of modern coal power stations because operators continually monitor exhaust gases - its presence above trace amounts is a clear indication that not all of the carbon fuel from the coal has been burnt. In a well-designed power station, sufficient air is force-fed to ensure that every bit of hydrocarbon fuel is burnt.

The Climate Alarmist is a threatened species. Action needed:
http://scottishsceptic.co.uk/2015/03/16/campaign-to-save-the-climate-alarmist/

Ted Cruz: I don’t believe in climate change because I ‘follow the science’:
https://www.youtube.com/watch?feature=player_embedded&v=JX6nDrqUKKA

Submission by the Carbon Sense Coalition to the
Australian Senate Select Committee on Wind Turbines:
The submission: “Why Wind Won’t Work” can be downloaded as a pdf from:
http://carbon-sense.com/wp-content/uploads/2011/02/why-wind-wont-work.pdf

Many other relevant aspects of Wind Power are discussed here, and we commend them to the committee:
http://carbon-sense.com/category/wind-power/

We are strongly of the opinion that wind power should not get any special subsidies, mandates, tax breaks or protective targets.

The Grande Armee of Alarmists and Globalists has been pushed back to the suburbs of Paris. Things are looking desperate as the only active defenders of the faith are Obama, the UN/IPCC, the diehards of the EU, the left-wing media, the green billionaires club plus those camp scavengers who hope to share carbon tax spoils if the Green Helmets prevail.

Paris 2015 is now the crucial battle that we must win. The extremists want a binding agreement for the world to reduce global emissions by “at least 60% below 2010 levels by 2050”. (For Australia, that would probably reduce our per capita prosperity to 25% of 2010 levels).

We need to oppose every aspect of their agenda. In particular we need to demand that any international agreement on environment, energy taxes, emissions, climate reparations or sustainability has a “Get Out” Clause.

Keep the pressure on your local federal MP and Senator of all parties. “No binding Agreement in Paris and a ‘Get Out’ clause on anything agreed”.