Kingsman: the most subversive anti-AGW movie 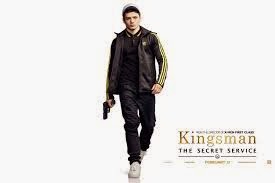 Some movies are unintentionally anti-AGW because they are so pretentious like Atavar or just plain stupid like Noah.

Some are subtle and sly in their critique of AGW like Interstellar, a great movie or Captain America: The Winter Soldier another great piece of cinema.

But there is nothing subtle or sly about Kingsman: The Secret Service; this movie presents in Technicolour the awful nature of alarmists; they are elitist, narcissistic and misanthropic. And riddled in hypocrisy.

The villain is Valentine, played by Samuel Jackson. Valentine is another tech billionaire who despises his fellow man for causing AGW. His solution is to kill off 99.9% of the human population.

His sales pitch to the rich and famous is classic alarmist agitprop. Valentine tells them that humans are a virus raising the temperature of the living Earth. If the virus isn’t destroyed the planet’s fever will worsen and either the planet will fight back and kill the disease of the disease will kill the planet.

The idea that humans are a disease or parasite has underpinned the AGW narrative and is espoused by all the leading AGW scientists and particularly AGW’s many rich supporters like Bill Gates.

In Kingsman Valentine is seen convincing Obama of his vision which is ironic since Obama’s chief scientist, John Holdren, is an avid supporter of forced reduction of humanity. In real life Obama would have taking no convincing.

Valentine, as the archetypal rich supporter of AGW,  has a tenuous hold on real life. He thinks he is living in a movie and can’t stand the sight of blood even though he is prepared to kill billions.

Valentine is the perfect portrayal of the elitist loon who supports AGW. He has made his vast wealth from his society and now as a matter of vanity will destroy that society. The thought that his lifestyle will cease when the society is destroyed doesn’t enter his thinking. This is cognitive dissonance on a grand scale.

Valentine implants chips in the chosen ones so they can resist the doomsday device he has perfected.

In a delicious twist all the elistists, including Obama (and Prince Charles) literally lose their heads when the device backfires.

The movie wittily portrays the religious nature of AGW belief when Valentine tests his device on a bible bashing Southern Baptist church. The message is plain: when religion claims to be fact trouble is inevitable. This is what has happened with AGW: it is religion masquerading as fact. Armed with the pseudoscience of AGW rich crackpots like Valentine can live out their dreams. At the end Valentine can’t tell reality from his ego generated bubble of fantasy.

The movie offers no formal solution to the blight of public corruption by the AGW scam and relies on a steadfast and very aggressive secret organisation to violently eradicate the AGW zealots and hypocrites.