Homogenising the America's Cup (and temperature data) (BOM or BUM?) 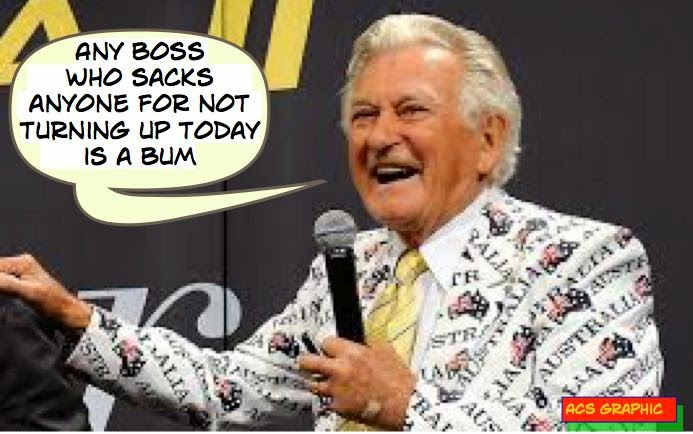 One of the longest held sporting records was the run of the New York Yacht Club defending the America's Cup. 132 years of successful defence of the cup.

The trophy was originally awarded in 1851 by the Royal Yacht Squadron for a race around the Isle of Wight in England, which was won by the schooner America. (wiki)

In 1983, after a seven race series, the yacht Australia ll won 4:3 against the American Yacht Liberty. Australia went berserk. People who had never even been on board a yacht celebrated with old salts who were covered with barnacles. Australia's rascally Prime Minister Bob Hawke virtually declared the day a National Holiday when he said:


"Any boss who sacks anyone for not turning up today is a bum".[link]

My old neighbour, a  genius sail maker and boat designer, then known as Bob Miller, had designed a revolutionary winged keeled yacht. At the time Bob was getting information that people were preying on his name and confusing people seeking yacht and sail designs. Bob decided to change his name but decided to keep the same numerology: Bob (3) Miller (6).

So he chose Ben (3) and looked around, saw a plastic "LEXAN", and so he would be the only one, introduced a new word Lexcen (6).

In a great article in the Australian, Graham Lloyd, referring to the "massaging" or "homogenising" of data from Climate bodies around the world, wrote:


"CRICKET legend Donald Bradman is a useful metaphor for the escalating global row over claims the world’s leading climate agencies have been messing with the weather.

David Stockwell, Australian Research Council grant recipient and adjunct researcher at Central Queensland University, raised the Bradman analogy in his submission to a newly formed independent panel that will oversee the operation of the Bureau of Meteorology’s national temperature dataset.


Great article, and I can't write like either Graham or David do.

Now, we really do not get much information regarding the methods for temperature "homogenisation."

Back to Newport, Rhode Island.

Imagine, for a moment, if the New York Yacht Club had heard about "homogenising." We know that they used any technicality to put competitors at a disadvantage. AHHA! They would have said! Of Course! "Homogenising!"  So let's assume that they had heard of the "scientific" homogenising.

And let us  assume that the New York Yacht club decided to apply a factor of 25% to Australia's gains from the winged keel.

SO, the NYYC's "homogenising" or "massaging" would be:


WOW! America wins another America's Cup! And believe me, if the NYYC had "known" of the anti-science "data massaging," there  would have not been any "hiatus" to their long run of wins.


Stockwell was highlighting public concerns at the BoM’s use of homogenisation techniques to adjust historical temperature records to remove anomalies and produce a national dataset called ACORN-SAT (Australian Climate Observations Reference Network — Surface Air Temperature). The panel, or technical advisory forum, which will hold its first discussions with BoM staff on Monday, was formed in December after a series of questions were raised publicly about the treatment of historic temperature records that has resulted in temperature trends at some Australian sites being changed from long-term cooling to warming.
Liberal senator Simon Birmingham, former parliamentary secretary to Environment Minister Greg Hunt, instructed BoM to fast-track the appointment of the panel, which was recommended in 2011 in a peer review of ACORN-SAT’s establishment. The make-up of the panel was announced by Birmingham’s replacement as parliamentary secretary, Bob Baldwin, in January.

In the meantime, controversy about homogenisation of climate records has exploded into a global concern after similar trend changes to those raised in Australia were identified in Paraguay and in the Arctic. Accusations of “fraud” and “criminality” have been made against some of the world’s leading weather agencies. There is now the prospect of a US Senate inquiry.

Respected US climate scientist Judith Curry has facilitated a wideranging debate on the issue, saying more research was needed, but that it is probably not the “smoking gun” for climate science, as some had claimed.
There is a long history regarding complaints about how climate data has been handled by authorities and how poorly those making complaints have been treated.

The general trend is made clear in a 2007 email exchange, now known as Climategate, between a senior BoM official and scientists at East Anglia University in Britain. BoM’s David Jones said Australian sceptics could be easily dissuaded if deluged with data.

“Fortunately in Australia our sceptics are rather scientifically incompetent,” Jones wrote. “It is also easier for us in that we have a policy of providing any complainer with every single station observation when they question our data (this usually snows them)”, he said.

Even better, noted East Anglia University’s Phil Jones, was to give troublemakers a big package of data with key information missing, making it impossible to decipher.

But more than seven years on, as the world’s weather bureaus report more and more broken temperature records and further examples emerge of incongruous adjustments, the pressure is building for a transparent process to finally untangle the numbers

In Australia, ACORN-SAT was created in 2009 to replace BoM’s so-called high-quality dataset after questions were raised about the quality and accuracy of that network.

ACORN-SAT, which the Senate was told this week is managed by a two-person team in BoM, uses information from a select range of weather stations and computer modelling to compile its national temperature record. The data is also used to help create the global temperature record.

The panel to oversee ACORN-SAT will be headed by CSIRO scientist Ron Sandland and includes a wide range of experts in statistics and mathematics.

Sandland tells Inquirer he will hold a teleconference with BoM on Monday to decide how the process would be run.

The panel was first recommended by a peer review in September 2011 headed by Ken Matthews. The peer review gave ACORN-SAT a glowing report, describing it as conforming to world’s best practice. But it also called for greater transparency, better communication and independent oversight.