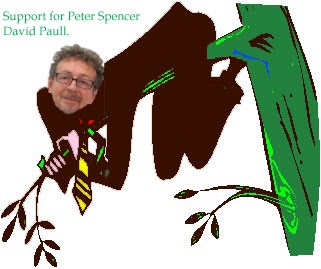 Lauded by the traitorous ABC, a Green activist bureaucrat has resigned in a merde-scented shower of self-regard, pique and high moral principle.

David Paull was an ecologist working for the Office Environment and Heritage (OEH) and a former greens candidate.

Paull was upset about new gas and fracking projects and the proposed amendment to the vile Native Vegetation laws in the wake of the tragic shooting of fellow officer Glen Turner by a farmer over land clearing disputes.

I have never heard any green, Paull included, take a public stand about the high rates of suicide by Australian farmers ( also downplayed by the ABC) or support people like Peter Spencer whose lives have been ruined by the green tainted environmental laws controlling farmers. Not once.

For that alone Paull and his ilk deserve to be called bastards along with Bandt and the rest of these pampered hypocrites who put nature ahead of human interest.

So on the face of it this is a good thing; a green bastard removes himself from being able to cause trouble within the bureaucratic ranks. Good on the state government for facilitating this.

In respect of Paull’s noble concern for gas and fracking. This is crap. The EPA in the US has been trying to prosecute frackers for years for pollution and has failed. And there is peer reviewed papers showing fracking does not contaminate.

In Australia a leading alarmist professor Garry Willgoose, with whom I had some stoushes some time ago at Newcastle University when I brought David Stockwell and Miklos Zagoni out for talks, has published a useful analysis of fracking in both coal and shale deposits where legitimate issues about fracking are raised.

It’s a pity Paull could not be as measured.

In fact the real issues with fracking are to do with governmental right of entry onto properties and fair and just compensation for landowners when government policies remove the effective use of their property.

This last issue is what destroyed Spencer and many other farmers. Australia’s involvement with Kyoto and other international agreements has seen many farmers dispossessed from their properties so Australian governments can claim they have met their international obligations for CO2 sequestration; which basically means locking up farm land and preventing viable productive farming from occurring.

So despite there being concerns about company right of entry onto private land to explore for coal and gas the greater acts of dispossession of farmers are caused by green ideology and the great lie of AGW with all its diverse and oppressive policies.

This noble cause of protecting our farming heritage is beneath the likes of Paull though who sits in his comfortable urban home enjoying the lifestyle produced by farmers and others who extract our wealth from nature. Paull like Bandt and the other greens is more concerned with nature than humans and seek to use their power to prevent nature from being disturbed by the likes of farmers like Spencer. That their useless lifestyle is dependent on farmers like Spencer being able to farm and on the cheap energy produced by gas and coal is ignored or taken for granted by them.

What a hypocrite; what a bastard.
Posted by Geoff on January 22, 2015 No comments:

Despite fears that global warming is harming the Arctic region faster than the rest of the world, Greenland is defying climate scientists and currently growing at its fastest rate in four years.
The Danish Meteorological Institute reports that Greenland’s ice sheet has seen more growth so far this year than in the last four years. Greenland’s growth in 2015 is also higher than the mean growth for 1990 to 2011. (link)

In the above figure, we show the daily surface mass balance (on the left) and you can see where it has snowed and melted (incl. sublimate) on the ice sheet over the last 24 hours. For comparison, the map to the right shows the average value for the same calendar date over the period 1990-2011. This historical average is based on weather from a somewhat different model and the two are therefore not always strictly comparable.
The surface mass balance is calculated over a year from September 1st to August 31st (the end of the melt season). The figure to the right shows the sum of all the daily changes from September 1st up to today. Next year on September 1st the map will be reset and we start over. This accumulated map illustrates how much the surface mass balance has contributed in each point across the ice sheet.
The figure below shows the total daily contribution from all points on the ice sheet (top) and the same accumulated from September 1st to now (bottom). The blue curves show this season’s surface mass balance in gigatons (Gt; 1 Gt is one billion tons and corresponds to 1 cubic kilometer of water), and for comparison the mean curves from the historical model run are shown with two standard deviations on either side. Note that the accumulated curve does not end at 0 at the end of the year. Over the year, it snows more than it melts, but calving of icebergs also adds to the total mass budget of the ice sheet. Satellite observations over the last decade show that the ice sheet is not in balance. The calving loss is greater than the gain from surface mass balance, and Greenland is losing mass at about 200 Gt/yr. 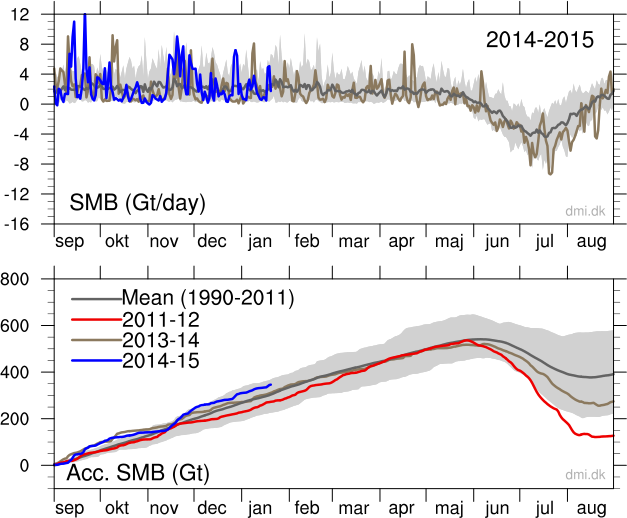 Shrinivas Aundhkar is the director of Mahatma Gandhi Mission, Centre for Astronomy and Space Technology, Nanded, India. He has warned: "The fewer sunspot activities on the Sun witnessed since the last two solar cycles might lead to a "mini ice age-like situation" in coming years."

On Tuesday, he addressed  a lecture: Get Ready for Little Ice Age.

From The Times of India:


Aundhkar, who has worked with scientists across the world on Sun-Earth connection, said, "The Sun undergoes two cycles that are described as maximum and minimum. The activity alternates every 11 years, and the period is termed as one solar cycle. At present, the Sun is undergoing the minimum phase, reducing global temperatures."


"The Sun, our energy source, goes through phases of violent (maximum phase) and quiet (minimum phase) activity every 11 years, which is called one solar cycle. The effects of minimum activity of a solar cycle are seen for about a year. However, it has been revealed that the minimum activity was seen for more than four years in the recently concluded solar cycle. Thus, it was the longest and quietest minimum phase in the past 100 years," the scientist said.

"The Earth may be heading towards a mini-ice age period, which is similar to what was observed in the 17th century. During the time, the sunspots on the Sun were absent. This led to a drop in northern hemisphere temperature by 2-3 degrees. The current scenario is almost same. Such climatic conditions might affect the agricultural pattern and health and trigger disasters in the worst scenario," he added. (link)