A Bomb up the BoM's Bum is needed. (UPDATED)

Before I go too far, a little instruction in Aussie vernacular, in case this gets misconstrued. Bum, to an Australian, is not a hobo.

BoM: the Australian Bureau of Meteorology.

There is an old Australian saying: "It would take a bomb up his bum to make him work." In this day of terrorists and suicide bombers, the saying is no longer politically correct. However, it makes a good title for this piece.


Warwick Hughes runs an excellent blog called Errors in IPCC Science. Today he posted an update to a long-running train with the BoM.

In May 2014 I got a reply from Dr Rob Vertessy, Director of the BoM – to my pointing out that the ACORN-SAT data set had about a thousand examples where a daily MAX was less than the daily MIN. Dr Vertessy said that he expected that these errors would be corrected in an updated version of ACORN-SAT in the second half of 2014.

I just checked ACORN data for Alice Springs back to 1986 and the exact errors discovered by Ed Thurstan in 2013 are still there.

JUST think about it for a moment.... The BoM describe themselves as (link)


The Bureau of Meteorology is Australia's national weather, climate and water agency. Its expertise and services assist Australians in dealing with the harsh realities of their natural environment, including drought, floods, fires, storms, tsunami and tropical cyclones. Through regular forecasts, warnings, monitoring and advice spanning the Australian region and Antarctic territory, the Bureau provides one of the most fundamental and widely used services of government.

How ridiculous does it look for this body to have a thousand examples of daily maximum and minimum temperatures where the minimum was greater than the maximum. And once this was pointed out to them, wouldn't they go red-faced running to correct these glaring errors?

NOPE! They did nothing for at least 8 months. 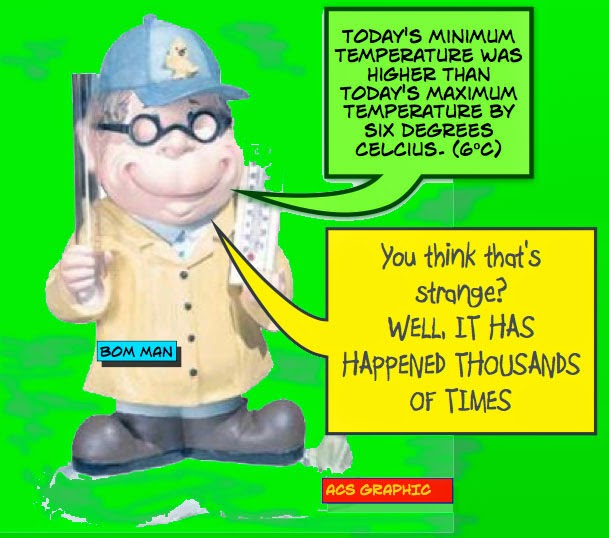 Today, Joanne Nova published a follow-up piece to another long-running saga (See previous -BoM was incompetent..) involving the BoM. Ken Stewart has been pursuing this matter with the BoM.

Again the BoM replied, again not red-faced but with a half hearted explanation.

And let's not forget the massaged data that was exposed by Dr. Jennifer Marohasy:

We pay the BoM a fortune. They get forecasts wrong. For Example: last Sunday the week's forecast for this blogger's area was rain every day except Wednesday. They were correct for Wednesday and Friday.

Everyday was dry except Friday. Two correct out of seven.

This week they forecast rain every day except Saturday and Sunday. SO far they have been wrong every day.


As shown above, the BoM describe themselves as "Australia's Climate Body." In partnership with the CSIRO that produced a report titled: State of the Climate.


Air and ocean temperatures across Australia are now, on average, almost a degree Celsius warmer than they were in 1910, with most of the warming occurring since 1950. This warming has seen Australia experiencing more warm weather and extreme heat, and fewer cool extremes.

There has been NO GLOBAL WARMING for 18 years; this is commonly called the "pause" in global warming. If a train pulled into a station for a few minutes, that would be called a pause in the train's journey. If the train stayed at that station for 18 years, would it still be a pause? Or would it be a full stop?

Hardly before the ink was dry, the BoM issued another bomb: (link "our" ABC)


The Bureau of Meteorology (BoM) has withdrawn its advice Alice Springs recorded its hottest day on Tuesday, blaming a faulty thermometer for an incorrect temperature reading.
The ABC was told on Tuesday night the temperature at Alice Springs airport reached 46 degrees Celsius at 3:21pm (ACST).
Media player: "Space" to play, "M" to mute, "left" and "right" to seek.
The standing record of 45.2C had been set on January 3 in 1960.
But about midday today, the BoM said an instrument error was to blame for the record high reading.
"We have some mercury and glass thermometers that did not show that spike to 46C.
"They showed the maximum temperature yesterday to be only 41.5C." 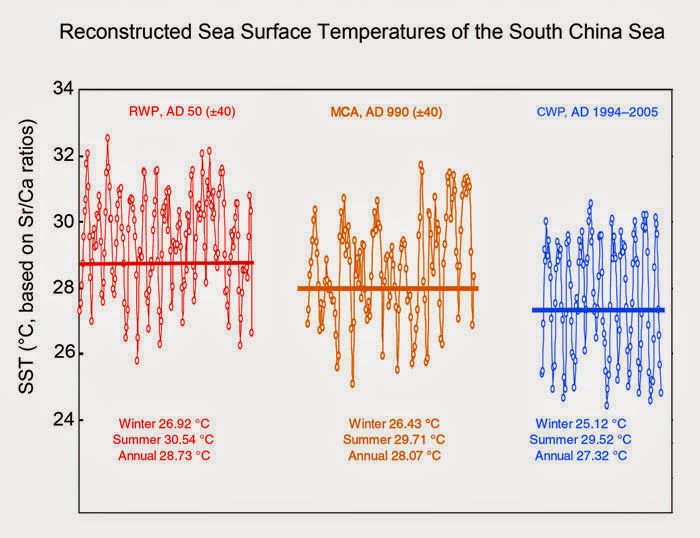 In the Abstract, the authors say:

The large scale syntheses of global mean temperature in the IPCC fourth report suggest that the Northern Hemisphere temperature in the second half of the 20th century was likely the highest in at least the past 1300 years and the 1990s was likely the warmest decade. However, this remains debated and the controversy is centered on whether temperatures during the recent half century were higher than those during the Medieval Climate Anomaly (MCA, AD 800-1300) and the Roman warm period (RWP, BC 20-A.D. 400) the most recent two natural warm periods of the late Holocene. Here the high resolution sea surface temperatures (SSTs) of two time windows around AD 900 (±40) and AD 50 (±40) which located in the MCA and RW P respectively.


Last of all, the Chinese group of five write that a "recent study in Qaidam Basin of northwest China also indicated a warmer MCA," noting that "quantitative reconstructions from Sugan Lake and Gahai Lake both suggested a much higher temperature in the MCA than in the recent warm period," citing He et al. (2013). And, we might add, the second NIPCC report of 2013 also provides a wealth of data that contradict the claim of the IPCC that "recent decades were the warmest in at least the past 1,300 years," clearly demonstrating that there has been nothing unusual or unprecedented about the mean level of global warmth experienced over the past 18 years of no significant upward or downward trend. 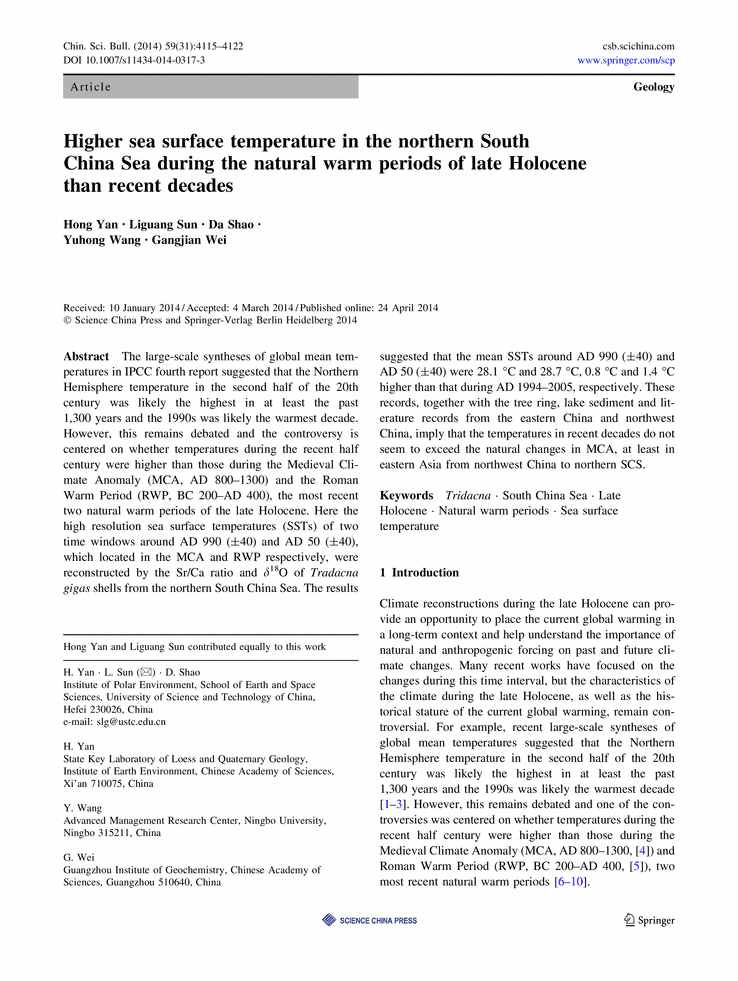 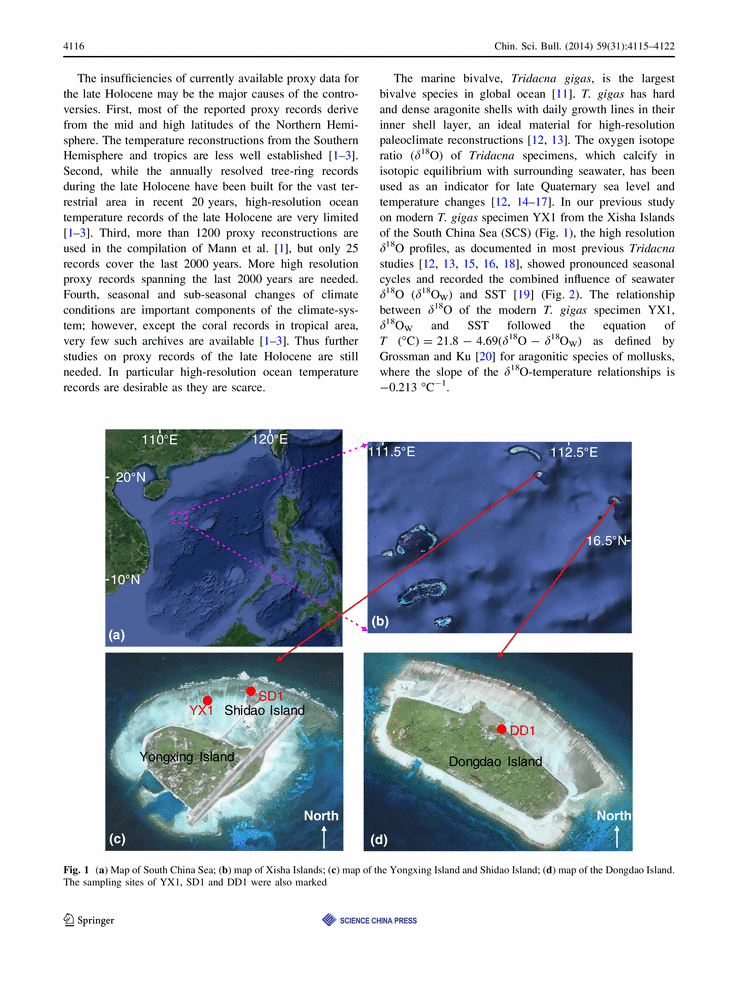