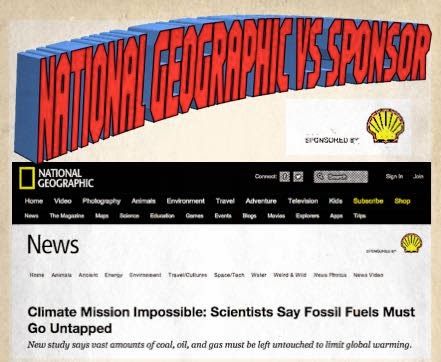 National Geographic is sponsored by BigOil!

Canada's tar sands need to stay in the ground, the oil beneath the Arctic has to remain under the sea, and most of the world's coal must be left untouched in order to prevent global temperatures from rising more than 2°C

Perhaps BigOil (Shell) will melt down.
Posted by Geoff on January 09, 2015 No comments:

We have heard many times of retiring Scientists who suddenly feel free to say that the AGW theory is a hoax.

The College Fix, a blog from George Washington University, reports the latest escapee from the funding fraud.

Dr. Terry Hughes, a glaciologist and recently retired professor, says the real issue is that the topic is being used as a political pawn to siphon money and votes.


Dr Hughes, in an interview with The College Fix, said researchers want to keep federal funding for climate change alive, and politicians want to earn environmentalist votes, and both predict global pandemonium to that end.

Hughes, a professor emeritus of earth sciences and climate change at the University of Maine, said for years his colleagues urged him to be in lockstep with former Vice President Al Gore – “the drum major in the parade denouncing global warming as an unmitigated disaster,” he told The College Fix.

Colleagues urged him to be in lockstep with Al Gore?

Why would any scientist want to be associated with Al Gore? Al Gore, whose award winning documentary An Inconvenient bunch of lies....er....Truth(?) was so full of errors that the British High Court judge ruled that it contained at least nine key scientific errors and that those errors had arisen "in the context of alarmism and exaggeration."

The nine errors identified in An Inconvenient Truth by Justice Burton consisted of erroneous or exaggerated statements about sea-level rise, evacuation of Pacific Islands, intensity of ocean current circulation, cause/effect relationship between increasing carbon dioxide and increasing temperature, melting glaciers on Mt. Kilimanjaro, the drying up of Lake Chad, and matters relating to Hurricane Katrina, polar bears and coral reefs. This comprises a list of most of the pin-up environmental scares that are used worldwide by proponents of dangerous anthropogenic global warming in support of their cause. (Taxing Air P47 - Bob Carter) 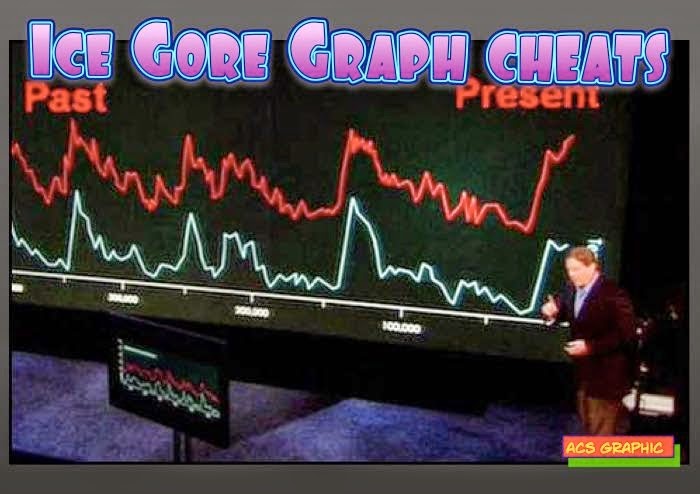 Any truthful scientist would know that Al Gore cheated when presenting the Ice Gore ...er...Core Data.

If you want to compare graphs you overlay one over the other; if you want to hide the fact that temperature rise PRECEDES rise in atmospheric CO2,  you separate the  graphs.


It is interesting to note that the IPCC scientific report (e.g., the AR4) avoids this question of lag. Instead of pointing it out, they write that in some cases (e.g., when comparing Antarctic CO2 to temperature data) it is hard to say anything definitive since the data sets come from different cores. This is of course chaff to cover the fact that when CO2 and temperature are measured with the same cores, or when carefully comparing different cores, a lag of typically several hundred years is found to be present, if the quality and resolution permit. Such an example is found in the figure below.

With all this empirical science, why would a real "climate scientist" prostitute science by being "in lockstep with Al Gore?"

But Hughes – who believes global warming is actually a good thing because more carbon dioxide is good for the environment in many ways – said he does not want to march to that beat.

“Too many (the majority) of climate research scientists are quite willing to prostitute their science by giving these politicians what they want,” he said.  What he wants people to understand is that climate change researchers and politicians collude to create fear of a disaster that will never happen.

“You will never read or hear any of this from the scientific and political establishments,” he said. “I’m now retired, so I have no scientific career to protect by spreading lies.

The fraud pushers; these "scientists in lock-step" with the cheating Al Gore deny empirical evidence yet they call us deniers.