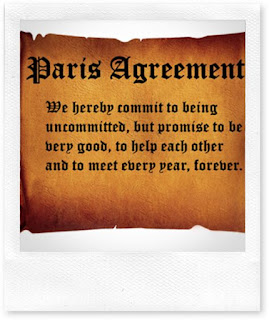 ICSC Executive Director Tom Harris has written a piece published in PJ Media with above title.

The Delegates put on a great act celebrating the agreement, and that was reported by the MSM, eg

Tom Harris likens their delusion (was it delusions, or was it false celebration?) to Peter Pan in Neverland:

There, with the help of fairy dust, Peter Pan can fly, and he teaches others to overcome their common sense and soar as well. Peter claims greatness, is able to feel danger when it is near, and even has the ability to imagine things into existence. In fact, there is almost nothing the hero of Neverland cannot do -- yet in order to maintain such powers, Peter must stay childlike and forget everything he learns about what happens in the real world.


The script for much of this year’s UN COP21 climate conference, held in Paris during the first two weeks of December, could have come directly out of Barrie’s book. The UN believes they can sense climate danger decades in advance, a power that requires forgetting that every prior prediction they made turned out to be wrong. They imagine that today’s global climate models (GCM), simulations that utterly failed to forecast the current 18-year “pause” in global warming, provide lawmakers with the “unequivocal” knowledge they need to enact trillion-dollar policies to limit planetary temperature rise to two degrees Celsius.

To back up such extraordinary claims, they tell us that there is an “overwhelming consensus” of scientists who agree with their position. This statement requires that they imagine thousands of well-qualified skeptic scientists out of existence, or imagining that they constitute a tiny minority that isn’t worth their time.

Oh! NO! Not the false 97% consensus. Put 97% consensus into the search function of this blog and you will be amazed that the Shrill still rely on any of those flawed papers purporting to support this scurrilous series of science fiction papers published in peer review journals.

Then Tom writes of the counter meeting held by the scientists not dependant on government funding.


“A Day of Examining the Data”

The Nongovernmental International Panel on Climate Change (NIPCC) released a report titled “Why Scientists Disagree About Global Warming.” The report was authored by climatologist Dr. Craig Idso of the Center for the Study of Carbon Dioxide and Global Change in Arizona, geologist Dr. Robert Carter, former Head of the Department of Earth Sciences at James Cook University in Australia, and physicist Dr. S. Fred Singer, Emeritus Professor of Environmental Sciences at the University of Virginia and NIPCC founder.

The report refutes most of the UN proclamations. For example, the NIPCC report states: