Politicians, Scientists use ambiguous, non scientific, non-evidence based, terminology. ALP may have a fraudulent ideology. 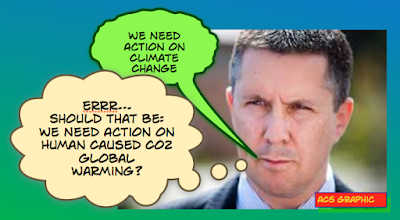 We recently had the pleasure of hearing you speak at the Canberra Community Forum. The title for the Forum was “We Need Action on Climate Change”.  In the interests of scientific integrity, honesty and transparency we will call it “Human Caused CO2 Global Warming” (HCCO2GW) in this public letter.

The reason we feel we can do this is because you conceded that it should be described as such during the evening. In our opinion, the term “climate change” is ambiguous, misleading and based on political ideology rather than any scientific evidence or hypothesis.

Thank you for allowing us the opportunity to ask you two questions. I will now address my question. Retired Geologist, Aert Driessen, has written to you separately regarding his question.

Suffice to say here, I informed you of the fact that at the previous Canberra Community Forum in
2013 both Professors Will Steffen and Leslie Hughes agreed to go to jail if it turned out they had knowingly misled the Australian politicians and the Australian people. I then requested that if this statement turned out to be true, and if you were Minister for the Environment would you hold those professors accountable.

I expected a straight–forward response along the lines of an unqualified “Yes, absolutely. However, your reply was very disappointing and did not adequately address my request at all. You totally ignored the word “knowingly”, yet it is clearly there on the audio.   https://www.youtube.com/watch?v=0vswhzGVlSc (ED: see below)

It is for the listener to determine if your other ambiguous statements regarding the ideology of the entire, tiny discipline of Climate Science is any assurance of scientific integrity at all.

Our public letters to Professors Steffen and Hughes following the 2013 forum provided robust evidence to support the null hypothesis. They also provided the professors with Black’s legal definition of fraud. Neither professor responded to our letters. Those letters can be seen here http://www.principia-scientific.org/two-alarmist-professors-called-out-for-alleged-climate-fraud.html  and here http://www.principia-scientific.org/open-letter-on-question-of-australian-climate-science-fraud.html

Yet, recently we heard Professor Will Steffen yet again in public using ambiguous, non scientific, non-evidence based, terminology. The term “extreme weather events” appears to be his latest misleading catch phrase.

This ongoing non scientific conduct, by Professor Steffen particularly, is now a very serious matter as it could be that it fits Black’s definition below.

Fraud is “a false representation of a matter of fact, whether by words or by conduct, by false or misleading allegations, or by concealment of that which should have been disclosed, which deceives and is intended to deceive another so that he shall act upon it to his legal injury.” http://www.climate.conscious.com.au/docs/new/1d_appendix.pdf

The Australian citizens have suffered legal injury as a result of the maladroit policies arising from the ‘science’ of ‘climate change’. However, under Australia’s democracy, while it still exists, no one is above the law.  Judges, politicians, scientists, academics, senior public servants, and CEOs can be tried for fraud, or failure in their fiduciary duty.

The evidence now indicates that the Australian Labor Party may have a fraudulent ideology. For this reason it is important that you read and respond to the evidence provided below, and please excuse the tedious, but necessary repetition.

The null hypothesis for both the pseudo-scientific term “Climate Change” and HCCO2GW scientific hypothesis is the same “Our climate is changing pretty much as it always has since long before and since the arrival of humankind on planet Earth”.

We now publicly provide you with the evidence that supports the null hypothesis as opposed to the alternative hypothesis .  Please take note that science is an honourable discipline based on Karl Popper’s method of empirical falsification.

The first few bullet points are links to the evidence for the null hypothesis versus HCCO2GW. They are just a few references out of many, many thousands.

The next few bullet points provide the evidence that indicates that from as early as 1998 there was no overwhelming scientific consensus supporting HCCO2GW.

There are only a few studies that claim to have measured overwhelming scientific consensus for HCCO2GW. They are all seriously methodologically flawed. The two main earlier ones are:-

The next few bullet points refer to evidence that indicates that HCCO2GW is the current politically driven pseudo-scientific scam.

In the interests of openness, honesty and transparency we inform you that this letter has been emailed to close to 1700 recipients. We reiterate  that we are simply two retired scientists expressing our opinion formed on the basis of our own independent research. If there is anything that we have stated in this letter that you think is untrue please click ‘Reply All’ and let us know and we will apologise. But, please do not turn a blind eye to the evidence  above. Please, do not keep yourself wilfully ignorant any longer.