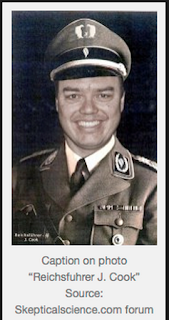 Skeptical Science (SS) is a disinformation site which more correctly should be labelled UNSkeptical UNScience.

It is run by a cartoonist John Cook who likes to dress in SS costume. The image above was on the SS site but has since been removed. One of his cartoons here (link)

And Popular Science's "The Truth about Skeptical Science" tells us:


A link from the Skeptical Science "About" page originally went to his cartoonist page,"John Cook: A cartoonist working from home in Brisbane, Australia"

A cartoonist working from home in Brisbane, Australia, John is currently juggling the tasks of taking care of his daughter Gaby, drawing new Sev Space cartoons, casino online,continually developing and programming the Sev Wide Web, developing a new cartoon series Terrible Twos, posting regular updates in his cricket blog as well as obsession about past and future Ashes series, dabbling in screenwriting, programming for PaperWeb Design and consequently getting nothing done!

Previous about on SS: (link)

This site was created by John Cook. I'm not a climatologist or a scientist but a self employed cartoonist and web programmer by trade. I did a Physics degree at the University of Queensland and while I achieved First Class Honours and could've continued onto a PhD, I instead quit academia and became a professional scrawler. Too much doodling in lectures, I think. Nevertheless, I've pursued a keen interest in science and if anything, found my curiosity about how the world works increased once I wasn't forced to study for impending exams.

An example of Cook's Work was:


We analyze the evolution of the scientific consensus on anthropogenic global warming (AGW) in the peer-reviewed scientific literature, .......... Among abstracts expressing a position on AGW, 97.1% endorsed the consensus position that humans are causing global warming.

However a paper by Legates et al found: (link)


inspection of a claim by Cook et al. (Environ Res Lett 8:024024, 2013) of 97.1 % consensus, heavily relied upon by Bedford and Cook, shows just 0.3 % endorsement of the standard definition of consensus: that most warming since 1950 is anthropogenic.

And yet Reichsführer Cook is the man that the University of Queensland put in charge of a course that "uncovers why the topic of climate change is so controversial, exploding a number of climate myths along the way."

ON UNSkeptical UNScience, Cook et al have a page titled

This is a scrappy crappy page and all the "Myths" are easily debunked.

"Climate's changed before" Climate reacts to whatever forces it to change at the time; humans are now the dominant forcing.

This SS "myth's" answer has been debunked Here - 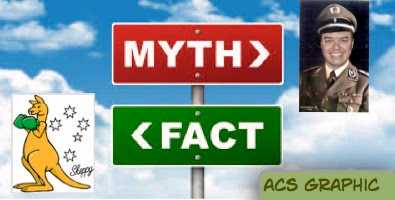 Friends of Science site has debunked a whole range of other "Myths" on their page headed:
C
COMMON MISCONCEPTIONS ABOUT GLOBAL WARMING