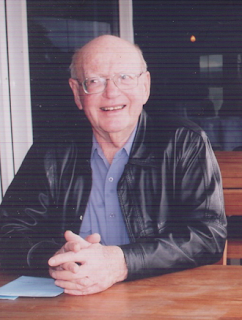 I met John about 10 years ago. We shared a common scepticism of man-made global warming. John came from a solid science background. One of his 2 degrees was a BSc and he was a qualified metallurgist.

They don’t make metallurgists anymore and if John was typical when they did make them they made them well. One of his articles on the myth of clean coal was published at On Line Opinion. It’s excellent and I referred to it often.

After a distinguished career at BHP’s steel wire plant he continued his extensive network which included being affiliated with the Institution of Engineers Australia (MIEAust, CPEng) and the Institute of Materials Engineering Australasia (IMEA). He was very active on 14 technical committees of Standards Australia for 20 years, representing both BHP and IMEA, positions he relinquished only in early 2008.

He was a good man to have your back and when I didn’t seek his advice I usually regretted it.

After we struck up our friendship we had many adventures together at numerous talks, presentations and meetings. We met the famous and infamous and had a few narrow escapes. Such as the time I received an invitation to an energy meeting at Lake Macquarie City Council. LMCC was well known as a firm supporter of global warming and I thought I had better have back-up. John readily agreed.
The meeting was as we feared and we took a dressing down before escaping like two school-boys leaving the Principal’s office unscathed.

On another occasion John came with me to a talk I was giving at Singleton. I started well and was critiquing the Intergovernmental Panel for Climate Change (IPCC) and its most recent report, AR4 which came out in 2007. The IPCC had published three previous reports, FAR in 1990, SAR in 1995 and TAR in 2000.

I had not sought advice from John before the talk and had somehow thought that AR4, stood for Annual Report 2007. On this basis I was making fun of the IPCC and its inability to count with only four annual reports being published in 17 years.

During the talk I looked down to see John with his head in his hands. In retrospect it was at this moment I lost the audience.

It was me who could not count not the IPCC.

John had an extensive list of email acquaintances and always sent out regular and interesting material. He remained active in PROBUS and whenever I rang him was his cheerful and thoughtful self.

He maintained his enthusiasm and interest in the science of global warming during his final illness.
John leaves his wife and 2 daughters, Cecily, Suzanne and Lyndal and grandchildren about whom he was very proud.

John was old school, a decent man and I’ll miss him.