Since 1990 Satellites show World not warming as much as the models say. 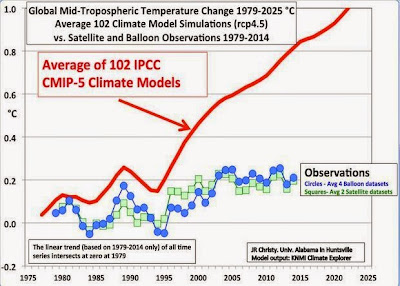 The scientists at the University of Alabama in Huntsville are known throughout the environmental community as being skeptical that climate change (or global warming) will have a catastrophic effect on the earth. The crux of the matter is that their research, using satellite data to measure temperatures in the atmosphere, disagrees with climate models they say that overstates the earth's warming. (link)

What John Christy and Roy Spencer (who then worked for NASA at Marshall Space Flight Center just down the street from UAH) announced at that press conference on March 29, 1990, was that their study of temperature data from satellites indicated the world was not warming as much as was believed.

Christy, director of the Earth System Science Center at the University of Alabama in Huntsville appeared before the US Congress Committee of Natural Resources.

It was virtually the silver anniversary of Roy Spencer's career-defining moment. John Christy said he had no idea that a discovery announced in 1990 would not only still resonate 25 years later but would be at the center of a raging debate.

The date was March 29, 1990. That was the day - though unbeknownst to either Christy or Spencer - they publicly became climate change skeptics.

"We had no clue at that time, 25 years ago, we would be in the center of a huge controversy almost 25 years to the day with congressional investigations, the secretary of state, the vice president telling us we don't even believe in gravity. Who would have thought that 25 years ago?"

"I think we knew it was going to be an important new way of monitoring the climate. But you just never know if something like that is going to have legs scientifically. Whether somebody will come up with a new way of doing it better in two years.

Looking back, I'm kind of surprised this is still the leading way of doing this. Really our only competitors in the field have the same answer we do, very close to the same answer." (link)

AL.com: President Obama recently said that Republicans are going to have to change their opinions on the dangers of climate change. Is this a partisan issue?

Christy: Numbers are numbers. That's what we produced. Those aren't Republican numbers or Democratic numbers. Those are numbers. Those are observations from real satellites. Roy and I were the pioneers. We discovered how to do this with satellites before anyone else did. You can see this very strongly in the administration. Secretary of State John Kerry comes out and says it's like denying gravity. The attack on skeptics was ramped up in the past month.

As this blog has noted before, the Shrill Alarmists are getting shriller.

AL.com: How do you respond to the perception that 97 percent of scientists agree on climate change? (The Wall Street Journal in 2013 reported on the "myth"of the 97 percent).

Christy: The impression people make with that statement is that 97 percent of scientists agree with my view of climate change, which typically is one of catastrophic change. So if a Senate hearing or the president or vice president says 97 percent of the scientists agree with me, that's not true. The American Meteorological Society did their survey and they specifically asked the question, Is man the dominate controller of climate over the last 50 years? Only 52 percent said yes. That is not a consensus at all in science.

AL.com: What about the value of renewable energy sources?

Christy: I am for any energy source that is affordable and doesn't destroy the environment. If carbon dioxide was a poisonous gas, I'd be against it. Carbon dioxide makes things grow. The world used to have five times as much carbon dioxide as it does now. Plants love this stuff. It creates more food. CO2 is not the problem.

AL.com: Why is your research using satellite data a more effective way of measuring climate change than surface temperature? After all, humans live on the surface, not in the upper atmosphere.

Christy: Carbon dioxide is a greenhouse gas. When you put more of it in the atmosphere, the radiation budget will respond appropriately. It's just that what we found with the real data is that the way the earth responds is to shed a lot of that heat, not keep it in, which climate models do. So I'd rather base policy on observations than on climate models.