Dan Zegert describes himself on his own homepage:


Dan Zegart is a veteran writer with a comprehensive range of non-fiction experience, from investigative journalism to first-person memoir.

He has written a piece for The Nation. They describe him as "a freelance investigative journalist."

Environmental groups have warned directors of fossil fuel companies that they may be held personally liable for misleading the public about climate change.


three major international environmental organizations warned the corporate executives of some of the largest fossil fuel companies that they could be personally liable for damages for funding climate change denialists and working against efforts to slow climate change.

Mr Zegart and the three NGOs - Greenpeace, the World Wildlife Fund and the Center for International Environmental Law, - would surely need to have firm grounds to prove that GHG emissions of the fossil fuel companies were actually causing damage.

That could, in fact should, be a major stumbling block in any litigation.

The role of the IPCC: (source)


Today the IPCC's role is as defined inPrinciples Governing IPCC Work, "...to assess on a comprehensive, objective, open and transparent basis the scientific, technical and socio-economic information relevant to understanding the scientific basis of risk of human-induced climate change, its potential impacts and options for adaptation and mitigation. (bold added)

The IPCC's mission is a narrow view of science: studying only "human-induced climate change" and, although water vapour is the major greenhouse gas, the alarmists say (source) "Carbon dioxide is the primary greenhouse gas that is contributing to recent climate change." 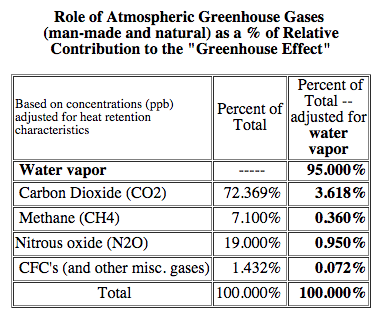 Just how much of the "Greenhouse Effect" is caused by human activity?
It is about 0.28%, if water vapor is taken into account-- about 5.53%, if not. 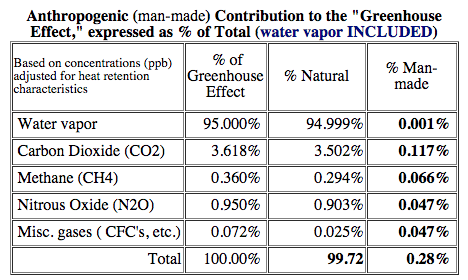 Back to Mr Zegart and the intention to sue fossil fuel companies: Consider that man's contributions to the "Greenhouse Effect" is just over one quarter of one per cent, surely Mr Zegart and his three NGOs might like to read the "climate science" report that covers all "science" and not just the human induced science of the IPCC.

Mr Zegart, to round off your education, please take time to read the NIPCC reports that cover all "science", starting HERE - Climate Change Reconsidered.

Incidentally, although Dan Zegart did not reveal this, he is one of the Alarmists' advocates.

The Climate Investigations Center (CIC) was established in 2014 to monitor the individuals, corporations, trade associations, political organizations and front groups who work to delay the implementation of sound energy and environmental policies that are necessary in the face of ongoing climate crisis. (bold added)

[ Ed: No global warming for over 18 years. What Climate Crisis? In fact, the alarmists will ramp up the alarm until the UNFCCC COP21 Paris to again try for the UN run world government.]