Lord Monckton and the push to get rid of PM Abbott

The following Youtube was recorded during Lord Monckton's visit to Australia in September-October 2014.

An extract from Lord Monckton's presentation:

David King was asked whether all the nations of the world were now, in principle, ready to sign their people’s rights away in such a treaty. Yes, but there are two standouts. One is Canada. But don’t worry about Canada. They’ve got an election in the Spring of 2015 and we and the UN will make sure the present government is removed. He was quite blunt about it.

The other hold out is Australia. And Australia we can’t do anything about because Tony Abbott is in office until after the December 2015 conference. So that means you all have to guard Tony Abbott’s back. Because the Turnbull faction, in conjunction with the UN,  will be doing their absolute level best to remove your elected Prime Minister from office before the end of his term and , in particular, before the end of 2015, so that they can get 100% wall-to-wall Marxist agreement. They do not want any stand-outs. And the most likely stand-out at the moment is Australia. So look after him.

Lord Monckton also said that we should push for the UN to include a get-out clause.
This treaty position was written into the original Kyoto protocol 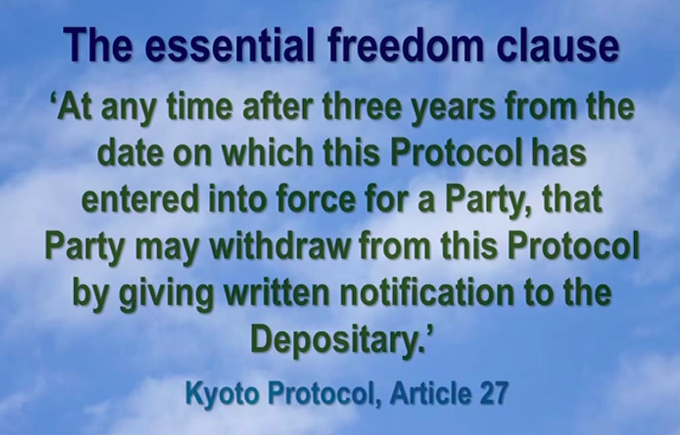 "If we were not to have such a position in the World Government treaty they are trying to put in place in 2015 in Paris then that could be then end of Freedom and Democracy. It is that serious."

THE ABC is trying to destroy Tony Abbott. Its bias — actually unlawful — has never been so ruthless.
Even the ABC’s hand-picked reviewer had to admit this week that the ABC’s coverage of the Abbott Government’s first Budget was marred by anti-Liberal bias — and she hadn’t even looked hard.
Colleen Ryan, a former Fairfax editor, had been asked by the ABC to check its reporting of the Budget in the week after it was delivered.
This Budget was the country’s first and best hope of reining in Labor’s massive deficits.
If it wasn’t a make-or-break moment for the country, it sure was for Prime Minister Tony Abbott.
And he got smashed, especially by the ABC, our biggest media organisation, with four TV stations, five radio stations, an online newspaper and a publishing house.