Posted by Geoff on February 26, 2015
Another Issue of "Carbon Sense” prepared for The Carbon Sense Coalition by Viv Forbes and volunteer helpers. 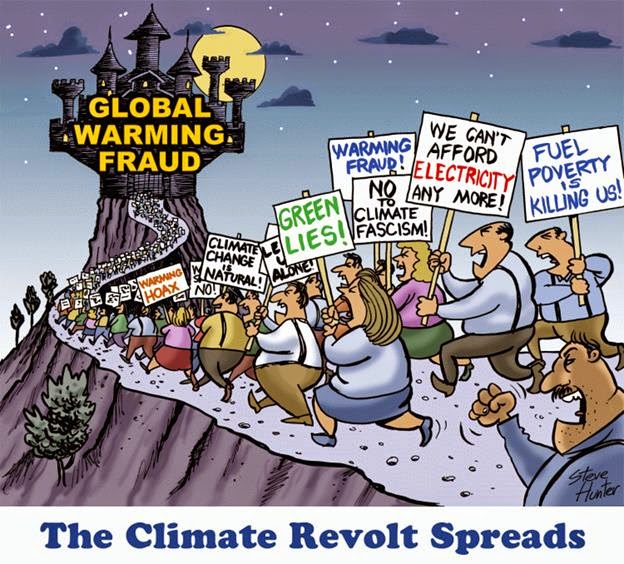 Strange Allies in the War on Carbon Fuels.


What great cause could unite Prince Charles, President Obama, the Pope, the Arab Oil sheiks, the United Nations, the European Union, the Russians, the Chinese, Pacific Island Nations, most undeveloped countries, the glitterati of Hollywood, left-wing politicians, unrepentant reds, government media, the climate research industry, Big Oil, Big Gas and the Green Blob. It must be something posing a clear and urgent danger to all humanity?

No, the crusade that unites them all is the War on Carbon Fuels, focussed mainly on that most vilified target, coal.

The biggest group, and the generals in this war on carbon, have no real interest in the facts or science of global climate change – they see climate alarmism as a great opportunity to achieve their goal of creating an unelected global government. They have even laid out their plans in a document called Agenda 21.

This group naturally includes the United Nations and all of its subsidiaries, the EU, and left wing politicians and media everywhere. At a news conference in Brussels recently, Christiana Figueres, executive secretary of U.N.'s Framework Convention on Climate Change, admitted that the goal of environmental activists is not to save the world from ecological calamity, but “to change the economic development model” i.e. destroy what is left of free enterprise and private property. See:
http://news.investors.com/ibd-editorials/021015-738779-climate-change-scare-tool-to-destroy-capitalism.htm

The next big group of carbon warriors is the anti-western failed states who see this as their big chance to enrich and entrench their ruling classes with “climate reparations”.

Then there are the enviro-entrepreneurs forever seeking new crusades to energise their supporters and get the donations rolling in – Greenpeace, WWF, Get Up etc...

In the dark corner are the anti-human Malthusians and the Deep Greens who want to get rid of most of us other people – personified by the rich and powerful such as Prince Charles and Maurice Strong. They know that carbon fuels support millions of people by cultivating, harvesting, transporting, processing and storing most of the food that supports the cities of the world. Killing the use of carbon fuels will certainly achieve their goal of reduced world population. See:
http://explosivereports.com/2013/01/12/prince-charles-openly-endorses-draconian-conclusions-of-new-population-study/

Naturally, government media usually supports a bigger role for government, and all media likes a scare story. Truth or logic does not matter greatly for most of them – just so long as they can coax a looming disaster story from someone. The daily diet of natural calamities soon heightens climate anxiety, which then motivates politicians to be seen to be “doing something”.

And then there are those who see that fighting carbon fuels also suits their pockets. As someone said “When placing a bet, the best horse to back is the one called ‘Self-interest’ – at least you know he is trying”.

For example, Shell, with its massive gas interests, was caught campaigning against coal fired power, the main competitor of gas in electricity generation. See:
http://www.theaustralian.com.au/innovationchallenge/shell-admits-campaigning-against-coal-fired-power-plants/story-fn9dkrp5-1226770855004

The Chinese of course are great supporters of green energy as long as it is installed elsewhere - eg they supply the machines and solar panels and then welcome the factories forced from the host country by soaring electricity prices.

Gas, nuclear and hydro power will be the greatest long term beneficiaries of the war on coal. Initially they will be needed to provide base load and back up for intermittent green power like wind and solar. Then as green subsidies are withdrawn to appease angry tax payers, the green play-toys will fail and grown-up generators will step easily into full time electricity production.

Finally, the government bureaucracy and the research grants industry justify their existence by “solving community crises”. They love “The Climate Crisis” because it can be blamed for any weather event anytime, anywhere. It is unlikely to be solved, no matter how many dollars are thrown at it - a problem that does not exist can never be “solved”. And the sinister “Greenhouse Effect”, like any good ghost, is invisible, mysterious in operation, debatable, and allows anyone to produce their own scare story.

Opposing this coalition of climate alarmists and opportunists is a rag-tag army of stressed tax payers and electricity consumers and a scattering of sceptical scientists and media researchers.

But the imposing alarmist empire has a hollow heart - the globe has refused to warm, the alarmist “science” is crumbling, their climate models are discredited, some researchers have been caught manipulating records and results, and the costs of green electricity are becoming obvious and onerous. The public is growing restive, governments can no longer afford the climate industry cuckoo in the public nest and the ranks of sceptics grow. Groups like UKIP in UK and the Tea Party in US have abandoned the war on carbon.

The climate revolt is spreading.

Disclosure: Viv Forbes is a shareholder and non-executive director of a small Australian coal exploration company. His views are not shared or supported by most Big Coal CEO’s.

To see or join a discussion on the above essay see:
http://wattsupwiththat.com/2015/02/17/strange-allies-in-the-war-on-carbon-fuels/