Climate Predictions from the Dunces Corner 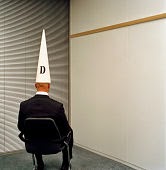 Anyone can be a prophet of doom: Pick a spot on the globe, any spot, and state with oracular authority that it will suffer most from runaway climate change. Tim Flannery fancied Perth, for example, which has yet to become his predicted ghost town, but he has plenty of company in the dunce's corner.

Tony writes that public concern for the supposed catastrophic warming of the planet has been falling for years. He notes that " even on the CSIRO’s figures, Aussies rank climate fourteenth out of sixteen concerns overall, and we rate it only seventh out of eight even among environmental concerns."


Partly to blame is that dratted 18-year halt to global warming, even as man-made CO2 continues to pour into the skies. But my theory is that the global warming industry has made itself so ridiculous over the past 30 years, so hyperventilatingly ludicrous, by predicting ever-more-dire catastrophes by the year 20XX.  But then year 20XX   comes and goes and life continues as normal.


The Claim: 50 million climate refugees will be produced by climate change by the year 2010. Especially hard hit will be river delta areas, and low lying islands in the Caribbean and Pacific. The UN 62nd General assembly in July 2008 said:  …it had been estimated that there would be between 50 million and 200 million environmental migrants by 2010.The Test: Did population go down in these areas during that period, indicating climate refugees were on the move? The answer, no.

Tony then moves on to Flim Flam Flannery's

Tim Flannery is sticking by his warning that Perth could become the first ghost metropolis of the 21st century.

James Patterson points out that the Flim Flam man also predicted that Sydney would run out of water by 2006. FAIL!

In 2004 he predicted that ‘Perth will be the 21st century's first ghost metropolis.' The following year, he said that Sydney could run out of water in as little as two years.
Undaunted by that botched prediction, he tried again in 2007, saying Adelaide, Sydney and Brisbane would ‘need desalinated water urgently, possibly in as little as 18 months.'

As well as running out of water, Flannery (and James Hansen) also said that oceans would rise 25 metres: (link)

James Hansen........ predicts that we have just a decade to avert a 25-metre rise of the sea. Picture an eight-storey building by a beach, then imagine waves lapping its roof. That's what a 25-metre rise in sea level looks like. (The Age: Oct 2006)

There are more than a hundred failed "climate" predictions listed at WUWT - here.

Why hasn't the MSM examined some of these as sceptical journalists instead of getting into bed with the failed alarmists. MSM - FAIL!

Back to Tony Thomas and the Quadrant article:

But a new blog entrant is specialising in the genre and, by sorting and classifying, turns the scare-a-minute soothsaying into spectacular entertainment.

This new  blog "Climate Change Predictions" is specialising in (laughing at) "climate" predictions.

Take this one page:

To see that August "Climate Scientists" and bodies who made these conflicting statements go to hardest hit.

But that’s an article for another day.

There has been a "pause" in the Global Warming. Many have tried to explain why, although CO2 keeps increasing in the atmosphere, there has been NO global warming for more than 18 years. One of the explanations is by warmist (and false science emitter [said warming was 03ºC when it was a mere 0.03ºC]) Dr Karl: (link) Global Warming: Oceans hide the heat.

That's one reason, Dr Karl. Scientists have been stuttering and spluttering and so far have come up with at least 66 (sometimes conflicting) excuses for the lack of warming.

From the so-called "climate scientist."

When the cruel hoax on humanity is finally exposed, these people will be left without their government grants and out looking for employment. Who would want to employ a scientist who had been involved in promoting a despicable hoax that wasted billions, billions that could have been used for the benefit of humanity?