TIME to admit the Pause in Warming.

Down to Earth,  NASA says (link)


Some scientists define climate as the average weather for a particular region and time period, usually taken over 30-years.

The scientific community would come down on me in no uncertain terms if I said the world had cooled from 1998. OK it has but it is only 7 years of data and it isn’t statistically significant. –Phil Jones, University of East Anglia 5 July 2005

Bottom line: the ‘no upward trend’ has to continue for a total of 15 years before we get worried. -Phil Jones, University of East Anglia 7 May 2009

Gee, Mr Jones, (Un)Skeptical (Un)Science's trend calculator, using the RSS satellite data shows that this century temperature is trending down at the rate of 0.05ºC/decade for at least 16 years.

The Earth’s temperature has “plateaued” and there has been no global warming for at least the last 18 years.

Patrick Michaels, Director of the Cato Institute’s  Centre for the Study of Science agreed.

According to the datasets used last year, October 1st will mark the 18th year of “no significant warming trend in surface average temperature, and even if the current 18-year trend were to end, it would still take nearly 25 years for average global temperature figures to reflect the change"

said Michaels, who has a Ph.D. in ecological climatology and spent three decades as a research professor of environmental sciences at the University of Virginia.
Posted by Geoff on November 08, 2014 No comments: 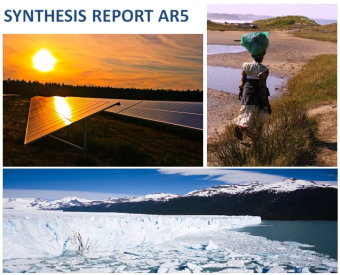 goes by its German acronym, EIKE) has studied the IPCC's SPM and found The SPM includes significant contradictions, simplifications, and even distortions of the science contained in the full reports.

Climate Change Weekly #146
The summary for policymakers released in early November by the United Nations’ Intergovernmental Panel on Climate Change has once again betrayed the science found in the body of the report. In addition, its conclusions and warnings fly squarely in the face of measurable evidence concerning the state of the climate.
The European Institute for Climate and Energy (which goes by its German acronym, EIKE) has done a careful analysis of the IPCC summary for policymakers (SPM) and its synthesis report. These documents purportedly reflect the findings of the IPCC’s three volumes assessing the science, vulnerabilities, and possible responses to climate change.
The SPM includes significant contradictions, simplifications, and even distortions of the science contained in the full reports. In addition, on major points, its conclusions and warnings stand in stark contrast to almost all of the measurements and trends observed in nature.
The EIKE report looks at nine specific claims made in the IPCC’s SPM and synthesis report and finds fault with each one. The claims concern air temperature, sea level rise, ocean temperature, storms, polar ice, extreme weather, crop yields, species extinctions, and man’s responsibility for climate change.
Concerning air temperature and temperature rise, the IPCC’s SPM warns of dramatic temperature rises under business-as-usual scenarios over the next century. The actual range of temperature rise reported in the IPCC’s science reports, however, is as little as 0.3° to a high of 4.8° Celsius, a 16-fold difference, with all values along the scale equally likely. In other words, actual temperature rise is just as likely to be negligible as it is to be dramatic. And all of this ignores a critical real-world observation: Despite a continued rise in CO2 emissions, temperatures have not risen for the past 18 years.
In addition, the SPM claims “the global mean sea level in the 21st Century continues to climb, very likely with a higher speed ... probably in the range of 26 to 82 cm ...” The reality is sea level rise over the past 200 years has not accelerated, and over the past decade the rate of rise has declined.
The IPCC’s SPM hints extreme weather events have become more frequent and intense. Real-world observations disagree: Neither hurricanes, tornados, extreme rainfall events, nor droughts have increased measurably in number or intensity.
The story is the same when it comes to crop failures. While the IPCC’s SPM warns of a decline in staple crops including wheat and corn, each year new records are being set on crop production. Some of IPCC’s own work has shown increased CO2 levels are producing an increase in plant cover and crop growth.
In short, as the German magazine der Spiegel reported, “At the Intergovernmental Panel on Climate Change, Alarmism comes before Accuracy.”
SOURCE: European Institute for Climate and Energy (SDL Translation)
See Also No Tricks Zone