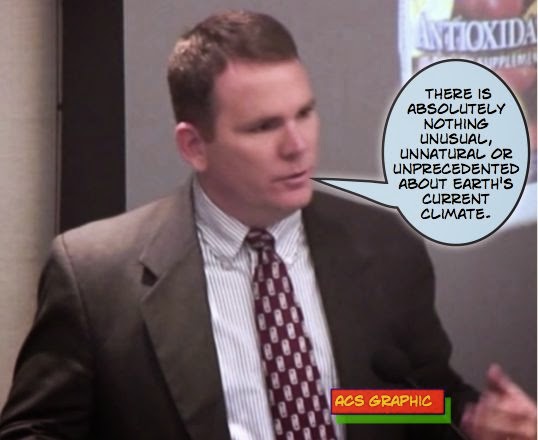 You always hear about the middle ages being a warm time period, but exactly how warm were they?

Listen to guest speaker Craig Idso while he discusses this topic.


"Scientific Studies have shown that temperatures were significantly warmer about a thousand years ago. Carbon dioxide concentrations in the atmosphere did not cause that warming and evidence suggests temperatures of the current warm period have nothing to do with the modern rise in CO2. There is absolutely nothing unusual, unnatural or unprecedented about Earth's current climate."

Sceptics are often called "Climate Change Deniers." But we KNOW that climate changes. It always has. By suppressing the Medieval Warm Period and the Little Ice Age, the Alarmists tried to pretend that climate hadn't changed for 1000 or more years.

WHY did they lie?

Surely their lie, their reliance on the flawed "Hockey Stick" graph, was unscientific.

The data sets used by the Alarmists show no warming for at least 18 years. The Alarmists at first denied the hiatus and then found 52 different excuses (link) to try to explain the reason for the lack of warming.

Although they were aware of the hiatus in global warming, the IPCC, in their latest Assessment Report, strangely and some would say unscientifically upgraded their gloom prediction from 90% to 95% (Link)


'How did they miss the fact that the pause is the most important issue in the public debate on climate science, for well over a year now?'

“The IPCC needs to get out of the way so that scientists and policy makers can better do their jobs. We need to put down the IPCC as soon as possible.”


And THEY call US deniers?


“The reality is right now we’ve got an administration in the Obama administration that are science deniers when it comes to harnessing America’s energy resources and potential to create good-paying jobs for our economy and for our future."

The Alarmists, the Global Warming Nazis, they are the true deniers.