Is the Australian Temperature record Accurate?

ACORN is prepared by the BOM from readings of temperature from sites around Australia. These readings are the raw data.

Recently a group of researchers including Dr Jennifer Marohasy, have questioned the accuracy and reliability of ACORN because the final temperatures which form ACORN differ from the raw data. Dr Marohasy has found that the raw data has been adjusted or homogenised by the BOM so that warming appears where no warming or less warming was shown by the raw data. 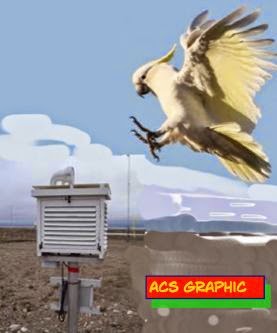 Torok provided some amusing and typically Australian examples of discontinuities such as Cockatoos stealing or destroying the thermometers and their screen and a suspicion that unusual hot records at a site were due to the site recorder increasing the temperature so his council worker friends could have the day off with pay.

A common reason for an unusual temperature is a move in the position of the thermometer.

These potential reasons for adjusting the temperature are called metadata. It is crucial that adjustments have some metadata reason to justify them and most importantly that the adjustment not increase or alter the trend in the raw data.

However it seems that adjustments at several sites have occurred without genuine evidence in the metadata about a discontinuity in the raw data.

In the analysis of the ACORN records compared with the raw data Dr Marohasy and the research group have found adjustments which increase or even create a warming temperature trend without any support from the metadata. 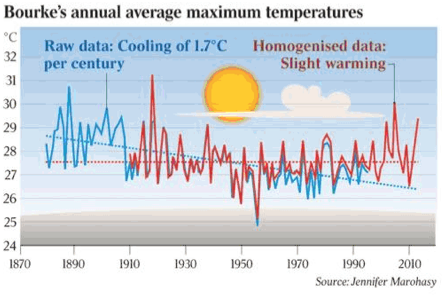 In the Newcastle region the temperature site at Williamtown also shows a marked difference between raw minimum temperature data and the ACORN temperature after homogenisation by BOM. 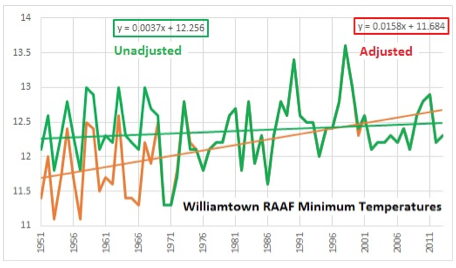 In the case of Rutherglen because the BOM has decreased the minimum temperature backwards from 1973 to 1913 the difference between the raw data and the adjusted data in 1913 is 1.8C. BOM has said this was justified because the thermometer site at Rutherglen was moved.
However, retired
natural resources scientist Dr Bill Johnston, who worked at Rutherglen says that no evidence of a site move at Rutherglen has been provided by BOM.

Government policy is based on climate data which needs to be reliable and this includes temperature records. If well-credentialed amateurs have revealed some possible faults with the temperature record then there is an obligation on government departments such as the BOM, which advise and determine government policy, to consider those possible faults in an open and transparent manner