The Sky isn't falling or warming. 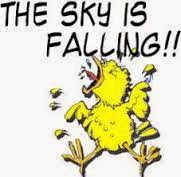 But it really was an acorn that fell on Chicken Little's head. Although Chicken Little had the best of intentions, the poor little yellow chick dragged Henny Penny and Ducky (UN)Lucky to the fox's lair and they were never seen again.