There have been some interesting exchanges on Facebook recently. Shea Lewis, who is good value, went to the trouble of graphing the RSS tropical temperature record compared with the Coupled Model Intercomparison Project [CMIP 3]. CMIP 3 is an ensemble of temperature results produced by a number of Global Climate Models [GCM]. CMIP 3 was used as the basis for the fourth IPCC report, AR4. The graph below shows the CMIP 3 results compared with the official land based temperature indices: 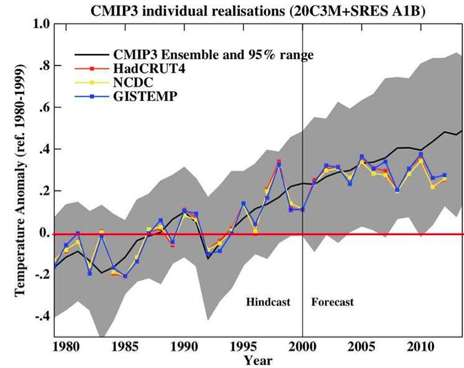 The grey area is the range of results from all the GCMs taken to a 95% deviation; the wide range is because the assumptions about all the climate variables are tested in different combinations in the CMIP 3 GCMs. The black line is the mean of the ensemble results and the land based temperatures are in colour.

At first glance it looks as though there is a reasonable match. But it must be understood that no one CMIP 3 GCM necessarily achieved the black mean; the range of results is a spread of over 0.5ºC above and below that mean. So the overall range of uncertainty of the climate models of over 1ºC exceeds the entire observed warming during the 20th Century by at least 30%!

Then the fact that the land-based temperature indices have been mired in controversy about their adjustment procedures and results must be considered. Steve Goddard provides a great example of how these adjustments can increase the temperature trend here. Warwick Hughes provides another example for Melbourne here. It is obvious that the land based temperatures have been tainted by a warming bias so the at least 30% overreach for CMIP 3 is likely to be much higher.

How much higher can be seen by Shea’s graph of the Tropics based on RSS, one of the satellite temperatures and therefore arguably the most reliable of the temperature indices:

Shea’s graph shows CMIP 3 in yellow with RSS in black and the various trends shown including red from 1994, which has a trend of-0.009C or cooling.

That’s right, cooling. As CMIP 3 wanders off into an imagined hot future the reality is the opposite. Shea’s final, self-explanatory graph shows this starkly: 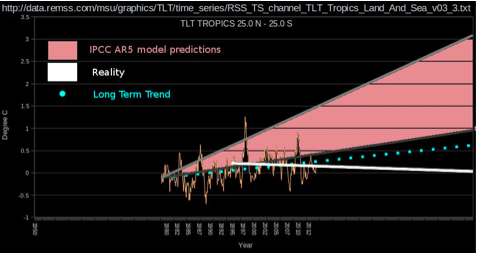 MEaSUREs DISCOVER Project and the AMSR-E Science Team.
Data are available at www.remss.com.
Posted by Geoff on July 01, 2014 No comments: 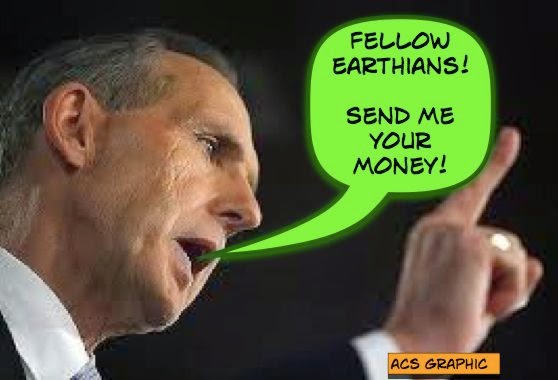 The Federal Liberal party is targeting environmental groups it claims may be using tax deductible donations to fund illegal activism.

The Federal member for Bass, Andrew Nikolic, introduced a motion yesterday at the party's federal council meeting to strip eco-charities of the same rights permitted to other charities, including tax-deductable donations. The motion was unanimously endorsed.

Mr Nikolic said taxpayers should not be subsidising the actions of 13 environmental groups who are allowed to receive tax-deductable donations.

He believed some of the groups practice political activism.

The main groups targeted are


The Wilderness Society makes false statements such as

Continuing to burn fossil fuels at the current rate will lead to catastrophic climate change.  The International Energy Agency recently warned that unless we act now, we could face warming of up to 6 degrees by the end of the century. We know we need to keep warming well below dangerous 2 degree levels, and the Climate Council tells us we have a total remaining global emission budget of around 600 billion tonnes if we are to do that.

The Australian Conservation Foundation is a blatant activist group and tells whoppers as well:


Climate change is the consequence of unchecked pollution. When carbon emissions caused by human activity enter the air they have dangerous effects on the environment, the economy, and our wellbeing.

Let's not forget Greenpeace, whose co-founder revealed that the environmental group (and movement) was hijacked by

political and social activists who learned to use green language to cloak agendas that had more to do with anticapitalism and antiglobalization than with science or ecology.