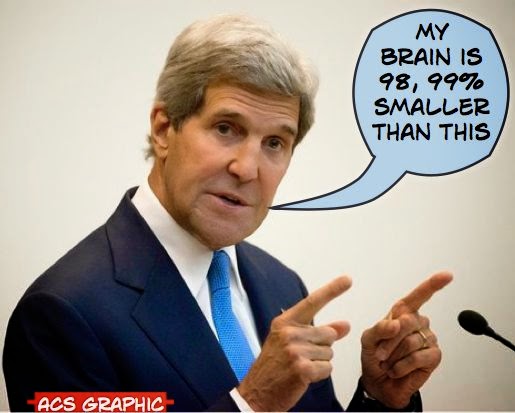 US Secretary of State John Kerry is ramping up his foolishness.

In May, Kerry referred to Global Warming Realists as "the naysayers and the members of the flat earth society.." and tried to indicate that we are risking the planet.

But, as this blog pointed out:


Surely, as your Warmists are trying to lower atmospheric CO2, you are risking nothing less than the future of the entire plane.


CO2 is greening the planet (link, link) and, in fact, too little carbon dioxide will destroy the Earth. (link)

A few days later Kerry got caught out falsely stating that temperatures were “unprecedented” and broke “every record that’s ever been seen.” WRONG! (link)

On both of these occasions, Mr Kerry used the flawed 97% consensus. In an open letter to Mr Kerry, we pointed out


Do you realise, when you say: “Ninety-seven percent of the world’s scientists tell us this is urgent,” you are quoting very flawed studies? See link, link, link. Surely you were aware that these studies were flawed, falsified fables?

Mr Kerry has obviously now realised that the 97% figure was wrong. He has changed his mind.


I believe in everything until it's disproved.


Well, the AGW hoax has been disproved, the AGW hypothesis has been falsified.