Working for the Man....or....the Australian Taxpayer 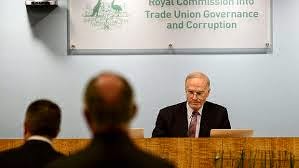 What the MSM doesn't tell you:

Today, the Royal Commission into Trade Union Governance and Corruption took evidence from Stephen Paul Donnelly, currently the assistant secretary of the Victorian branch of the Australian Labor Party.

In 2009 Mr Donnelly was working for Senator David Feeney.


David Feeney is named 6 times by Ms Gillard in the Record of Interview with MD Peter Gordon on 11 September, 1995.   David Feeney was a central figure in Ms Gillard's claims that she paid for all her own renovations.   Here are the 6 Feeney "grabs" from the record of interview, then I'll publish the whole of the section for context.   The speaker is Ms Gillard, 11 September, 1995.

So what events did Mr Donnelly reveal while he was working for Senator Feeney and therefore, presumably for us, the Australian taxpayers?

He revealed that he was


Although he was then working for Senator Feeney on the public purse, today he gave the following information: (LINK)

Q. That was up in Queensland, wasn't it?

Q. Who were you working for at that time?

A. It followed the time that I worked on the Federa lelection campaign in which I'd accrued enough time in lieu that I was working on my own time under an arrangement with Senator Feeney.

As far as this blog can ascertain, there was not a word in the Main Stream Media questioning whether Mr Feeney was campaigning for Union candidates while being paid by the public purse.

Dr. Christian Schlüchter, Professor emeritus for Quaternary and Environmental Geology at University of Bern, discovered 4000 year old chunks of wood at the edge of glaciers in the Swiss Alps.

As Larry Bell writes ( for newsmax)


This finding indicated that the Alps were pretty nearly glacier-free at that time, disproving accepted theories that they only began retreating after the end of the little ice age in the mid-19th century. As he concluded, the region had once been much warmer than today, with “a wild landscape and wide flowing river.”

Dr. Schlüchter’s report might have been more conveniently dismissed by the entrenched global warming establishment were it not for his distinguished reputation as a giant in the field of geology and paleoclimatology who has authored/coauthored more than 250 papers and is a professor emeritus at the University of Bern in Switzerland.

To the Alarmists, the Real Deniers, this was heresy. According to the religion of Climate Consensus Orthodoxy glaciers only started to retreat in the late 20th Century Warming. There could not have been scenes (like the one picture above) under these glaciers.

Of course, Greenland WAS Green 3 million years ago but that wouldn't suit the Alarmists either.

In a recent interview, Dr. Schlüchter said: “I wasn’t supposed to find that chunk of wood because I didn’t belong to the close-knit circle of Holocene and climate researchers. My findings thus caught many experts off guard.."

Other evidence exists that there is really nothing new about dramatic glacier advances and retreats. In fact the Alps were nearly glacier-free again about 2,000 years ago. Schlüchter points out that “the forest line was much higher than it is today; there were hardly any glaciers. Nowhere in the detailed travel accounts from Roman times are glaciers mentioned.”  (bold added)

Schlüchter criticizes his critics for focusing on a time period which is “indeed too short.” His studies and analyses of a Rhone glacier area reveal that “the rock surface had [previously] been ice-free 5,800 of the last 10,000 years."

Dr Schlüchter also mentioned that when Hannibal crossed the Alps, "The forest limit was much higher than today, there was little glacier." (link)

What’s more worrisome, Schlüchter’s findings show that cold periods can strike very rapidly. Near the edge of Mont Miné Glacier his team found huge tree trunks and discovered that they all had died in just a single year. The scientists were stunned.The year of death could be determined to be exactly 8195 years before present. The oxygen isotopes in the Greenland ice show there was a marked cooling around 8200.”


That finding, Schlüchter states, confirmed that the sun is the main driver in climate change.

Today’s “rapid” changes are nothing new