The RISE and FALL of CSIRO Sea Levels 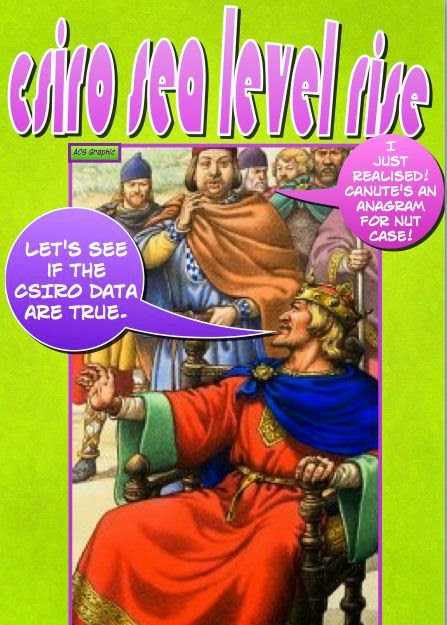 The CSIRO issued a warning to "150 million people [who] live within 1 metre of high tide level, and 250 million within 5 metres of high tide." (link)


The Oceans are changing. Many observations show that the ocean has been changing over the last several decades. One aspect of this is a warming ocean resulting in increase of ocean volume through thermal expansion. There has also been addition of water from glacier and ice sheets and changes in storage of water on or in the land (e.g. retention of water in man-made dams and extraction of water from aquifers). These together result in changes in sea level.

And even more alarm from CSIRO Fellow John A. Church


Changes in ocean temperatures and currents and in the oceans' interaction with the atmosphere are already altering the frequency, intensity, and distribution of storms, droughts, floods, heat waves, and cold spells. And by 2100, rising sea levels from ocean thermal expansion and increasing ocean mass (from melting glaciers, ice caps, and the Greenland and Antarctic ice sheets) will expose an additional tens of millions of people annually to the risk of coastal flooding. (LINK)

The power of La Niña to evaporate water from the oceans was boosted by the ongoing high sea-surface temperatures that are part of a long-term trend of ocean warming. That trend has been shown to be associated with the release of greenhouse gases from the combustion of fossil fuels and deforestation.

This massive rain event was so significant that sensors on-board the twin satellites GRACE estimated a decrease in ocean water mass of 1.8 trillion tons. That remarkable finding was measured by changes in the Earth’s gravitational field, brought about by the transfer of water from the ocean to the atmosphere and land surface. 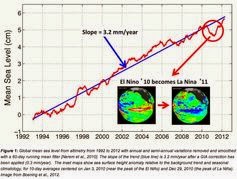 This made the ocean’s sea level fall by 5 millimetres from the beginning of 2010 to mid-2011, going against the average sea-level rise of 3mm a year over the previous 18 years associated with global warming.


So do we believe the CSIRO that warns us of rising sea levels or the other CSIRO that reports global sea level dropping?

And speaking of each way bets.....

I DO like to be beside the Seaside in my Beach House in the Blue Mountains:

False Alarms in the Frigid Zone

Another Issue of "Carbon Sense” prepared by The Carbon Sense Coalition.

Alarmists see a man-made calamity in every change in the Antarctic ice cap.


There is nothing unusual about ice caps melting, ice sheets splitting, icebergs calving or glaciers and sea-ice advancing or retreating. This has been happening naturally for eons.

The Antarctic ice comes and goes. In 1513, a Turkish sea captain, Piri Reis, using ancient maps, produced an accurate chart of the coastline of Antarctica which is now covered by a kilometre of ice. Geological evidence suggests it was ice-free just 6,000 years ago. Several past eras of icing and melting follow the natural cycles of the solar system, totally ignoring man’s puny activities.

It is not surprising that most glaciers and ice sheets show melting and calving at sea level while snow is being added at their source. If this did not occur, much of Earth’s water would eventually become tied up in the ever-growing ice sheets (as happened in the Ice Ages). And when land-based ice caps melt during periodic warm eras, the sea level inevitably rises and all life-forms must adapt to the new shoreline.

Sea levels rose swiftly by some 130 metres as ice sheets melted at the end of the latest ice age just 13,000 years ago. This made islands out of many coastal hills. We are all descendants of a long line of survivors who had the sense to adapt to these dramatic sea level changes without needing edicts from climate witch-doctors prohibiting camp fires and ordering villagers to abandon their seaside settlements.

There is no evidence that man’s production of carbon dioxide is having any effect in Antarctica. Despite rising levels of atmospheric carbon dioxide, global surface temperatures are steady, global sea levels are rising very gently and the Antarctic Ocean must be cold because the sea-ice surrounding Antarctica has increased to record levels. 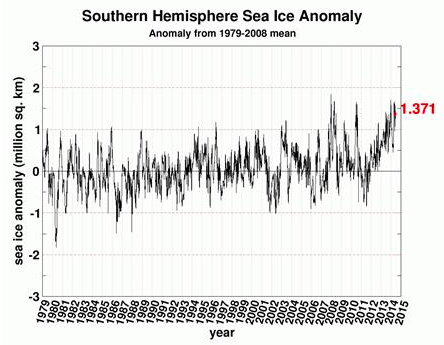 Examination of ice cores suggests that it takes several hundred years for Earth’s vast oceans to fully adjust to cycles of global warming and cooling. Thus today’s oceans may be still warming, expanding and degassing in gradual adjustment to the medieval warm era which peaked about 700 years ago.

Ice caps grow and shrink naturally, depending mainly on the relative temperatures of the atmosphere and the surrounding oceans. A warm ocean with a cold atmosphere is a recipe for rapid accumulation of snow and ice on adjacent land. Moisture evaporates rapidly from the warm ocean, and then the cold air over the land triggers precipitation. A warm atmosphere and a cool ocean will reverse that process and see the ice caps melt and return to the ocean. It is all about the ratio of precipitation vs outflow and melting.

The Arctic is a totally different story, because here, there is no land – just the Arctic Ocean. Floating sea-ice comes and goes, depending on the temperature and direction of winds and ocean currents. However, the melting of floating sea-ice has no effect whatsoever on global sea levels.

The amount of Arctic Sea ice trended down for the 15 years ending 2008, but seems to have stabilised since then.  However, it has disappeared in the past and will probably disappear again. 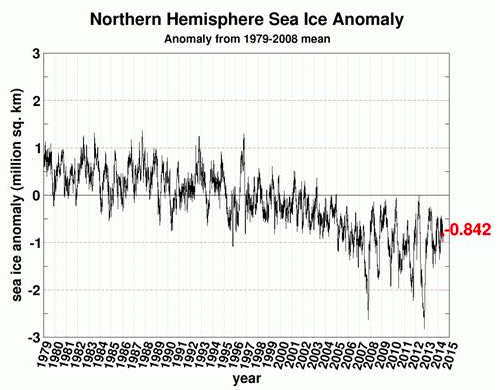 Undersea volcanism is adding warmth to oceans at both poles and under-ice volcanoes may well be melting and undermining ice sheets in the West Antarctic.

Someday the huge Antarctic ice cap may melt, or large slabs of ice may slip off the continent into the sea. When that happens, the seaside homes of Al Gore and Tim Flannery will be submerged and other shore-dwelling humans must evacuate or drown.

“Most of the stuff people
worry about ain’t never gonna happen.”

These are all un-stoppable natural events. There is no chance that polar ice will be affected in the slightest by carbon taxes in Australia, wind turbines in the North Sea, or solar panels plastered all over California.

For those who would like to read more about frigid zone alarms:

“Unstoppable Collapse of the West Antarctic Ice Sheet” is not happening:
http://carbon-sense.com/2014/06/11/unstoppable-collapse-of-the-west-antarctic-ice-sheet-is-not-happening/

Mt Erebus – the most active volcano in Antarctica:
http://news.nationalgeographic.com.au/news/2013/13/131118-antarctica-volcano-earthquakes-erupt-sea-level-rise-science/

The Australian government is holding an unnecessary enquiry into whether to abolish the Renewable Energy Target (RET), which mandates that 20% of Australian electricity must come from renewable sources by 2020.

There is only one “renewable” energy source that makes sense for grid power in Australia – hydro-power. But all the good hydro dam sites are either already equipped, or have been sterilised by the same people who demand that we use renewable energy.

Geo-thermal energy works, but Australia’s geology does not have many attractive geothermal sites. Nuclear is also “emissions free” but it is politically prohibited. And we have zero chance of getting approvals to clear-fell forests of timber for burning as biomass.

Which leaves wind and solar as Australia’s “renewable” options. Neither can ever produce continuous power at their “rated” capacity.  They are intermittent energy producers. The sun sets every day and there are cloudy days, stormy days and windless days. No amount of “research” will change these laws of nature.

Wind and solar power can be useful in some situations such as remote locations, but when connected to the grid they are energy cripples that can only exist on crutches supplied by reliable power plants using hydro, coal or gas, and subsidised by consumers or tax payers.

The costly RET can have no measurable effect on global warming. It imposes needless costs on poorly utilised backup facilities, and increases transmission costs, network instability, capital destruction and operating losses for existing generators. Germany has already shown how to create renewable energy chaos – let’s not follow their sad example.

This enquiry is an excuse for inaction and delay. The Minister could have dictated the answer to his secretary before smoko one morning: “If we are serious about providing Australian industry and consumers with economical reliable electricity, we must abolish the RET now.”

And if the green Senate refuses to abolish the act, the Minister can use his regulatory powers to change the renewables target from 20% to 2%, and the time limit from 2020 to 2120.

The environmental debate today is so corrupted by politics and propaganda that facts are too often distorted, and exaggeration of risk is commonplace.

The vicious war on hydro-carbon fuels is a good example where certain substances are labelled “poison” or “pollution” when associated with coal utilisation, but blithely ignored in other areas.

For example, climate alarmists have labelled carbon dioxide produced by carbon fuels as a “pollutant” and the US Supreme Court even declared it to be so. But that ignores the simple truth that 100 times more carbon dioxide exists in the lungs of every animal on earth than in the air; it is an ingredient in beer, bread and champagne; it is essential nutrition for all plant life on earth; and this plant life supports all animal life - hardly a pollutant.

With their “CO2 pollution” propaganda failing, alarmists are now accusing coal of filling the air with mercury “poison”, which sounds really scary. Their aim now is to use supposed mercury dangers to force the closure of more coal-fired power stations. This is just another aspect of the war on carbon fuels - they want to kill coal by fair means or foul.

However if tiny traces of mercury are so dangerous, why do millions of people allow dentists to put silver amalgam (with 50% mercury) in their teeth? And why does the EPA ignore all the mercury waste that dentists flush down their sinks every day?

And why does the US FDA allow mercury compounds to be used in flu vaccines? And the people attacking the minute amount of mercury in coal are the same people promoting dangerous mercury-laden compact fluorescent lights.

Traces of mercury occur widely in rocks and minerals and it gets taken up in minute amounts by plants, water and animals living near those sources. When those plants form coal, tiny traces of mercury may be there too. In rare places the mercury content of rocks is so high that dangerous quantities may get into nearby plants and sea life. In other places, bushfires release more mercury to the atmosphere than coal-fired power stations.

Mercury has been circulating in the biosphere for far longer than man has been burning coal. Whether it is poison or harmless depends on the dose. 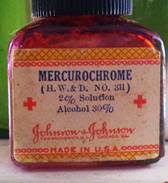 To read more on mercury and mankind see:
http://breakingviewsnz.blogspot.com.au/2014/06/viv-forbes-poison-propaganda.html


Believe it or Not – Al Gore Grilled at Last - Retraction

In “Carbon Sense” last month we included a video purporting to be Al Gore being grilled on Global Warming in the US Senate:
https://www.youtube.com/watch?v=Z8r-hNfHXXY

We were too trusting. Two readers advised us that this video appears to be patched together from several sources and is not an authentic interview. We try to ensure what we say is true, but this was is not true. Apologies to readers and Al Gore: