I’ve been banned or censored from many sites for daring to criticise and ridicule what I consider to be the lie of man-made global warming [AGW].

I was banned from Open Mind for daring to talk about the Great Pacific Climate Change [GPCC] and its effect on temperature, a subject I later co-authored a paper about with David Stockwell. That paper although not published in a Journal still receives regular views and citations. David and I did another paper in response to Grant Foster’s [who runs Open Mind] critique of McLean’s famous paper about natural trends. It is now the case that natural factors are being accepted as capable of producing temperature trends as well as just variation.

I have been banned from Real Climate for talking about the excitation rate of CO2 and the impact on that by Beers Law; that was my first run in with Eli Rabett, the pseudonym of Josh Halpen, a prominent AGW wise guy.

Andrew Bolt banned me for using Richard Dawkins meme theory to compare Islam to a virus. I think he is now coming around to my point of view.

The Conversation has so heavily censored me that I gave up going there.

I have been banned from The Drum. When Jonathan Green was editor we had some tussles because he is a dyed in the wool alarmist. He still published me, by myself and when I co-authored articles with Jo Nova and David Stockwell. But when a patronising astronomer called Michael Brown questioned my ‘credentials’ and therefore eligibility to comment on AGW,  Jonathan, or at least the ABC’s internal committee, made my first degree disappear. The sorry saga is described here. Still Jonathan Green was better than his successor, Chip Rowley, who allows no sceptics including me from being published at his Drum.

Now On Line Opinion (OLO) has stepped up and banned me from writing any more articles on AGW. Graham Young, the editor of OLO has said he wastes too much time checking what I write to prevent his site looking foolish. He only wants experts to write about AGW.

I was first attracted to OLO when Clive Hamilton got the sulks because Graham was allowing too many ‘deniers’ to be published. Clive packed his bald skull and whatever he calls a bat and left the building. Hamilton is a serial offender and wanted ‘deniers’ to be banned from the ABC. David Stockwell and I responded to this in the good old days when our ABC belonged to everyone and not just the left elite. There is a certain irony that Hamilton’s views were finally successful in having sceptics banned from The Drum and now after banning OLO from his opinion Hamilton’s spirit lives on in having a sceptic banned from writing about AGW science at OLO.

What Hamilton was advocating was just plain old censorship; and it was censorship based on the same premise as every example of censorship is based on: that is the censors are better, smarter and more moral than those who need to be censored. For Hamilton the myth of the 97% consensus about AGW was and is still real. The experts have spoken, the science is settled and the hoi polloi should shut up and take their medicine. And under no circumstances should ‘deniers’ be allowed equal time to foment discontent and disobedience amongst the masses.

It is a vile position and it is this very attitude which informed the attempts by the Gillard government at the behest of Bob Brown to silence dissent about AGW in the form of the Finkelstein Report. Jonathan Green allowed me to argue against this at The Drum. And Graham Young gave me three bites of the cherry at OLO.

Increasingly though Graham has expressed reservations about my articles about AGW. In one conversation he admitted to being sick of defending my obvious errors in my articles. It turns out he was thinking of an article by Viv Forbes which was based on a graph which could have been better: 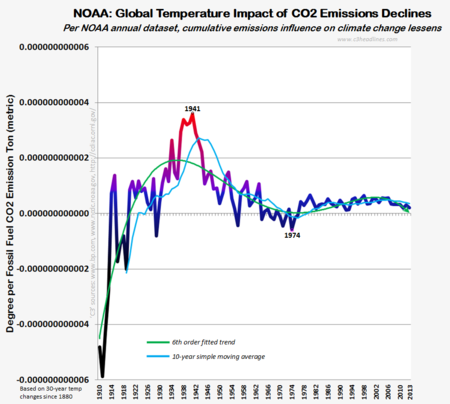 The graph was from here, a sceptic site. The graph purported to show the declining effect of extra CO2 on temperature; this effect is described by Beers Law which has been neglected by AGW. As usual the AGW supporters focused on the mistake in the graph. Bugsy, a frequent alarmist commentator at OLO, who apparently has some scientific credentials, summed up the ‘problem’:

Perhaps then Graham, you could explain to us how emitted CO2 before 1922 can give an overall cooling effect per ton on temperature, as Viv's first graph seems to imply?

The problems with the graph were discussed further as the thread continued with Graham making several comments including saying:

I have no intention of "withdrawing" the graph. It's not my essay, and this is an opinion site, not some refereed journal. There are some issues with the graph, principally the sixth order polynomial, but it has its good points too.

I can only assume that he continues to confuse the problems with this graph in Viv’s article with my articles which had no such problem. If I’m wrong about these mistakes then I invite Graham to spell them out.

But the fact is it doesn’t matter who you are, if you are a sceptic you will be attacked by alarmists. They will censor you, abuse you, nit pick your arguments and avoid any concession or acknowledgment of a problem with AGW. I have seen the best climate scientists in the world be abused and criticised for merely being sceptical; people like Richard Lindzen, Roy Spencer, John Christy, the Pielkes, junior and senior, Judith Curry, Bob Carter, Ian Plimer, Stuart Franks and so on have all been subject to approbrium for their scepticism.

So Finkelstein was based on a lie. It is not the lack of qualifications which prompted the alarmists to object to non-qualified people such as myself criticising AGW, it was and still is the act of criticising itself. AGW from day one has relied on suppression of opposing views; the email scandal told us that. AGW can only work that way because the experts of AGW have been consistently wrong and AGW science has been inadequate. What do you do when the experts and science are wrong? If the experts are wrong then the opinion of a non-expert is just as valid.

I am not a scientist. I have co-authored some papers with David Stockwell and written many articles on the science and about AGW. I always go to primary sources and read and research the papers and science. Sometimes I get things wrong but so what? If AGW science was like other science and processed in an open and transparent way the mistakes would be resolved in consequent discussion which is what OLO offers in its comments. AGW science is however not like other science; it is flawed. And because it is flawed its supporters resort to tactics such as exaggeration, lying, bullying, insults and censorship and a lack of transparency.

Andrew Bolt recently suggested the conservative side of politics is losing the argument in the battle with the left and the Greens because the left is passionate, aggressive, furious and full of rage. The conservatives are polite and try to engage the left. It is impossible and the reasonable approach is swamped by the fury.

The ‘debate’ in AGW is the same. I began debating AGW back in 2006 in a calm, reasonable manner and was insulted from pillar to post and called an “idiot” for daring to question my betters. I am not calm any more. I still do the research but I respond to insults with insults and calling a spade a spade. Given that the ‘science’ of AGW is such a mess the views of the AGW experts are worth no more than informed citizens such as myself who are willing to express their opinion about the lie of AGW. If that sounds high-handed too bad

It is a pity that Graham Young has stopped me from doing that on his site. At the very least, as Graham noted, his site is an opinion site, and my opinion is as good as the opinion of any expert.
Posted by Geoff on May 26, 2014 No comments: