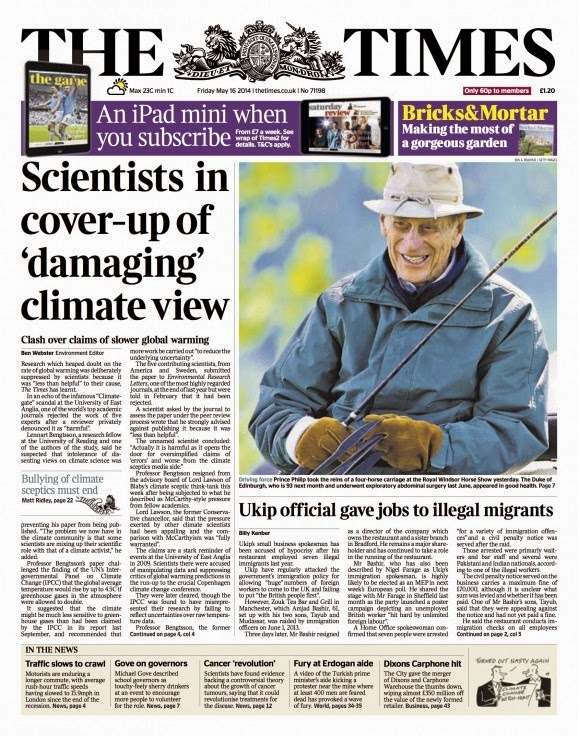 The Times reports that the Global Warming Nazis (GWN) are at it again. In the spirit of Climategate, the GWN are suppressing data that doesn't conform to their warped view of AGW.

Scientists in cover-up of ‘damaging’ climate view (behind  firewall)

Research which heaped doubt on the rate of global warming was deliberately suppressed by scientists because it was “less than helpful” to their cause, it was claimed last night.

In an echo of the infamous “Climategate” scandal at the University of East Anglia, one of the world’s top academic journals rejected the work of five experts after a reviewer privately denounced it as “harmful”.

Lennart Bengtsson, a research fellow at the University of Reading and one of the authors of the study, said he suspected that intolerance of dissenting views on climate science was preventing his paper from being published.

GWPF's Benny Peiser reports more of the story from behind the firewall: (LINK)


Professor Bengtsson’s paper challenged the finding of the UN’s Inter-governmental Panel on Climate Change (IPCC) that the global average temperature would rise by up to 4.5C if greenhouse gases in the atmosphere were allowed to double.

It suggested that the climate might be much less sensitive to greenhouse gases than had been claimed by the IPCC in its report last September, and recommended that more work be carried out “to reduce the underlying uncertainty”.

Should scientists wish to "reduce" uncertainty or should they suppress papers that did not help their cause? Should a true scientist HAVE a cause?


A scientist asked by the journal to assess the paper under the peer review process wrote that he strongly advised against publishing it because it was “less than helpful”.

The unnamed scientist concluded: “Actually it is harmful as it opens the door for oversimplified claims of ‘errors’ and worse from the climate sceptics media side.”

There is a plethora of comment about Professor Lennart Bengtsson who, for a short time this week joined the advisory board of the GWPF until GWN thuggery caused him to resign:


A leading climate scientist has resigned from the advisory board of a think-tank after being subjected to what he described as “McCarthy”-style pressure from fellow academics. Professor Lennart Bengtsson, a research fellow at the University of Reading, said the pressure was so intense that he would be unable to continue working and feared for his health and safety unless he stepped down from the Global Warming Policy Foundation’s academic advisory council. He said the pressure had mainly come from climate scientists in the US, including one employed by the US government who threatened to withdraw as co-author of a forthcoming paper because of his link with the foundation. (link)

Dr Judith Curry wote of this thuggery, of this Climate McCarthyism: (link)


I deeply regret that any scientist, particularly such a distinguished scientist as Bengsston, has had to put up with these attacks.  This past week, we have seen numerous important and enlightening statements made by Bengtsson about the state of climate science and policy, and science and society is richer for this.  We have also seen a disgraceful display of Climate McCarthyism by climate scientists, which has the potential to do as much harm to climate science as did the Climategate emails.  And we have seen the GWPF handle this situation with maturity and dignity.

Nations around the world are spending unnecessary billions on the now exposed  falsified man-made global warming hypothesis.  From the Times item pictured above:


Professor Bengtsson, the former director of the Max Planck Institute for Meteorology in Hamburg, said he accepted that emissions would increase the global average temperature but the key question was how quickly.

He added that it was “utterly unacceptable” to advise against publishing a paper on the ground that the findings might be used by climate sceptics to advance their arguments. “It is an indication of how science is gradually being influenced by political views. The reality hasn’t been keeping up with the [computer] models. Therefore, if people are proposing to do major changes to the world’s economic system we must have much more solid information.”