But playing nasty is part and parcel of the alarmist program as many good sceptical scientists have found including the latest Lennart Bengtsson . When you have no facts as the alarmists have not then all you can do is attack the sceptics.

But by far the biggest piece of rubbish from the alarmist camp has been the release of a new paper about Antarctic winds: Evolution of the Southern Annular Mode (SAM) during the past millennium. This paper is co-authored by Matthew England. England has written other papers on wind. His past papers describe how winds have driven the missing heat to the ocean bottom which explains the temperature hiatus. The absurdity of that proposition is critiqued here.

England’s latest paper explains how increased winds are cooling the Antarctica but causing droughts in Southern Australia and causing the Western Antarctic Peninsula to rapidly melt.

England’s winds are marvellous things; they can do so many things; stop temperature, cause cooling, droughts and warming; all at once. 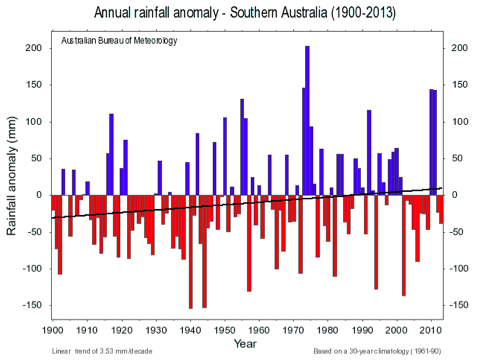 There was a drought from 2000-2010 but that was not unusual with the 1920s drought being bigger and rainfall since then has been above normal.

It is also apparent that England is not even sure what cause the droughts and rainfall in Southern Australia. In 2009 England co-authored a paper which concluded it was the Indian Ocean Dipole [IOD] which caused the worst droughts in South East Australia.

So which is it Matthew, the IOD or the SAM causing the droughts; so many choices, so little sense.

And what about these winds. England reckons they’re increasing and causing all sorts of mischief. But are global winds increasing? Not according to McVicar, Roderick et al 2012 who conclude in fact the globe is stilling. And according to Gabriel Vecchi, a prominent AGW scientist:

The vast loop of winds that drives climate and ocean behaviour across the tropical Pacific has weakened by 3.5% since the mid-1800s, and it may weaken another 10% by 2100.

In Australia winds and storms are declining in South East Australia and that comes direct from the BOM’s horse’s mouth and their top AGW scientist Blair Trewin.

In fact, according to AGW theory and another top AGW scientist, Richard Muller, winds should decrease because of a decline in the energy gradients in a warming world. There are plenty of studies and the IPCC which confirm this.

And what about the Western Antarctic Peninsula? England and his team say it is warming due to AGW. In fact the WAP has been accumulating snow since 1850 and that estimates of ice loss in the WAP may be a mistake based on Glacial Isostatic Adjustment [GIA] where the extra ice compacts the ice level and causes people to think there is less ice.

Of course if there is warming in the WAP it may be due to these volcanoes: 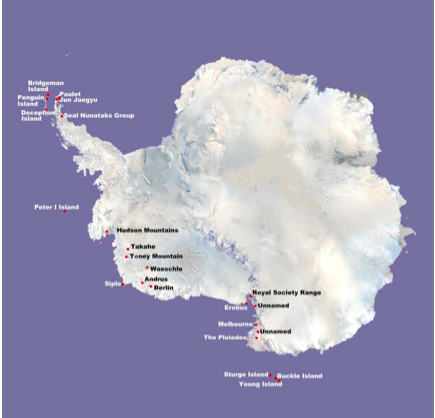 The Antarctic has nearly all its volcanoes in the West with a concentration in the WAP. Since air and sea temperatures are going down in the Antarctic any melting in the WAP can’t be due to AGW. This tends to be verified by the rate of sea level rise declining and with movements in sea level correlated with the PDO not AGW.

In short England’s latest paper contradicts his previous papers and other AGW evidence which also contradicts other ‘evidence’. Take away the ‘evidence’ and what you are left with is contradiction. And that just about sums up AGW.
Posted by Geoff on May 16, 2014 No comments: