"The 2013 NIPCC report contains an Executive Summary and a Summary for Policy Makers which present the findings in an approachable way for general readers.
"From the Summary For Policy Makers:
"NIPCC’s conclusion, drawn from its extensive review of the scientific evidence, is that any human global climate signal is so small as to be embedded within the background variability of the natural climate system and is not dangerous. At the same time, global temperature change is occurring, as it always naturally does. A phase of temperature stasis or cooling has succeeded the mild twentieth century warming. It is certain that similar natural climate changes will continue to occur.
"In the show today, Professor Carter goes through some of the key findings in the latest report and addresses some popular misconceptions about polar ice and climate variability over the past ten thousand years."
Listen here.

Earth Hour vs Up All Night 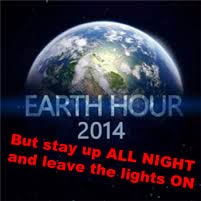 The stupidity of the Green/Communist movement are highlighted by two upcoming events:

Saturday 29 March, Earth Hour invites Australians to host friends and family at their homes or join a community gathering to watch a remarkable, world-premiere Earth Hour documentary about the Reef and climate change, before turning off their lights at 8:30pm to make a stand for its future.

One could ask why? There has been no warming for more than 17 years. Are they aware of this, or have the lights already been turned off in their brains?

Meanwhile, somewhere else in the Cuckoo Land of the Red Greens, they are saying "Stay Up All Night for climate."

28 Senators (and many others.) are staying up all night "for climate."


The event, said Sen. Brian Schatz (D-Hawaii), is meant "to show the growing number of senators who are committed to working together to confront climate change."

The number of participating senators has grown since the event was first announced several weeks ago. Now they're up to 26 Democrats and two independents.

Will they keep the lights off? Or will their "Upallnight lights on" negate Earth hour?

Agenda 21, the Green Movement, UN and the Communists

Googling "Agenda 21, the Green Movement, UN and the Communists" is very revealing.

The top hit that it brings up is The Green Agenda with quotes:

As Dr Ileana Johnson Paugh wrote a year ago:

"He very deliberately did it.  He set up the United Nations Environment Program and then he worked through that with the World Meteorological Organisation and the IPCC was set up by them.  That meant that every government weather agency around the world was involved in the IPCC.  They appoint the scientists that they want to be on it and they also of course provide the funding and that has meant that the funding has only got to one side of the debate and Strong knew this.  But this is why he organized it that way through the WMO..."

This blog has recorded (LINK) that Greenpeace Co-Founder Patrick Moore noted that the collapse of Communism led to  Communists entering the Green Movement.


The Cold War was over and the peace movement was largely disbanded. The peace movement had been mainly Western-based and anti-American in its leanings. Many of its members moved into the environmental movement, bringing with them their neo-Marxist, far-left agendas. To a considerable extent the environmental movement was hijacked by political and social activists who learned to use green language to cloak agendas that had more to do with anticapitalism and antiglobalization than with science or ecology. (Source)

Ex-President of the Czech Republic, Vaclav Klaus, although, while  he explicitly rejected suggestions climate change was a kind of communist conspiracy, he did liken the climate change hoax to a totalitarian philosophy similar to Communism which will inhibit democratic freedoms. (source)


Obama was blindly sticking to the simple Marxist theory … ‘there’s going to be a revolution.We need to be organized and grow the movement.

Drew ended his article by saying, “I know something about what Obama believed in 1980. At that time, the future president was a doctrinaire Marxist revolutionary.” (Source)


“[Saul] Alinsky’s son, David, said: ‘Barack Obama’s training in Chicago by the great community organizers is showing its effectiveness. It is an amazingly powerful format, and the method of my late father always works to get the message out and get supporters on board. When executed meticulously and thoughtfully, it is a powerful strategy for initiating change and making it really happen. Obama learned his lessons [from my father] well.’”

Obama’s mother was as far left as one can get and still have both feet on terra firma. Her Marxist friends referred to her as a “fellow traveler,” i.e., a communist sympathizer. (source)

Read More at: Time to admit Obama is a Communist

There may be similarities between the departures from the Green Movement of Patrick Moore and former Australian Greens leader Bob Brown. Christian Kerr wrote: (Link)


Speculation is running strongly that Brown's departure was directly linked to the intensifying power struggle between the environmental wing of the Greens and the increasingly influential bloc of former communists, socialists and members of other hard-left groups, including NSW Senator and former Moscow loyalist Lee Rhiannon, that has formed in the party over the past decade.


At Murdoch University, Bandt was a student activist and member of the Left Alliance. At that time, he was quoted as calling the Greens a "bourgeois" party.3 In 2008, Bandt completed a Ph.D. in law and politics from Monash University, with his thesis on Marxism.


Without Brown, the far left and extremists will steamroll over the others and become the new reigning force within the Greens.

These members include the now Deputy Leader, Adam Bandt, a self-identified former member of the Left Alliance that once admonished ultra-left groups such as Resistance and the International Socialists for not being left-wing enough.

Bandt has referred to the Greens as a ‘bourgeois party’ that can be used as a Trojan horse for pushing an anti-capitalist, socialist Marxist agenda. He has identified the Greens as the best avenue to achieving socialism in Australia.


Senator Lee Rhiannon, who has long-standing ties with far left and Marxist organisations, has also played a role in pushing the Greens further and further to the left.

She has led the Greens’ push for an anti-Israel boycott, and has openly supported the Boycott, Divestment and Sanctions movement, one of the many issues that has divided the Greens party. A former member of the Communist Party of Australia, she once argued that the Greens respresents the closest to the best of the CPA’s politics and methods.

Any voter thinking that the Greens are nature-loving, tree-huggers should do some re-thinking. Anyone thinking of voting for the Greens should examine their policies. See Greens Policies Global Governance.


The Australian Greens believe that:

The system of global governance must be reinvigorated to advance global peace and security, justice, human rights, poverty alleviation, health and environmental sustainability.

A vote for the Greens is a vote against your country's self-rule.