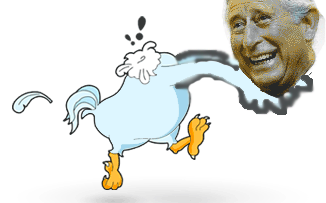 been taken in by the man made global warming hoax. He should first check his use of words; we know that climate changes so to call us climate change sceptics is a lie. But then to call us "headless chickens" is a bigger lie.


The Prince of Wales has launched an attack on climate change sceptics, describing them as the "headless chicken brigade" and accusing "powerful groups of deniers" of engaging in intimidation.  (link)

Lord Monckton has written a sting rebuttal to The King-in-Waiting published by Rog Tallbloke.


Your Royal Highness’ recent remarks describing those who have scientific and economic reason to question the Establishment opinion on climatic apocalypse in uncomplimentary and unroyal terms as “headless chickens” mark the end of our constitutional monarchy and a return to the direct involvement of the Royal Family, in the Person of our future king, no less, in the cut and thrust of partisan politics.

Option 1. Your Royal Highness will renounce the Throne forthwith and for aye. Those remarks were rankly party-political and were calculated to offend those who still believe, as Your Royal Highness plainly does not, that the United Kingdom should be and remain a free country, where any subject of Her Majesty may study science and economics, may draw his conclusions from his research and may publish the results, however uncongenial the results may be.

The line has been crossed. No one who has intervened thus intemperately in politics may legitimately occupy the Throne. Your Royal Highness’ arrogant and derogatory dismissiveness towards the near-50 percent of your subjects who no longer follow the New Religion is tantamount to premature abdication. Goodnight, sweet prince. No more “Your Royal Highness.”

A great comic look at the Global Warming alarmists who are struggling to explain the cold weather in the Northern Hemisphere.  All Australians please request the Fairfax press carry this great strip.