The ABC is out of Control and working against Australia's interests

When the renewal came up, the tender panel twice recommended sky TV for the job only to see the government intervene and hand the contract to the ABC indefinitely.

JULIA GILLARD, PRIME MINISTER: On the Australia Network tender, the Government determined that it was best that the ABC do that work, and that was the right decision.

STEPHEN LONG, REPORTER: Perhaps, but the process was appalling

DAVID SALTER, MEDIA COMMENTATOR: A shemozzle from start to finish.

SKY NEWS REPORT: The Auditor General's report has criticised the Government's handling of the tender process, and says it's raised at least concerns of perception when it comes to a conflict of interest.

However, rather than heighten Australia's presence in the region, recently the AN has brought unverified unflattering reports about the Royal Australian Navy and has stirred up bad feelings with neighbouring Indonesia. (link)


“you would like the national broadcaster to have a rigorous commitment to truth and at least some basic affection for our home team”.

THE scathing description of the ABC as taking “everyone’'s side but Australia's’’ has a firm foundation. Not so the national broadcaster’s repeated airings of asylum seekers’ claims they were tortured by the Australian Navy.

The ABC’s too-quick-to-condemn reporting of allegations that sailors forced asylum seekers to hold on to hot engine parts was emphatically denied by the Navy. But the damage was done.

This was always a story that appeared highly unlikely. The burns displayed by asylum seekers on a boat that was turned back to Indonesia were almost certainly caused by their attempts to interfere with the engines, as has happened in the past when people smugglers’ boats have been intercepted.


If the ABC refuses to honor its charter and provide balance in exchange for our taxes, then it deserves all the cuts it’s going to get - and many more besides:

THE ABC’s $223 million Australia Network Asian broadcasting service is likely to be scrapped in the May budget to save money and end the pursuit of “soft diplomacy” in the region through television… Cabinet ministers believe the ABC’s coverage of Australia in the region is overly negative and fails to promote the nation as originally intended in the Australia Network’s charter by using the “soft diplomacy” of Australian news and cultural programs.

And as Andrew points out, there is not one ABC presenter today supporting PM Abbott today. And THEY say they are honouring their charter?

When prior Chairman Maurice Newman said that the ABC had to follow its charter and be even handed on "Climate Change, Christopher Warren, the Federal Secretary of the Media, Entertainment & Arts Alliance responded:

It is no wonder even minded Australians are getting hot under the collar because of the lack of objective journalism dished out by "our" ABC.


The ABC Is Out Of Control

Tim Andrews, of the Australian Taxpayers Alliance is leading a grassroots campaign to demad a review of the ABC

The ABC is out of control.
Last week’s disgraceful and unsubstantiated smears are just the latest in a radical ideological campaign by the taxpayer-funded broadcaster.
The ABC’s consistent support of fringe big-government policies, and its consistent refusal to present balanced reporting, is a national disgrace.
The ABC receives a staggering  $1.1 billion in our taxes a year – and for what?
It should surprise no-one that 40% of ABC journalists surveyed admitting voting for the Greens, and a futher 32% for Labor.

Where to from here?

It is time for a wholesale root and branch review of the ABC and its future in Australia. Use Australian Taxpayers Alliance's form (link) to contact your MP, Malcolm Turnbull, and Tony Abbott,  and demand a review today.

Although no Gosford Councillors attended the rally, shortly thereafter Gosford Council dumped the controverial clause on planning documents which labelled their homes as in danger of sea level rise.

Global warming is real, man made, and could cause the world's sea level to rise a metre by the end of the century, much higher than previously thought, according to the federal government's Climate Commission.

Typical alarmist stuff from Steffen and Flannery which even surpassed the IPCC's highest projection. The IPCC's latest range for Sea Level Rise is between 0.26 and 0.97 of a metre by the year 2100.

In 2011,  The Journal of Coastal Research published a peer reviewed paper by Phil Watson, the NSW Department of Environment and Climate Change's coastal unit team leader. Watson's paper called into question one of the key criteria for large-scale inundation around the Australian coast by 2100 -- the assumption of an accelerating rise in sea levels because of climate change.

It appears that, at least the NSW government is starting to read some of the real scientific literature and not the alarmist propaganda dissembled by the IPCC and the Climate Council. The Australian reports:

COUNCILS in NSW will be instructed to distinguish between "clear and present dangers" of coastal erosion and flooding and "doomsday" UN scenarios of global sea-level rises under a landmark policy on coastal planning and climate change to be unveiled today.

NSW Planning Minister Brad Hazzard will release a draft circular aimed at stopping some coastal councils from imposing draconian planning restrictions based exclusively on UN Intergovernmental Panel on Climate Change predictions of what could happen a century ahead.

Now all we need are the other states to make similar pronouncements. 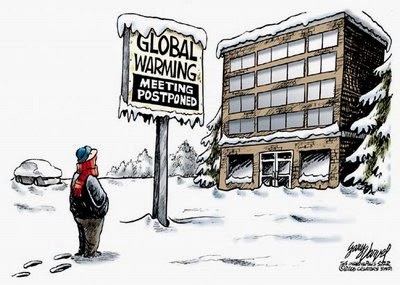 Some recent papers and articles have shown again that man-made (or anthropogenic) global warming (AGW) is a theory bereft of proof or logic.

The first is by an AGW scientist who has been  ridiculed in the past for his hyperbole and gross alarmism; Steven Sherwood. Sherwood's latest paper deals with aerosols and the fact so little is known about their climatic impact that no predictions about AGW can be made with certainty. The problem with aerosols has been known for some time but it is good to see the AGW high-flyers catch up!

The second is a post by Professor Judith Curry who looks at the uncertainties surrounding the calculation of Ocean Heat Content [OHC].

As is well known the answer by AGW scientists, notably Trenberth, for the failure of temperature to rise for 17 years is because the heat is being stored in the bottom of the ocean. Trenberth’s paper is critiqued here but as Curry shows the conclusions of the recent studies about OHC shows no increase in OHC since 2003 [the crucial date of the introduction of ARGO] by a majority of the studies, Levitus, Ishii and Smith with the studies by Dominques and Palmer having such wide uncertainty bands that their findings of an increase are problematic:

What makes the Trenberth view about the missing heat being in the ocean even more suspect is a recent post by climate researcher Michael Hammer. Michael has looked at the data from NOAA which measures the amount of energy leaving the Top of the Atmosphere [TOA] which is called outgoing long-wave radiation [OLR].

Simply put if the amount of OLR is increasing then there is NO radiation left on Earth to heat the oceans. Michael found a good match between the increase in temperature over the last 30 years and the increase in OLR: 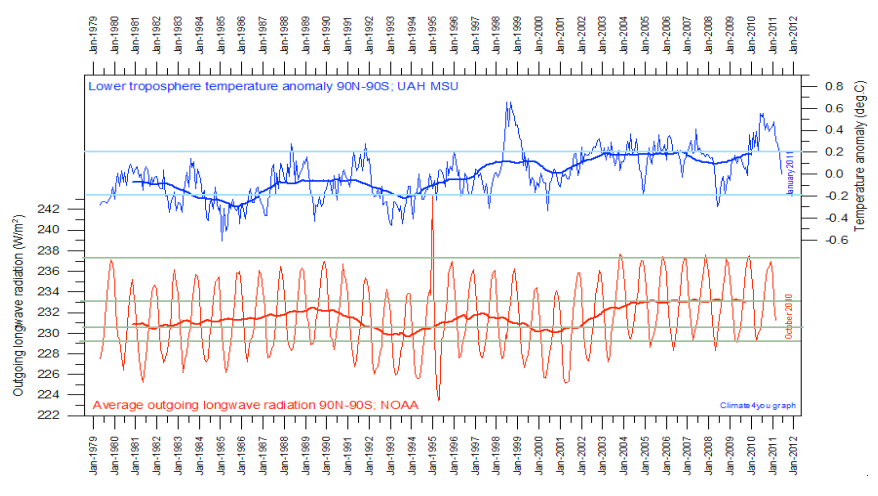 What this means is that when it warms the heat isn’t stored on Earth but, due to well known laws, such as Stefan-Boltzmann, the Earth increases emissions of radiation, reducing the effect of the warming.

A final article by specialist infrared astronomer, Dr Mike Sanicola, shows the warming isn’t even due to CO2. Sanicola shows that due to Stefan-Boltzmann the wavelengths of the radiation leaving the surface of the Earth are NOT wavelengths capable of being absorbed by CO2. In fact the relevant wavelengths are absorbed by H2O, water!

What Sanicola’s work shows is that the vast majority of back-radiation, the method by which AGW supposedly heats, is not done by CO2 but water. This fact has been noted by other researchers. Pierre Gosselin has looked at the MODTRAN system for measuring radiation in the atmosphere and found that back-radiation from CO2 only occurs when there is no water present such as in deserts: 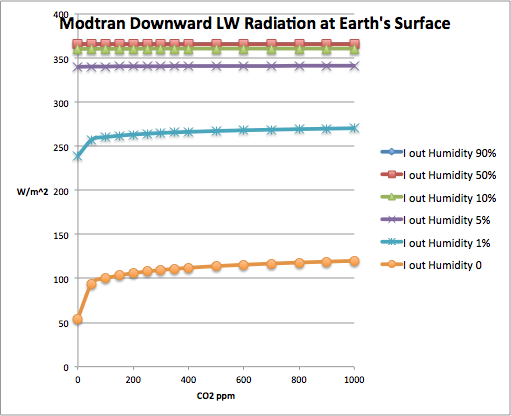 As can be seen from the graph of the MODTRAN data CO2 only causes a slight amount of back-radiation when there is less than 1% of water in the atmosphere.

The question remains, how much longer can supporters of AGW pretend there is any scientific justification for their belief?