The United Nations' annual climate change conference held in Warsaw from November 11-23, was a sedate affair that attracted little public attention. It's been a hard four years for international climate negotiations since the debacle in Copenhagen in December 2009. At least 40,000 people from around the world flew into Copenhagen to encourage world leaders to save the planet from the carbon dioxide emissions produced by, among other things, aeroplanes.

It didn't work out that way.

In the first place, the tens of thousands of NGO delegates from environmental groups were excluded when the 130 or so prime ministers and presidents arrived with their entourages because the convention centre could hold fewer than 20,000 people; and so the activists, who after all provide the political push behind the global warming agenda, had to be content with a massive protest rally in the streets (as snow fell gently on their stocking caps). Not even the magic provided by America's then new president, Barack Obama, could save the negotiations from imploding.(my bold)

We have reported Alan Caruba's report on Copenhagen in these pages:


The failure of recent COPs to come to any agreement is likely a good sign, suggesting that the climate change hoax is running out of steam, even among the nations that initially supported it.

However Myron sees it in a different light:


....the fact is that the international global warming establishment is too powerful and the economic interests supporting it are too large to go away quietly. Thus the Warsaw conference, known officially as COP-19 (for the 19th Conference of the Parties to the UN Framework Convention on Climate Change — or UNFCCC), made modest steps towards concluding a new agreement to limit global greenhouse gas emissions at COP-21 in Paris in December 2015.

Where is BigOil supporting our side of the debate when we need them?

Although there is no evidence that man-made climate change is causing extreme weather events ( and in fact the IPCC's AR5 refutes it) Naderev Sano, head of the Philippines delegation affected by Typhoon Yolanda (or Haiyan), announced on the first day that he would not eat during the conference "until a meaningful outcome is in sight"


The head of the UN Intergovernmental Panel on Climate Change and many of the scientists who contributed to the IPCC's Fifth Assessment Report, a draft of which was released in September, did nothing to contradict this obvious nonsense

Myron then goes on to talk of the "Green Climate Fund"


The fact that the cupboard is bare and likely to remain bare is now the chief concern of the poor countries. Many hours at the official sessions were devoted to speeches admonishing the US and the EU to commit to start contributing to the Green Climate Fund immediately and reach $70 billion by 2016. No agreement was reached in Warsaw on when, where, and how the money is going to be raised, so this will be a top agenda item when the 194 nations belonging to the UNFCCC gather late next year in Peru.

This was the fund that Greg Combet was going to contribute to from the carbon tax magic pudding: (link)

Instead of emissions of (vital-to-life) carbon dioxide (deceptively called carbon) being reduced, emissions are increasing:


Chinese emissions are now far above those of the US and the EU and are going to continue to rise rapidly as China builds scores of new coal-fired power plants. China's emissions have gone up so much that  per capita they are now close to the EU's.


Christiana Figueres, the highly capable and extremely well-connected Costa Rican executive secretary of the UNFCCC, challenged conference participants to keep their feet on the ground but to raise their eyes to the stars. I have given her advice some thought in the weeks since returning from Warsaw to Washington, but she has not shaken the conclusion I reached when Kyoto was negotiated in 1997: in the unlikely event that global warming turns out to be a problem, a UN treaty cannot possibly be the way to solve it.

BBC's Blinkered Bias Based on Brainwashing. 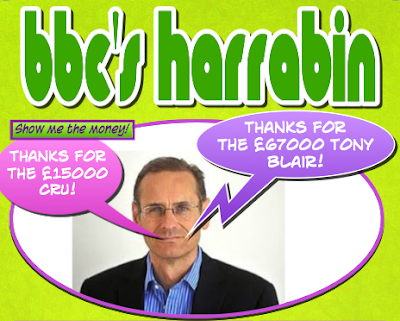 This blog has written before about the BBC's Roger Harrabin.


It was recently revealed that senior BBC journalist Roger Harrabin accepted £15,000 in grants from the University of East Anglia, which was at the heart of the ‘Climategate’ scandal, and then reported on the story without declaring this interest to viewers. (link)

This blog has also reported the beano that bonded the BBC's blinkered Bias:


The BBC’s editorial policy on ­climate change, however, was spelled out in a report by the BBC Trust — whose job is to oversee the workings of the BBC in the interests of the public — in 2007. This disclosed that the BBC had held ‘a high-level seminar with some of the best scientific experts and has come to the view that the weight of evidence no longer justifies equal space being given to the opponents of the consensus’. The error here, of course, was that the BBC never at any stage gave equal space to the opponents of the consensus. (link Jan 2011)


The BBC claim that seminar was given by “the best scientific experts”. But Richard North remembers hearing only “activists”, and even one of the two organizers — the International Broadcasting Trust (IBT) describe the guests as policy experts. The IBT, by the way, describe themselves as ‘lobbying Government, regulators and broadcasters’”. The other organizer was CMEP, Roger Harribin’s unit with an activist friend which is funded by big government (DEFRA ) and what do you know, the WWF.

Therefore the latest "hot news" comes as no surprise to us.

Well, it wasn't that covered up if we knew about it.  Evidence that a government had used a £67000 grant to warp science appears to be government paying for subversion of the state broadcaster. (Was the extra $190M in ABC funding that the Gillard Government decided on  - smack bang in the middle of the search warrant reports in other media - equally subversive? [link])

Bishop Hill's Andrew Montford also knew about it back then: (link)

According to Montford and Newbery, the key event was a BBC seminar at Television Centre entitled Climate Change – the Challenge to Broadcasting, which was made up of ’30 key BBC staff’ and ‘30 invited guests’.

It was actually Montford and Newbery's continuing investigation and FOI requests that led to today's headlines. (link)


In October 2007, while looking for something interesting to read, I came across a blog posting about a leaked BBC email. While it was interesting, it appeared relatively insignificant. There was no hint that this was to be the beginning of an investigation that would span more than four years and to lead to one of the greatest scandals in the history of the BBC.


In the Mail on Sunday today, David Rose has reported on some startling developments in the long, long quest for information about a BBC’s 2006 seminar on climate change. He has been very careful, as ever, to get his facts right, but writing for a popular Sunday paper necessarily means that much detail has had to be sacrificed in favour of a broad brush and the big picture. This is not a criticism in any way, it is just that a lot more could be said if space and the genre permitted.

These alarmists accuse BigOil of funding the realist side of the debate (Where's MY BigOil funding?) however the billions that governments have poured into the alarmist side would probably be enough to bankrupt a countering BigOil. As time is short, could we please have your response by January 27th.

(if the visit does not eventuate, any contribution will be refunded).

Chris Essex: One of the things I do know is where all the bodies are buried when it comes to models.

We're dealing with a fundamental problem. How people are able to articulate and  grasp technical subjects.

There is no such thing as oxygen, pre carbon dioxide.

It's almost impossible to articulate how barking mad a lot of this stuff is. 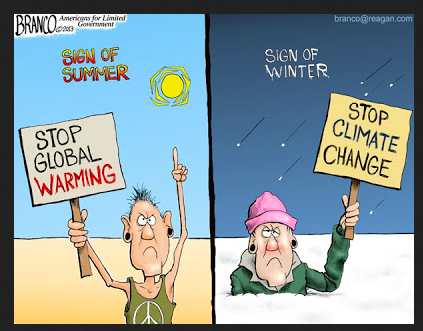 It really caused some confusion among the Alarmists. We, the ones they used to call (man-made) Global Warming Sceptics -or worse GW deniers, they now call "Climate Change Deniers." That made it very easy for us to say: "NO! We don't deny that climate changes. It has always changed."

This makes them look like the fools that they are. So why do they not revert back to (man-made) Global Warming Sceptics?

The Bristol Bay is one of four ice cutters that have been working around the clock to keep the shipping lanes open for freighters that use the Great Lakes and connecting channels to deliver goods between the Midwest and the East Coast. These massive ships range in length from 730 feet to over 1,000 feet — a ship that is 730 feet long can carry 37,000 tons. The Coast Guard said it was the earliest the ice had frozen here since the 1930s, and the river connecting Lakes Superior and Huron has been some of the toughest ice they have seen.

A chilly Arctic summer has left 533,000 more square miles of ocean covered with ice than at the same time last year – an increase of 29 per cent.The rebound from 2012’s record low comes six years after the BBC reported that global warming would leave the Arctic ice-free in summer by 2013.

A paper published by the Journal of Glaciology by researcher Kenneth Jezek (Link) "the southern half of Greenland was thickening by ~0.20 ± 0.06 m/year, with a possible increase in thickening rate to 0.28 ± 0.02 m/year for the later part of the record."

One last jibe at the warmists. From the Alarmists' propaganda site (UN)Skeptical Science's Trend Calculator. There has been cooling this century and for several years before that. 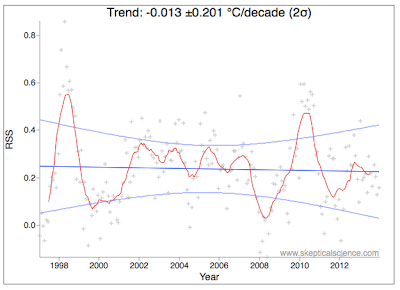 Yet the (UN) Skeptical UNScientists say:


All the indicators show that global warming is still happening.

Condemned by their own Trend Calculator.